Taliban commander: “By the grace of Allah Almighty, we are in control of the entire Afghanistan.” 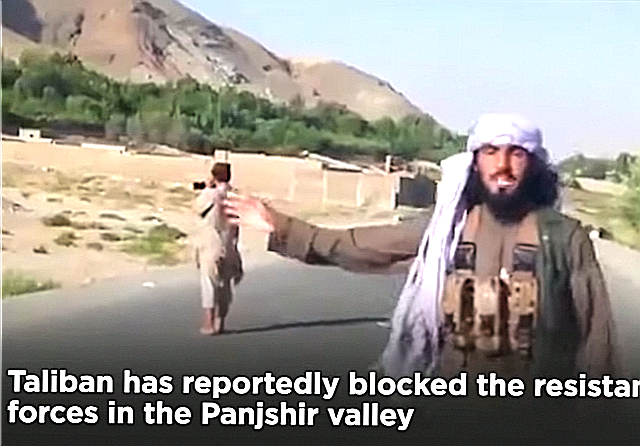 With the rest of Afghanistan under its control, the Taliban has launched a major offensive against the rebel-held northern province of Panjshir. Taliban “fighters stepped up an assault on the last remaining pocket of resistance being led by fighters opposed to their rule,” The Associated Press reported on Sunday afternoon.

The Taliban claimed swift victory over the last-standing anti-Taliban holdout just 50 miles north of Afghan capital Kabul. “By the grace of Allah Almighty, we are in control of the entire Afghanistan,” a Taliban commander declared.

The anti-Taliban Northern Alliance rejected those assertions. Deposed Afghan Vice-President Amrullah Saleh, now the leader of the resistance in Panjshir valley, said that the rebel forces had “held the ground.”

Three Taliban sources said the Islamist militia had on Friday seized the Panjshir valley north of Kabul, the last province of Afghanistan holding out against it, although a resistance leader denied it had fallen.

“By the grace of Allah Almighty, we are in control of the entire Afghanistan. The troublemakers have been defeated and Panjshir is now under our command,” said one Taliban commander.

Deafening volleys of celebratory gunfire resounded all over Kabul and Facebook accounts were full of mentions of the fall of Panjshir.

The rebel forces said that they repulsed the Taliban assault, causing heavy causalities among the jihadis. The Indian newspaper Hindustan Times reported the Northern Alliance’ statement:

Nearly 600 Taliban fighters were killed in Afghanistan’s northeastern province of Panjshir, the last Afghan province holding out against the hardline Islamist group, the Afghan resistance forces have claimed. “About 600 Taliban terrorists have been liquidated in various districts of Panjshir since morning. More than 1,000 Taliban militants have been captured or surrendered themselves,” the resistance forces’ spokesperson Fahim Dashti tweeted.

Though it is difficult to verify either of those claims, but some analysts believe that the Taliban may have made some inroads in the rebel bastion.

Still fog of war in Panjshir. All still unconfirmed but it looks bad. It appears the districts of Anaba, Shotul, Ruhka & Bazarak are Taliban controlled and possibly Dara as well. Fighting in Paryan reported. I've said from beginning the odds were long for Panjshir resistance.

Meanwhile the repression continues as Taliban militia enforces the Islamist-Sharia rule over the rest of Afghanistan. In recent day, there were fresh reports of executions and women rights abuses by the Taliban fighters from across the country.

On Saturday, the Taliban unleashed its crack troops against a peaceful women’s march in Kabul. “Taliban special forces in camouflage fired their weapons into the air Saturday, bringing an abrupt and frightening end to the latest protest march in the capital by Afghan women demanding equal rights from the new rulers.” The Associated Press reported.

U.S., West Hope for a ‘Moderate’ Regime Under Taliban

While the Taliban once again turns Afghanistan into an Islamist hellhole, Western politicians and military leaders are still hoping for the jihadi regime to mellow its stance.

Germany is apparently eager to engage in diplomacy with the victorious jihadis. “German Chancellor Angela Merkel is apparently counting on a willingness to cooperate on the part of the rulers in Kabul,” German state-run DW News reported on Thursday.

UK’s Chief of the Defensce Staff Nick Carter expected that the jihadi regime to be “less repressive” than the last time. “[T]here was a possibility the militant group would be less repressive than it was in the past,” The BBC reported paraphrasing General Carter.

“They’re going to need a bit of help to run a modern state effectively,” the British general said. “If they behave, perhaps they’ll get some help.”

Days after the Taliban took power in Kabul, the UK pledged to ramp up its humanitarian aid for the country. “The United Kingdom will double its humanitarian and development aid to Afghanistan to 286 million pounds ($393.34 million) this year,” the Reuters reported last month.

President Joe Biden has also resumed humanitarian funding going to the Taliban-ruled country. “The Biden administration is restarting U.S. funding to humanitarian aid programs in Afghanistan that were halted after the Taliban took control of the country,” The Wall Street Journal reported on Friday.

The article illustrates, once again, the point that fools are in high places in governments other than ours.
.

I think they are more than fools (they are fools), they are enemies’ of the people of their country.

As the Great Obi-Wan Kenobi once said, “Who is the bigger fool, the Fool, or the one who votes him/her into office?”

Aided by modern US weapons donated by the Biden (PBUH) Admin..

We taxpayers paid for those weapons donated by traitors (primarily Democrats and RINOs) to the enemy.

“…Western politicians and military leaders are still hoping for the jihadi regime to mellow its stance.”

Since nobody can be that stupid, that must mean that everything is going per plan.

Why do you call them rebels?

They’re the last remaining armed supporters of the legitimate Afghan government who are resisting the takeover of their country by a minority faction through force of arms.

I didn’t have much hope for them with no air support, a well armed and equipped Taliban .

More than 1,000 Taliban militants have been captured or surrendered themselves,” the resistance forces’ spokesperson Fahim Dashti tweeted.

And if the resistance forces leadership has any common sense they’ll interrogate those taliban captured/surrendered and then execute the lot. There is no need to coddle the enemy. Or keep them alive. Especially when the taliban would do the exact same thing to any resistance forces they captured.

and joe biden has abandoned our countrymen……………