“The edict makes Afghanistan the only country on earth to bar half its population from getting a secondary education.” 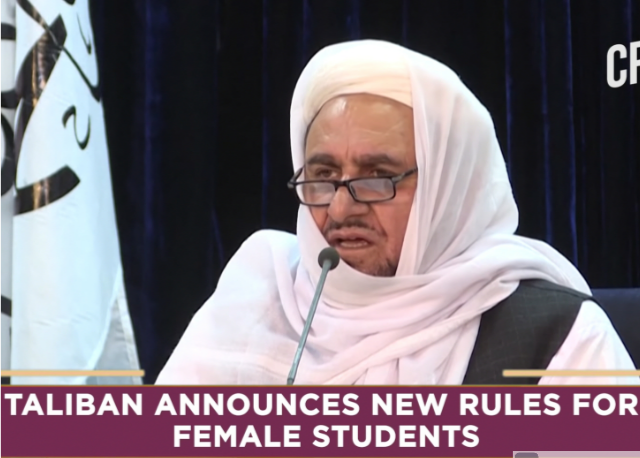 The newly-established Taliban regime has forbidden girls from attending secondary school in Afghanistan. The Islamic Emirate issued a decree ordering male teachers and students to resume their education, excluding Afghan girls from schools.

“Teenage Afghan girls weren’t allowed to return to school on Saturday as classrooms across the country reopened for the first time since the Taliban took power last month,” the Wall Street Journal reported.

British newspaper The Guardian reported the exclusion of Afghan girls from secondary education:

The Taliban have effectively banned girls from secondary education in Afghanistan, by ordering high schools to re-open only for boys.

Girls were not mentioned in Friday’s announcement, which means boys will be back at their desks next week after a one-month hiatus, while their sisters will still be stuck at home.

The Taliban education ministry said secondary school classes for boys in grades seven to 12 would resume on Saturday, the start of the Afghan week. “All male teachers and students should attend their educational institutions,” the statement said. The future of girls and female teachers, stuck at home since the Taliban took control, was not addressed.

The edict makes Afghanistan the only country on earth to bar half its population from getting a secondary education.

The Taliban is waging a real war on women since it took control of Afghanistan a month ago. The Islamist militia is demanding Afghan families to give their daughters as young as 15 as wives to Taliban fighters.

Earlier this month, the Taliban Special Forces used live ammunition to break up a women’s rights march in Kabul. “Taliban special forces in camouflage fired their weapons into the air (…), bringing an abrupt and frightening end to the latest protest march in the capital by Afghan women demanding equal rights from the new rulers,” TV channel France24 reported.

The recent steps taken by the Taliban have dashed the naïve hopes of many in the mainstream media and the left of seeing an “inclusive” rule in Afghanistan.

In a latest move, the new Islamist regime has disbanded the minister of women’s affairs, replacing it with the department of moral police.

Workers in the Afghan capital Kabul replaced signs for the country’s women’s ministry with those for the Taliban’s moral police on Friday, as female former employees of the department said they had been locked out of the building.

A sign for the building was covered by a replacement in a mixture of Dari and Arabic, reading “Ministries of Prayer and Guidance and the Promotion of Virtue and Prevention of Vice” on Friday, according to photographs and Reuters witnesses.

Female employees said they had been trying to come to work for several weeks only to be told to return to their homes, according to videos filmed outside the building seen by Reuters.

The gates of the building were finally locked on Thursday, one of the women said.

The new department, probably modeled on its Iranian counterpart, will mete out severe punishments to enforce Sharia law. During its previous rule, the Taliban stoned women to death for defying the Islamic dress code.

State or process of divergence from normal. A psychiatric certificate of #NoJudgment #NoLabels should suffice.

Afghan women and girls are finding out the hard way just how much the Twitter slogans of spoiled rich white liberal ‘feminists’ are worth in the real world.

so true–all the noise, the huge protests, the activism from all these woke women is deafening, n’est pas?

Actually, it’s Islamophobic for Afghan women to object to forced clitoidectomies performed with rusty knives, burquas, and being stoned for adultery. I call on the pampered rich woke white women of Twitter to work hard and cancel those bigoted Afghans women.

I doubt that Afghans, with their practice of bacha bazi, had anything to learn from SF’s Castro district.

Taliban makes “girl students“ an oxymoron. So that makes them plain morons?

USA HAS ITS OWN WAR ON WOMEN.

Biden has lost the moral high ground on women’s rights. He cares more about the 1./500th of the population who think they are the opposite sex – than 1/2 the population (women).

The women in Kabul put American feminists too shame. In Kabul, the protest at risk of death and whipping to support women’s rights. In the USA, there is not a peep from feminists. Apparently, they only protest when people attempt to save women’s unborn children.

Well at least they still have their heads, that’s more than I can say for some of the boys.

If your only religion mission of women is bare foot and pregnant what else do they need to know.?

THIS …. is the result of not have a zero-tolerance policy for correct pronoun usage. And global warming.

Oh dear! However will these girls grow up to be prime ministers, or grievance studies professors?
It’s cruel to limit their life choices to either motherhood or Vice Presidencies.

I’m sure Antony Blinken will get right on this outrage to inclusivity. (*Rolls eyes*)

According to the inpsufferable pspokes-wench, Psaki, Xi-den and the Dhimmi-crats are still expressing optimism that their Muslim supremacist/terrorist “partners,” the Taliban, will take a break from their national sport of tossing homosexuals and trannies off of rooftops; will implement “Drag Queen Story Hour” at local libraries; and, will fly the rainbow flag over several mosques, during “Pride” month.

“We know that the Taliban are aware that the eyes of the world are upon them, watching to see if they will live up to ‘Progressive’ values.”

So you CAN’T trust the Taliban? Wow, who woulda guessed.

Sorry, folks, but if you’re so concerned about the plight of women and homosexuals in Taliban Afghanistan, collect your own money to raise a Monstrous Regiment of Women or two to seize the passes of the Hindu Kush and hold hostage the nuts of every Afghan man with a beard longer than two inches until the bacha of bacha bazi gets as much respect as his patron and no Afghan adulteress need face execution..

Seriously, do we really believe that the whole world is yearning for free access to abortion, same-sex “marriage”, and condemning confused kids to a lifetime of expensive hormone treatments and irreversible surgeries? If the education of Afghan women is so important, let the Afghan women themselves turn their country into the one with the largest number of battered husbands and let them turn on the whip-wielding Talebs in the street.

have a couple of sjws in the family(both women)both educated, professional, successful–gave-up trying to reason with them–finally left each of them with the same question: “aren’t you self-aware enough to examine YOUR OWN LIFE and realize that the very institutions, viewpoints, processes you want to destroy are the ones largely responsible for the opportunities you’ve had as an american woman? ”

They sound like some I know–good reasons to repeal the 19th Amendment. I belong to a generation marked by lots of women who admired Mao’s “women hold up half the sky”–even though Mao was notorious for changing women more often than he changed his underwear.