“I will hire you to help Texas secure the border.” 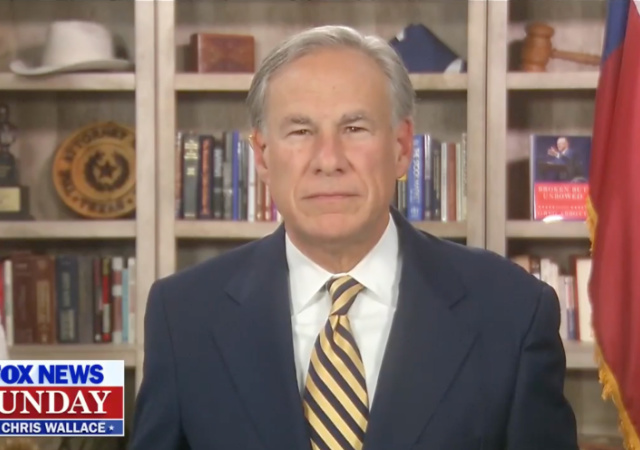 “Secretary Mayorkas and, if I can be candid, even President Biden, they are in dereliction of duty,” Abbott said on “Fox News Sunday.”

You know it’s going to happen. Despite the evidence that proves no border patrol agent whipped Haitian migrants and the photographer even saying he never saw whipping the administration will not let go of the absurd claims.

You know it’s because they are doing their best to deflect from the border crisis of their making. The stupid narrative gives them an opportunity to avoid responsibility:

“They wouldn’t have been in that situation had the Biden administration enforced the immigration laws,” Abbott said. “If he takes any action against them whatsoever – I have worked side by side with those Border Patrol agents – I want them to know something. If they are at risk of losing their job by a president who is abandoning his duty to secure the border, you have a job in the state of Texas. I will hire you to help Texas secure our border.”

I keep using the word moron because I won’t use the words I want to use out of respect for Professor Jacobson.

Nevertheless, Biden vowed that the agents, who were removed from field duty pending an investigation, will “pay.” Abbott was incensed by the president’s treatment of the agents.

“What the president said going after the border patrol who were risking their lives, working so hard to try to secure the border. If he takes any action against them whatsoever — I have worked side by side with those border patrol agents — I want them to know something,” Abbott said. “If they are at risk of losing their job at a president who is abandoning his duty to secure the border, you have a job in the state of Texas.”

The governor added: “I will hire you to help Texas secure the border.”

They would make good Texas Rangers. In that case they would have safe jobs until Texas gets blue enought to elect a democrat governor.

What makes you think Texas would have to get blue for Dems to cheat?

I suspected something like this may be coming. Abbott is not perfect, but, he seems to come through most of the time.

Except in the crisis of the moment.

Article IV Section 4
The United States shall guarantee to every State in this Union a Republican Form of Government, and shall protect each of them against Invasion; and on Application of the Legislature, or of the Executive (when the Legislature cannot be convened) against domestic Violence.

Texas, and by extension the rest of the country, is being invaded. Why hasn’t he convened the Legislature to apply to the Federal Government for protection from invasion? If he cannot, why hasn’t he done so himself? We know what the result will be, but he hasn’t done it. Why hasn’t he called up the Guard to the border? All of them. We already know we can stop them at the border by a show of force. We also know other states will assist and send their Guard.

Screw Biden and his band of illiterates. Take some action, Gov Abbot!

Why not start hiring them now? And, why not use whatever level of force is necessary to dissuade illegal entry?

They may not want to give up their Federal pensions just yet.

I laugh out loud every time “tough guy” Joe Biden shows up. These guys are going to “pay”, he was going to beat Trump up “behind the gym”.

The only thing Joe ever beat behind the gym was his meat.

Why not deputize any and all who live on the border and want to volunteer?

Not to invent a pun, but we’re bordering on that. Get it? Border? Ok, maybe I was.

I keep watching Raoul Benavidez talking about why he’s proud to be an American. Puts me in mind of my family. And my adopted Namibian daughter. I wonder, why doesn’t this generation love this country like we do?

Also, the Biden junta would use the excuse that we’re defending the border to kill us. Which is why, the only reason why, I mention my adopted daughter is Namibian. Herrero to be exact. Who I have taught to shoot and would be right down with us.

If the MFM can label Larry Elder as the face of white supremacy they can try that with anyone. But, she can shoot.

Otherwise I’d just have been wasting my time. I used to host foreign officers, officially, it was part of my liaison duties, from all over the world and teach them how to shoot and make Italian food.

Enough with the kabuki theater. Where is the National Guard? It’s the national border! Send them to the border with loaded guns and orders to secure the border! I am as tired of Abbot as I am of anyone else. Too little too late and a lot of it just for show. This isn’t complicated. Just get it done already!

Because the National Guard is a federal creation. Oh, you thought the NG belonged to the states? No, sorry, the NG was created and is funded by Congress. Governors may use the NG to deal with state issues (floods, hurricanes, riots) but the NG can be federalized at any time by the DoD and President for any reason whatsoever.

So if Abbott were to call out the NG, the DoD would (that very day) federalize them and order them home.

And that’s why Abbott doesn’t call out the NG.

It’s also a rubicon of sorts.

What happens if Abbott calls out the Texas NG, the DoD orders them home, and the NG officers refuse?

At that point things get mighty tense.

Texas already has been using NG, Texas Rangers and DPS resources on/along the border for years. The problem is that when they apprehend illegals, their only avenue is to turn them over to CBP, who promptly releases them. There is really no TEXAS law that makes it illegal to cross a border, international or otherwise, and I don’t see the lege voting to set up walls along the La/Ark/OK/NM borders (They DID pass legislation, which is now law, to fund the wall on the Mexican border.)

One more thing about Del Rio. All of those thousands of Haitians you saw under the International Bridge were on the US side of the border, but they were OUTSIDE OF THE FENCE! The Feds were the ones who physically brought them inside and then shipped them out across the country (or dropped them off at a bus stop). The problem isn’t one of having a wall, it’s using it for its intended purpose.

“There is really no TEXAS law that makes it illegal to cross a border, international or otherwise, ”

But there are laws against trespassing, which Abbott is using.

SDN: There are laws against littering too, but you can’t really enforce them against the corpses they keep finding near the Falfurrias checkpoint.

Exactly. We need to go there on everything. We can’t even do that over the masks. What is wrong with everybody?

What do you mean, everybody? Masks? Kids are being irreparably harmed by this masking s***. A basic skill children have to learn is to recognize facial expressions. They can’t do that if everyone is wearing a diaper.

I can prove this with basic primate studies. It works the same way. It’s a basic social skill.

They need to change the law so the ranchers and farmers along the border can shoot trespassers.

Once again, let’s not try. Trying is the first step to failure. Do it! Let’s have that fight! Will the US military (particularly those in the National Guard) obey such a blatantly unconstitutional order? Let’s find out!!! All it takes for us to go all jimmy legs and jazz hands is the threat that the government will do something unconstitutional? What is wrong with you? Are you in this fight or not? Or maybe the right question is “Whose side are you on anyway?”

The default position in the armed service I was in back in 2008 was that an order was lawful and constitutional. Because that’s the easiest position to take. Anything else requires thinking. And thinking requires courage.

Tell me where that isn’t in short supply?

September 12 is a tale of victory. 21 Sikhs against thousands.

Thinking about the men who died in the sand box.

I will point out that the current calamity we have at the border is a bipartisan screwup. DHS Secretary Alejandro Mayorkas got at least 6 GOP votes for confirmation:

Vile dotard Xi-den, Mayorkas and the Obama chaperone/caretaker/marionette-handler cabal controlling dotard Xi-den should be publicly flogged for brazenly lying and perpetuating this utterly contrived “whipping” incident, consequences to innocent people’s careers and reputations be damned. That not a single person in the Xi-den cabal possesses a scintilla of integrity and honesty to refute the Dhimmi-crat media prostitute-lackeys’ utterly contrived propaganda lies, is astounding. We are witnessing the evil nature of the vile Dhimmi-crats. Truth and facts are an inconvenience, to be dispensed with, entirely, whenever political self-preservation and one’s political agenda demand it.

as they say in Texas, Abbott is all hat and no cattle!

Well, except that he’s already arresting illegals for trespassing.

Abbott should additionally stick it in Biden’s eye by promising to outfit them with real whips if they come over.

Didn’t Abbott say he’d imprison those he caught on the Texas border trying to illegally enter our country? What happened with that?

The SC have made the Feds the only enforcer of immigration and our borders.

I would like Texas to make it illegal for non-citizens to work without paying a $1,000 fee every year.

Oh, and make it legal for people to shoot trespassers.

It’s already legal in some circumstances.

Tried to contact you about Telegram, but any time I click to email you, ‘Safari can’t find address’ (???) Same thing as Telegram. I wanted to see what Telegram is about and if I saw LIF in it. No success. What can I do?

That is called “not letting a Democrat created crisis go to waste!”