Poynter reported one Philly Inquirer manager as explaining that editors who didn’t view “antiracism” as a “core value” could either “change or opt out.” 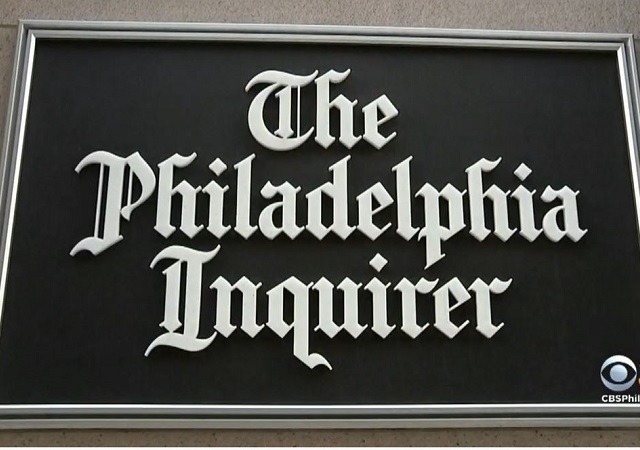 Many of you may recall how last year, about a week or so after the protests and the violent rioting and looting over the officer-involved death of George Floyd began, that the Philadelphia Inquirer landed itself in hot water with some of its “woke” reporters and readers after running an opinion piece that included the headline “Buildings Matter, Too,” which was a play on the “Black Lives Matter” slogan.

The piece, written by the paper’s design and architecture critic Inga Saffron, rightfully argued that in torching and destroying entire city blocks, which is what happened in big Democrat-run cities across the country like Minneapolis and Philadelphia, that so-called “protesters” were hurting some of the very people they claimed they wanted to help.

The headline was initially changed to “Black Lives Matter. Do Buildings?” and then later to one that more explicitly reflected that message (“Damaging buildings disproportionately hurts the people protesters are trying to uplift”) just so offended readers and reporters would know the paper wasn’t really equating black lives to buildings, and an apology was issued the following day. But it wasn’t enough for the roughly 40 reporters who called in “sick and tired” two days after the column was published:

These "journalists" live in a bubble. They're more outraged by a "Buildings Matter, Too" headline than by the destruction of entire neighborhoods in their own city.

This surreal report from CBS Philly at the time on the uproar over the headline shows how “woke dogma” pretty much took over the paper and city in the midst of the protests and rioting, noting that one restaurant that graciously offered free meals to Philly police officers ended up rescinding the offer after some in the community alleged they were picking sides in the Black Lives Matter/Defund the Police fight:

In addition to the reporters who didn’t show up for work in protest, senior VP and executive editor Stan Wischnowski, who had worked for the paper for 20 years, stepped down, though it’s still unclear whether he was forced out or made the choice himself.

The result of all the blowback the paper received over the headline and what reporters described in their nastygram as a newsroom where the opinions and input from journalists of color were routinely ignored, the Philly Inquirer began a campaign to soothe the ruffled feathers of their upset staff members by seeking to further “diversify” their newsroom and make it more “woke.” The project, which is still ongoing, is titled “Inquirer for All.”

Over a year after that process started, Poynter has released a progress report on a six-month audit they’d done on the paper’s progress on the “antiracist” front. The report included some rather unintentionally illuminating and troubling information about the procedures they’ve put in place:

Creating an antiracist work culture requires more than hiring BIPOC journalists. Staff expressed concerns about retention of BIPOC staff (just under half of those who left in the six months following the audit identified as BIPOC journalists). While some managers suggested that it was expected that talent would be poached because the Inquirer was no longer viewed by some as a “destination newspaper,” other staff suggested more needed to be done to create a working environment in which BIPOC journalists felt their life experiences were acknowledged and welcomed.

Finally, building an antiracist work culture requires management to hold employees accountable and to incentivize antiracist newsroom practices. One way the Inquirer is attempting this is by building DEI goals into their performance management system, particularly for editors. As one manager explained, centering antiracism as a “core value” meant editors who were not on board with that would experience “pain points” that they hoped would spur shifts: “Either you change or you opt out.” [emphasis mine]

Author/essayist Wesley Yang broke down the findings on his Twitter feed:

The purge is never finished

“Journalism norms and traditions that have historically bolstered whiteness including the dominant interpretation of objectivity as “the view from nowhere.””

There is a real critique of the view from nowhere.

In practice this means, you must publish maudlin cringe pic.twitter.com/WkudmmMxU7

Though these “woke” approaches, unfortunately, appear to be the wave of the future in American newsrooms, don’t be surprised to see many of them eventually collapse under their own weight as we’re seeing happen slowly at the New York Times, where mob rule saw a 47-year-veteran of the paper forced into resigning earlier this year after he was falsely accused of racism simply because he used the “n-word” in the course of conversation with a journalism student who specifically asked him a question that revolved around the use of the n-word.

As these generational battles between older liberals and younger ones in U.S. newsrooms continue to take root, a key point to keep in mind is that while it’s not necessarily wrong to want a diverse newsroom, what is wrong is when calls for diversity are used as launching points to do they very thing white editors and managers are accused of doing: silencing voices for daring to engage in WrongThink.

Two years ago, New York Times science columnist John Tierney, who is also a contributing editor at City Journal, opined that the best approach to counter this mindset was a two-pronged one:

But all editors and publishers can take a couple of basic steps. One is to concentrate on hiring journalists committed to the most important kind of diversity: a wide range of ideas open for vigorous debate. The other step is even simpler: stop capitulating. Ignore the online speech police, and don’t reward the staff censors, either. Instead of feeling their pain or acceding to their demands, give them a copy of Nat Hentoff’s Free Speech for Me—but Not for Thee. If they still don’t get it—if they still don’t see that free speech is their profession’s paramount principle—tactfully suggest that their talents would be better suited to another line of work.

No more Galileos, or Newtons, or Maxwells, or Einsteins, or Bohrs, or Feynmans, etc. Too objective. And racist.

The plan to destroy America, and Western Civilization, in a nutshell.

It will be replaced with a Marxist DEI utopia.

After the Marxists take over they’ll dispense with the DEI part.

Will American voters buy into this? Will they even know what they are voting for or against? Will their votes even matter going forward? Or are we past the point of no return?

It doesn’t matter if American voters buy into it or not – It doesn’t matter who votes or how; what matters is who COUNTS the votes. This last elections proves that they have that particular bump in the road covered. From here on out, every election will be rigged.

Pleas do not use DEI (the left’s preferred acronym).

DIE is the more accurate acronym.

Because the whole point is that American society DIE.

As a se Pa my whole life gre up reading it, but maybe 10 years ago had it with the Leftists writers and stopped getting it. They all can dry up and I wouldn’t care.

This is all academic at this point. The media has been siezed as have schools and government at all levels. The left does not tolerate freedom of speech or differences of opinion. They are Bolsheviks in every sense of the term.

Although insurance is essentially a socialistic scheme where losses from accidents and natural disasters are socialized and only very modest profits are tolerated the left seems to not understand that riots are NOT natural occurrences and insurance companies will decline to insure that risk. Businesses that can operate without insurance are very small typically mom and pop businesses that don’t have the resources or the inclination to rebuild after a riot. If they do start over they do so in a safer neighborhood far from violence and crime.

Humorless people expecting to be offended generally are. They don’t act from a place of goodwill but from a perverse combination of maliciously aggressive victim hood. They revel in being a victim because then they can transition into the righteous accusations of isms.

They don’t seek clarification to make sure they understood what was stated. They don’t review context. They simply attack. These are the people who, in their own minds, are never wrong. Their virtue is always superior to ours.

If you find yourself wondering why someone is hectoring you but hasn’t the common decency to politely ask for clarification beforehand do not even attempt to apologize. Remain calm and provide the clarification they neglected to ask for. Not for the weirdo but for the audience their lunacy attracts. They walk away.

while it’s not necessarily wrong to want a diverse newsroom

To the Wokesters, racially diverse is racially homogeneous.

There DOES seem to be an unwritten policy of forcing inter-marriage.

In these current times a person is forced to choose a side. Before you could stay in the middle without getting harassed. One result is a lot of people are choosing their conservative values. Hence “Get Woke Go Broke” is a real thing.

Reporters can no longer report. They must spout carefully engineered propaganda. Lives don’t matter, only The Narrative matters. People of Color must die on the alter of BLM to ensure that the USA and the the ideals of equality and freedom and personal choice are destroyed utterly and completely.

Philly is a dysfunctional urban s-hole run by incompetent grifters including a mayor who could barely finish high school and a city council with a collective IQ of minus-50. The school system is a nightmare of aging cinderblock asbestos filled warehouses with feral children who can barely read at a 4th grade level at graduation. Voting Democrat is naturally a religious imperative.
Philly print media has been garbage for years. Inga Saffron and the food critic Craig LeBan have been two of the only decent writers at the Inquirer for a long time along with some good sports writers at the Daily News. Otherwise it’s nothing but screaming headlines straight from the DNC playbook, reprinted wire reports, and race obsessions from really poor writers. Will Bunch is the worst of the worst.

The so-called Mainstream Media needs to be classified as a PAC and be bound by the financial laws. They are so biased, they don’t report news they fabricate anti-conservative findings.
They blew out of proportion all of the Trump Congressional hearings.