“‘Happy to die here, but with dignity and pride,’ another said, while a third accused the U.S. of prioritizing Afghan government elites with contacts in the U.S…” 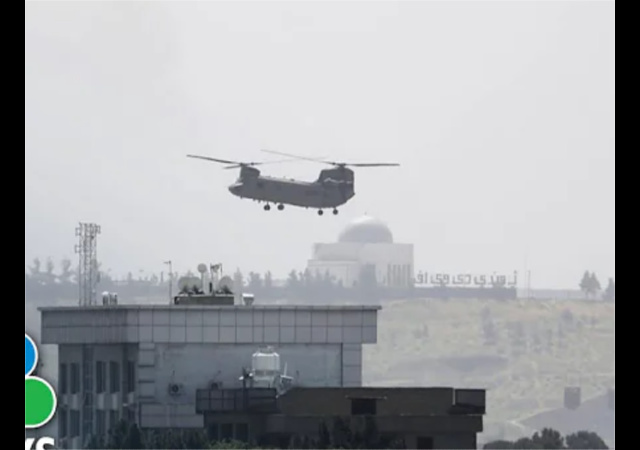 They also have “a sense of betrayal and distrust in the U.S. government.”

The cable, which was sent Saturday, said memos were sent Wednesday inviting Afghan staff members at the embassy to head to Hamid Karzai International Airport in Kabul. It told them to take food and to prepare for difficult conditions.

“However, no one anticipated the brutal experience that occurred,” the cable said.

Staffers reported being jostled, hit, spat on and cursed at by Taliban fighters at checkpoints near the airport, it said, adding that criminals were taking advantage of the chaos while the U.S. military tried to maintain order “in an extremely physical situation.”

Some staff members reported that they were almost separated from their children, while others collapsed in a crush of people and had to be taken to hospitals with injuries, the cable said. Others said they had collapsed on the road because of heat exhaustion, it said.

“It would be better to die under the Taliban’s bullet” than face the crowds again, a staff member was quoted as saying in the cable.

“Happy to die here, but with dignity and pride,” another said, while a third accused the U.S. of prioritizing Afghan government elites with contacts in the U.S., who already had the correct paperwork and other ways to flee the country.

A staff member said someone sprayed his home with paint. The Taliban has a history of doing that “to identify homes’ occupants for further questioning.”

That person said the paint job forced the family “to flee their home but was unable to get to the airport.”

The State Department only gave NBC News a preprinted statement without addressing the concerns in the cable:

A State Department spokesperson said the U.S. has a “special commitment” to local embassy staff members who “have suffered hardship, pain and loss because of their dedication to working with us to build a better future for all Afghans.”

The spokesperson added that the U.S. has been “working tirelessly to improve access to the airport” and to assist people eligible for flights.

EXCLUSIVE: Local U.S. Embassy Kabul staff is losing faith in evacuation efforts, per cable obtained by @NBCNews. “It would be better to die under the Taliban’s bullet” than face the crowds again, said one.“Happy to die here, but with dignity and pride,” another said. https://t.co/zFyyQzblgr

They’re not the only ones!

The new list of military gear left behind – and pallettes of cash – make it evident Biden/Harris intentionally armed the Taliban to the teeth with the latest US military tech and weaponry, and lots of it.

These weapons will find American victims, and on American soil, if they’re not already flowing into our southern border.

And the Americans still there will leave in a planned hostage exchange. The non-evacuation is part of the plan. Things will get so bad, we will be “glad” to release terrorists to get our citizens home.

And, living in Texas, I think about those weapons given to Taliban. The pieces fit when you look for the larger picture.

Armed to the teeth so there is an excuse to a) buy more from defense contractors who only exist due to the DoD, an b) kill off more of our healthiest, hardiest, most intelligent breeding stock, like we’ve been doing since Korea.

Not to mention the materiel that will be sold to Hezbollah, Al Queda, ISIS, etc

After doing everything it could to get rid of Trump and put Dementia Joe in the WH, the Deep State is displeased with Comrade Biden.

“…the Deep State is displeased with Comrade Biden.”

Are they? What if Biden’s role is to take the fall for the damage being waged against the USA? “Incompetency” is such an easy label to hang on Biden and that then halts the questions so the handlers escape.

Biden is a tool. I think the deep state is pleased with how this is going…except for the growing resistance.

Notice how the Bush crowd (Hayden, Condi Rice, etal…) are showing their smiling faces again pushing their neocon crap and bashing Trump voters. There really is an air of dissonance in the establishment reaction to all of this. The Uniparty is getting what it wants… or maybe what it planned.

Fire Blinken. And everyone else.

Not meant to be a reply.

Carpet bomb Kabul and take out the military stockpile Biden donated to the Taliban. Leave nothing standing.

““Happy to die here, but with dignity and pride,” another said, while a third accused the U.S. of prioritizing Afghan government elites with contacts in the U.S., who already had the correct paperwork and other ways to flee the country.”

Who set THAT priority? Certainly not America First “domestic terrorists”.

Both the military and the state department should have trained staff to speak the language in twenty years. How many have died as a result of translator spies???