NU does not currently mandate CRT study or training, but it missed an opportunity to make a powerful statement in favor of the academic freedom to be free from CRT mandates. 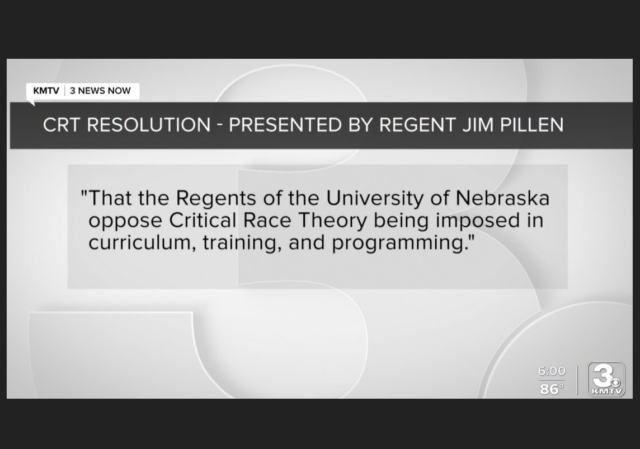 One of the cutting edge academic freedom issues in higher education is the freedom to be free from coercive Critical Race educational and training mandates.

We saw this play out at Cornell, where there was a Faculty Senate consideration, under the aegis of a presidential “anti-racism”initiative, to impose mandates on students and faculty. That effort evoked substantial, and surprising, faculty pushback on the ground that such mandates violated academic freedom. The result was a muddled mess with no clear consensus in favor of mandates. Even faculty who generally supported CRT and so-called “anti-racism” efforts had concerns over mandates.

At the University of Nebraska, NU regent and Republican gubernatorial candidate Jim Pillen proposed a resolution opposing mandates. As reported by Fox News:

“As a father of four, a University of Nebraska regent, and a candidate for governor, I cannot be more clear: I believe critical race theory is factually and morally wrong,” Pillen said in a press release. “I do not believe in teaching children to judge each other on the basis of their skin color. There is no place in our classrooms for this ideology.”

According to Pillen’s campaign, the Board of Regents will address the resolution at August’s meeting.

While it’s difficult to track resolutions like these, Pillen’s campaign claims he’s the first public university regent in the country to introduce such a resolution.

I was quoted in the Fox News article pointing out that this resolution would stike a balance that favored academic freedom and free expression:

“Numerous universities and colleges have issued public statements supporting, and in some cases mandating, a critical race theory approach to the curriculum, usually using code words such as ‘antiracism’ or ‘equity,’” he told Fox News via email.

“The proposed U. Nebraska Regents Resolution stands apart in that it gives an honest account of the downside of CRT in practice, which too often results in a narrowing of campus viewpoints. The resolution does not ‘ban’ CRT from the curriculum, to the contrary, it opposes ‘imposition’ of CRT, and in so doing seeks to foster an open campus intellectual environment.”

The resolution met with opposition form NU Faculty Senate and the Presidents and Chancellors of NU campuses, who portrayed the resolution as contrary to academic freedom:

The free and open pursuit of ideas is a cherished principle in higher education, and its preservation is vital for any great university. As our policies and practices make clear, the University of Nebraska is strongly committed to academic freedom. We support and defend the liberties our teachers and learners have to freely discuss ideas in and outside of the classroom….

As we have shared with Regent Pillen, we have significant concerns about the resolution and how it would be interpreted by the faculty, staff and students we hope to recruit and retain. We will continue to work together and with the Board to vigorously protect and defend academic freedom at the University of Nebraska.

The Resolution was supported by Governor Pete Ricketts.

The University of Nebraska Board of Regents will be voting on a resolution opposing Critical Race Theory in the coming weeks. Thank you to NU Regent Jim Pillen for leading the fight against this divisive and anti-American philosophy! pic.twitter.com/UaNvzsD2aX

The Regents just voted down the proposal 5-3:

After drawing strong push back from students and faculty, the University of Nebraska Board of Regents rejected a resolution Friday that would have banned imposing Critical Race Theory on university students….

Multiple instructors said they use elements of CRT in their classrooms.

“It is not an ideology, it’s a theory, it’s part of our toolbox,” said Regina Werum, a sociology professor and member of the Faculty Senate.

Pillen pushed back, saying the resolution doesn’t stop the theory from being taught on an elective basis. Instead, it affirms the university’s commitment to not discriminating against students….

While their votes don’t count for the official total, all four student regents voted against the resolution, including Batool Ibrahim of UNL, who was the only person of color voting….

NU does not currently mandate CRT study or training, but it missed an opportunity to make a powerful statement in favor of the academic freedom to be free from CRT mandates.

Didn’t Nebraska once have a NCAA football team?

When we have a nation full of jock-worshippers, academics mean nothing.

Academics in America has had no meaning in over one half of a century.

“Multiple instructors said they use elements of CRT in their classrooms.
“It is not an ideology, it’s a theory, it’s part of our toolbox,”

The problem is that that’s even worse.

It’s one thing to say a college “teaches about” CRT, like they would “teach about” Marx, or “teach about” abusive relationships. That’s academically justifiable.

It’s quite another to say that they USE CRT principles and frameworks while teaching other things. That’s the insidious part. That is what needs to be embargoed.

I’d rather be “taught about” bullying than be bullied by an accounting professor.

University of Nebraska will soon regret that they did not take an affirmative stand against CFT and its many insidious forms.

Those who push this crap are very very good at sneaking it into the curriculum. There is a reason that teachers and professors have resisted showing their lesson plans. They want to stealthly insert this in your kids mind. Make it seem normal. By the time U of N actually sees it overtly in classes – its too late.

At least the question was put to those who need to be forced out of the safety of their shadows. Now they are on record and will have to be forced to explain over and over again why… if we care to keep asking. It’s only by repeatedly forcing them to explain themselves on record their own idiocy will become too much of a burden for them. I expect many of them will start resigning as the pressure keeps building.

This same dynamic came up in criticisms of DeSantis’s opposition to mask mandates by government offices at any level..

They’re being sold as restrictions on mask wearing by anyone. Anyone may wear a mask at anytime as they see fit. No one is preventing any private entity from requiring masks (eg stores)

The message from the media?
Freedom is Slavery

Nebraska has. the good. fortune of popularly elected regents. A movement should be launched to remove the five regents from office.

5-3 vote with four students? Something does not add up.

U of NE. Just another school with a worthless degree. I hope they also teach their students this line: “Do you want fries with that”.