The woman who hates the police and doesn’t want them to exist had *two* sheriff deputies on her private security detail. 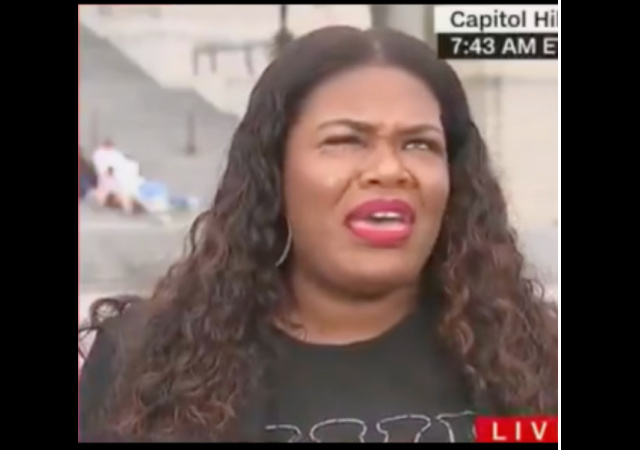 Rep. Cori Bush (D-MO) has come under fire for wanting to defund the police, while keeping her private security.

Bush justified the security because her body is priceless to this planet. (Yes, you can laugh. I laughed…a lot!)

It turns out the woman who hates the police had two St. Louis sheriff deputies on her detail.

They got caught by Sheriff Vernon Betts in person…in St Louis:

Recent federal filings show she’s spent $70,000 in campaign funds since taking office for private security services. Back in April, Bush, St. Louis Mayor Tishaura Jones and other notables took a tour of the city’s jails. News 4 obtained surveillance video from the tours and along with all others, two security guards were there to protect Bush: Tylance Jackson and Maurice Thompson.

Also there that day was St. Louis Sheriff Vernon Betts who told News 4 he was surprised to see the two security guards because they also worked for him. The sheriff told News 4 Jackson and Thompson violated policy by not getting approval to work a secondary shift as security guards. He said the two were warned not to do it again but several weeks later, he said his office was called by the VA police in Jefferson Barracks who said the two men were again providing security for Bush.

Betts also said Jackson and Thomas do not “have current individual private security licenses to work in the city.”

Thomas and Jackson already received warnings in the past for working security for Bush. So it’s not the first time.

Jackson described his firing as unfair even though it sounds like Betts had a valid reason:

When he talked to News 4, Jackson said he believes the sheriff had another motive. “Because of the client we worked for and we didn’t push the agenda of the sheriff on the client.” And when it comes to licenses, he said he didn’t need one. “You do not need a security license to do executive protection because if I hire you to protect me, I am paying you out of pocket. You don’t need a license for that.”

Let’s see what their union does.

Since all union grievance processes are designed to favor the members, they’ll get their jobs back with pay at mediation.

Only if your union rep does his job. He can just as easily leave you twisting in the wind with no cover.

1) “You do not need a security license to do executive protection because if I hire you to protect me, I am paying you out of pocket. You don’t need a license for that.”

Nonsense, This guy is supposed to enforce the laws? He doesn’t understand them.

2) Not yet seen a picture of her with her mouth closed.

You can judge a nation by the people it elects to high office. Just one look at this pig and you get the picture.

her pocket or the campaign’s pocket? I doubt she is spending her own money.

The last sentence of the statement
““You do not need a security license to do executive protection because if I hire you to protect me, I am paying you out of pocket. You don’t need a license for that.”” doesn’t quite fit since Cori Bush isn’t paying for the security out of HER pocket. She’s using money that came through tax-deductible donations. That doesn’t make it HER money. They need to look at the checks they received to verify that their checks were drawn on HER PERSONAL BANK ACCOUNT. Otherwise, they can forget it. In fact, after being warned, were they (like Bush) so arrogant that they thought they were above their Job regulations?

Which makes Bush guilty of illegally diverting campaign funds (ie. tax-deductible donations to her campaign) for her own enrichment and use. Especially if it can be shown those funds actually were transferred to her personal bank account first, and then paid out to the private security firm.

If she’s transferring campaign funds to a personal account, bad. However, she could try to make an argument that if the money is coming directly from her campaign account it’s because she’s using it under the guidelines of it being campaign-related or of a political nature. But even then that’s a slippery slope, because her office staff cannot have any official role in such things. So if anyone in her office helped with the arrangements to visit the jails, for example, that would raise eyebrows.

Crazy Merrick Garland will get right on it.

Since there is no “campaign” that excuse is out and you cannot simply appropriate campaign donations for activities of a “political nature”. No excuses. If Bush is using campaign funds to pay for her private security she is using it for her own enrichment and is violating the law. (And it doesn’t matter if it were paid directly out of the campaign fund account or funneled through her personnel account. It’s still illegal either way.)

I hope to God the checks are on her personal account. She has filed papers saying she spent over $70K of campaign funds on personal security. If that’s true, and she used personal checks, that means she is co-mingling campaign funds with her personal money. Last I checked, that is a felony. Since over 90% of her “campaign funding” came from George Soros’ foundation, the money came from out of state, and that let’s the feds get involved. Bet ya a dollar the deputies were working for her while on the county’s time as well, which is stealing time from the county on the “deputies” part. These 2 maroons think that THEY will still carry guns and wield power if the cock-eyed representative gets her way in defunding the police. But that won’t happen. If something that insane is allowed to occur, it’s each man to himself. The little Nazi’s like Bush and Chicken Legs, aka AOC, believe that THEIR lives must be protected,, but we the people must roll over and play dead. But no cops means no courts, which means if idiots like these 2 try to muscle you, or a blm or antifa group “protests” in your town, you have every right to shoot them down like dogs. We will protect ourselves, and we out-gun them, and are by and large better trained as well.

Um, trust me, campaign donations are not tax-deductible.

Donations or contributions to politicians or their campaigns are not tax deductible.

Getting prior approval from the higher-ups to moonlight as private security is pretty much SOP with every department and organization I’ve ever dealt with. Not doing so would get you disciplined and/or fired on the spot.

Those two guys were lucky to get off with a warning the first time. Deliberately ignoring that warning was foolish and arrogant, much like their protectee.

“Deliberately ignoring that warning was foolish and arrogant…”

Maybe not. What if their primary pay was from somebody else and their assignment was to become a deputy sheriff? What if their role was to obtain inside information about the Sherriff’s Office in particular and law enforcement in general and feed it to Bush? But, then why expose themselves by working security?

This situation does not make sense so there is an agenda in play that we are not yet aware of. Perhaps a clue will be knowing what these deputies do now for income.

And how the hell is that even legal. She’s diverting campaign funds (ie campaign donations) to her private use for a private security force. That’s gotta be illegal. (And yes, I understand the the laws of this country don’t apply to democrats but really, this is just getting ridiculous.)

The NY Times and CNN will get right on it.

Members of Congress are allowed to hire bodyguards with campaign funds, according to a 2021 ruling from the Federal Election Commission. The commission said members of the House and Senate may spend campaign dollars to hire security personnel when they are not being protected by Capitol law enforcement on the Hill.

Funny thing is, if she was having legitimate, documented threats against her the US Capitol Police would provide her with a security detail for as long as deemed necessary.

She’s only been in office since January 3, so she’s essentially shelling out 10 grand a month for this. I wonder if any of it has gone for when she’s in DC but not on Capitol Hill. Your average Congresscritter can walk down any street in the DC metro area and 99% of people wouldn’t recognize them.

But she’s going to be in office as long as she likes unless she’s primaried out. I have a feeling she plans to be, since it’s obvious she enjoys being considered important and the media attention.

No she’s not. It’s not costing her a thing. She’s illegally diverting $10 grand a month from her campaign fund account(s) to pay for her private security people.

She wants to defund the police so they can come and protect her.

Protect and serve me!

I don’t believe anyone who works for this racist demagogue should carry a badge and a gun.

1) Well, she sure defunded those two cops.

2) “You do not need a security license to do executive protection because if I hire you to protect me, I am paying you out of pocket. You don’t need a license for that.” What bullshit. All private security is paid for with private funds. If this were true, nobody would need the license.

3) One of these cops whined that a lot of his colleagues were running unlicensed private security on the side, but only he and his buddy are being fired for it. If you’ve ever complained to a cop that he stopped you rather than one of the faster cars who were passing you, what sympathy did you get from him?

Wow, what a load of complete nonsense.

1. Campaign donations are not tax deductible.

2. Congressmen have permanent campaigns. She is entitled to have a campaign committee and to have it pay for legitimate campaign expenses.

3. There is no question that her security is a legitimate campaign expense. There is nothing even slightly illegal about using campaign funds for it. If she weren’t a candidate or congressman she wouldn’t need/i> bodyguards. She wouldn’t be under threat, because nobody would have heard of her. (Whether she’s legitimately under threat now is doubtful, but if she isn’t then she definitely wouldn’t need guards as a private person.) Therefore it’s not a personal expense and the campaign can pay for it.

4. Whether the checks are coming from her or from the campaign is completely irrelevant, even according to this idiot Jackson. He did not claim the checks were coming from her personal account. His claim, strange as it is, is that so long as his client is paying him directly he has no need for a license. For that purpose it makes no difference whether his client is Bush personally or the Bush campaign.

5. But his entire idea makes no sense. I have no idea whether Missouri law actually requires security guards to have licenses, but I cannot believe that it requires them only if the client is not paying the guards. I mean, who else would be paying them, if not the client? And why would the law care? The most reasonable explanation is that Jackson is simply babbling nonsense, and trying to analyze it as several commenters above do, is a stupid exercise.

Oops. That close italics tag after “need” has a missing <