“It’s a red line. President Biden announced that on 31 August they would withdraw all their military forces. So if they extend it that means they are extending occupation while there is no need for that.” 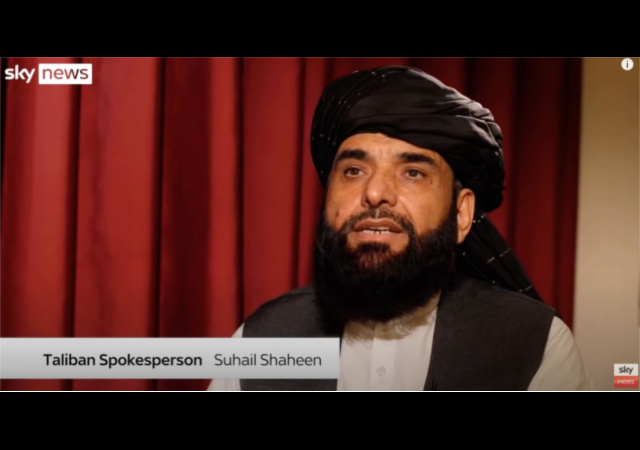 The Taliban has met with Sky News in Doha to discuss what happens next – and issued a stark warning about the withdrawal of troops from the country.

Taliban spokesperson Dr Suhail Shaheen said: “It’s a red line. President Biden announced that on 31 August they would withdraw all their military forces. So if they extend it that means they are extending occupation while there is no need for that.”

He added: “If the US or UK were to seek additional time to continue evacuations – the answer is no. Or there would be consequences.

“It will create mistrust between us. If they are intent on continuing the occupation it will provoke a reaction.”

I wonder if Shaheen said “red line” as a way to mock former President Barack Obama’s response to ISIS in Syria. That red line kept moving.

America is still having difficulty evacuating American citizens, Afghan-Americans, and those who helped our military.

Biden admitted his administration discussed moving the deadline: “There’s discussions going on among us and the military about extending. Our hope is we will not have to extend, but there are going to be discussions, I suspect, on how far along we are in the process​.”

Biden wants to bring it up when he meets with G7 leaders on Tuesday.

Shaheen described reports of the Taliban going door-to-door, hunting those who oppose them or helped America in the past 20 years, as “fake news.”

Yeah..the only part of that interview I believe is the threat towards America. The day the Taliban acknowledges even one human right for women is the day hell freezes over.

Women are slaves under Taliban rule.

Is Dr. Suhail Shaheen a real doctor or is he more like Dr. Jill Biden?

We need to destroy that military weaponry we left behind whatever the consequences. They are using Americans and allies trapped there as hostages already. They won’t let us take them out. It’s a tough call to make but they are probably dead already. Take out that stash Biden left behind.

Afghanistan is basically Kabul and the surrounding area. Blow it off the face of the earth. Then resettle the Afghani refugees there instead of taking them to the US. These people are beyond salvation. All we are importing is their barbaric ancient culture of death.

But . . . but . . . according to Biden the regime will be fully vetting and screening all Afghans before they are allowed to settle in un-suspecting towns and cities across the United States. And we have to believe what the Biden regime says, right? Right?!??

Within the past two weeks, I saw an article about a “trusted” Afghan translator who worked with US forces for years before they discovered he was calling in each day’s patrol plans to the Taliban on a satphone. He was responsible for getting an entire unit ambushed with IEDs. The article was written by one of the soldiers who came back permanently disabled. (I tried finding the article again, but recent Taliban punishment activity against Afghan translators has fouled the search results beyond usability.) My point is that if their “rigorous screening” didn’t properly vet a snake like this when it was their own lives on the line over there, they certainly won’t expend the effort to screen better when it’s our lives on the line over here.

There are also stories about New Afghan Army units taking to the field, pretending to fight the Taliban, then coming back to base requesting more ammunition because they expended it all fighting the Taliban. In fact, they met the Taliban, GAVE them their ammunition, so the Taliban would have more.

It is their duty to lie to the infidel.

“Biden wants to bring it up when he meets with G7 leaders on Tuesday.”

Before or after they pants him and give him a swirly?

I’m intrigued by Taliban talk of “consequences.” Will we will have one of their famous beheadings in our future? Can we choose the politician?

Every beheading should be ground zero for the largest fuel air bomb we have. One should probably be dropped right away, as a warning and show of strength. Terrorists are just another form of bully, and bullies understand only one thing, brute force.

Yup. These SOBs are getting just a tad bit full of themselves. Not surprising, but it could be lethal. But with a “leader” like Biden, they’re just hedging their bets and they will probably be right.

Who goes in his place? Jill? ,-la? Will they bring Herr Doktor Heinrich Kissinger out of mothballs?

Ha ha. It was a virtual summit.

Women will have “the same rights as everyone else” that they have always had under the Taliban, which is to say, no rights at all.

I’m sure the Tolly Bon wants a nice clean victory parade on Sept 11, predicted last fewdays Sept 12 it will be a free for all on getting slaves and prisoners by the Taliban.

Meanwhile, what will go on HERE September 11? I wonder if any of our oh so wonderful intelligence agencies have any clue?

I keep checking my calendar, hoping against hope that 9/11 isn’t on a weekend this year. It is on a Saturday. Every time I check. I’m dreading it (kind of more for what will happen in Afghanistan than here, but not a day I am looking forward to. At all.).

Only Biden could find a way to become the Taliban’s b*tch in record time. Thanks, Joe.

No, he’s still taking his orders from Beijing. They’re salivating over all of those rare earth deposits.

Taliban treating Biden like they treat their women – ordering him around and warning of “consequences” if they don’t comply.

We have given them thousands and thousands of American hostages and hundreds of millions in the most advanced military hardware.

They now hold all the cards.

They know that Biden and his crew of incompetent woke idiots are cowards and have no stomach to fight. They KNOW that they’ll beg them to not do anything and shower them with billions of dollars to not make them look worse.

You’ll notice I didn’t say ‘not kill Americans’, I said ‘not make them look worse’, because it SHOULD be clear to everybody that every level of this incompetent shitshow doesn’t give a single fuck about any American left in Afghanistan.

Which is exactly why they are REFUSING to state exactly how many Americans are still in Afghanistan. They know. They know GODDAMN well. And they ALSO know that if they say that number, people are going to be able to count how many have actually been evacuated, and realize that the Biden clownshow starring Milley and Austin are going to abandon tens of thousands of Americans in Afghanistan and claim that they ‘didn’t know’ that they were still there.

“First of all, I think it’s irresponsible to say Americans are stranded. They are not,” Psaki retorted. “We are committed to bringing Americans who want to come home, home.”

Notice: “Americans who want to come home.” Because, like, you know, some of them might totally want to stay, knowhatimsayin’?

Psaki is clearly a below average PR hack. She should be air dropped in Afghanistan, I am sure that they can find a use for her.

She would be in no danger, since she maintains no Americans are in danger and none are stranded.

That’s going to take a much better sales pitch than the administration is currently making.

“The goal is to use Afghanistan to wash money out of the tax bases of the US and Europe through Afghanistan and back into the hands of a transnational security elite. The goal is an endless war, not a successful war”.
Julian Assange

I never thought I’d be listening to Russell Brand on anything, but he asks probing questions and has some good insight. Surprisingly. intelligent.
“Was it all deliberate?”
https://www.youtube.com/watch?v=7wj5ByIqC_w%5D

Idiot Biden better order the US Military back into Kabul in force and take over the city ASAP or the Taliban will have rounded up Americans and will be executing US citizens under their control on 9-11-21. Go in with all means necessary and destroy all Taliban within and around Kabul. This better be done quickly and exceptionally or the White House will not survive America’s ANGER!
General George Patton’s ghost has cast his shadow over the White House and Cluster Fart Biden!

Mailman: I will say the same thing to you as I did to a fellow I chat with now and then over there in England. I thank your military forces for all they are doing to help get Americans out of Afghanistan, I greatly appreciate it.

Has snarky, obnoxious and insufferable Dhimmi-crat prostitute-propagandist, the noxious Colbert, opined that Xi-den’s mouth is now serving as the “cock holster” for every Muslim terrorist in the world?

The taliban are in a pretty strong position. They have a lot of weapons, not only weapons that we left behind but weapons abandoned by the Afghan army and air force.

Now the taliban has all that stuff.

The taliban will probably be a primary arms supplier for terrorists and insurgents for the next 100 years.

It keeps the pattern going. The arms industry is grateful.

Taking orders from the Taliban? This is what it has come to?

The present US regime has decided to surrender to the Taliban, and to do it in the most humiliating manner possible to destroy the reputation of the country. They’ve intentionally left behind enough arms, ammunition, equipment, vehicles, supplies, etc. to make the Taliban the best equipped fighting force in the region — and they’re likely to leave thousands of Americans as well. All this has to be intentional — every bit of it could have been avoided if the people in command wanted to avoid it. As stupid as many of them are, they aren’t that stupid.

Well, it appears Biden was deciding whether to surrender America to Mexico or to the Taliban.

The answer was obvious all along. He chose the one that would cause the USA the most shame.