Taliban Wants to Bring Back Leaders, Including One Swapped for Bowe Bergdahl

Taliban Wants to Bring Back Leaders, Including One Swapped for Bowe Bergdahl

Did Obama, Trump, and Biden not think any of the released prisoners would not return to Afghanistan when given the chance? 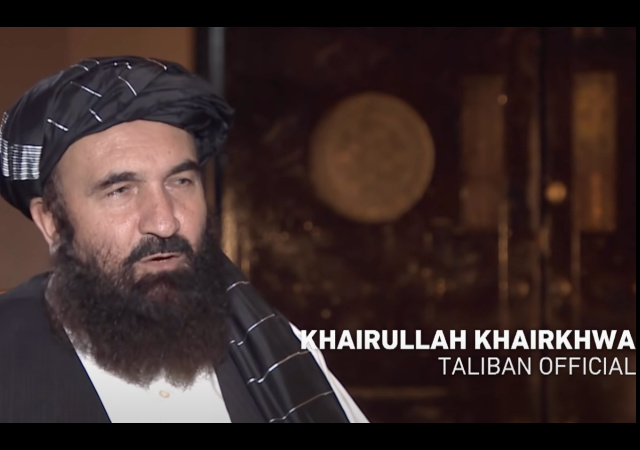 Obama promised the men would settle in Qatar and not become a problem.

But as soon as they got out, the Taliban leaders promised to fight Americans in Afghanistan. They set up channels for the Taliban in the country and helped from afar.

Fast forward to August 15, 2021. The Taliban took over Afghanistan. They toppled Kabul. They are in charge.

Now the Taliban want to bring back their old leaders from Qatar. This includes Khairkhwa.

You know how everyone is pointing to former President Donald Trump’s Taliban meeting? Well, President Joe Biden’s Afghanistan envoy met with him and others in Moscow:

Earlier this year, one of them, Khairullah Khairkhwa, actually sat across the table from President Biden’s envoy to Afghanistan, Zalmay Khalilzad, in Moscow, where Khairkhwa was part of the official Taliban delegation that negotiated the final terms of the US withdrawal. The retreat cleared a path for the Taliban to retake power after 20 years.

“I started jihad to remove foreign forces from my country and establish an Islamic government, and jihad will continue until we reach that goal through a political agreement,” Khairkhwa said at the summit.

After raiding the presidential palace in Kabul, a group of armed Taliban fighters told Al Jazeera that they were arranging to bring back their Gitmo-paroled leadership from Qatar upon securing the capital. One unidentified fighter, who blasted America for “oppressing our people for 20 years,” claimed he had also been locked up at the Guantanamo Bay facility. It’s more evidence that Gitmo catch-and-release policies facilitated the fall of Afghanistan to the enemy that Washington vowed to crush after 9/11.

Khairkhwa made all sorts of promises to Biden’s envoy in Moscow. The envoy ate it up:

Earlier this year, Khairkhwa assured the administration that the Taliban would not launch a spring military offensive if Biden committed to removing all remaining American troops. He also promised not to retaliate against any Afghans who worked with the US military or the US-backed government in Kabul. But Khairkhwa showed no signs of remorse or rehabilitation inside Gitmo — if anything, he’s probably more embittered toward the United States. Why would they believe him?

Reports coming out of Kandahar and Kabul indicate the extremists have already broken their word. Taliban thugs have started a reign of terror against people who cooperated with Westerners. Guided by a “kill list,” they are going door to door to punish their enemies.

Mullah Abdul Ghani Baradar, a Taliban co-founder and deputy leader, will also go back to Afghanistan. He is in charge of the terrorist group’s political bureau.

Baradar signed the treaty with Trump in Qatar in March 2020.

The taliban is already giving orders to Joe Xiden.
They told him that they want all US troops out of Afghanistan before 9/11.

Sucks having a senile lap dog in the White House.

I did not realize until yesterday that Obama also gave them $5 Billion for Bergdahl. Obama basically funded the entire Taliban apparatus.

Maybe they could make a swap for Bowe Bergdahl. I’m sure he’d love to go back and see his Taliban friends.

Maybe Bergdahl can re-open his bomb-making seminars for his jihadi buddies.

Remember how Obama’s stooge Susan Rice went on all the political talk shows and insisted that Bergdahl had “served with honor and distinction”? Oddly enough, the Army didn’t put that on Bergdahl’s dishonorable discharge papers.

Bergdahl the “hero,” whose parents were honored by Obama in the Rose Garden in front of lots of t.v. cameras, was court-martialed for desertion and misconduct before the enemy, he pled guilty, and he was busted down in rank, fined, and given a dishonorable discharge.

But other than being a liar, a deserter, causing six of his unit members to get killed while out searching for him, and holding bomb-making seminars for his jihadi buddies so they could kill even more Americans, Bergdahl was a swell guy, right Obama? He was almost as wonderful as those Taliban generals that Obama swapped Bergdahl for, the same generals now leading the coup in Afghanistan.

Helluva job, Obama! You and Bergdahl should be sharing a cell in a federal prison, you traitorous pieces of garbage.

Of course Obama’s five jihadist a will return to Afghanistan. That was the plan.

Sadly, the Taliban show more patriotism toward their ruined country then 99% of Americans do toward the USA.

In Afghanistan, they behead those who hate their country. Here , we give them medals and book deals.

Will John Walker Lindh go back when his probation is over next year?

“Marc Thiessen provides a shocker in his Washington Post column: the day after America’s embassy in Cairo was assaulted and the consulate in Benghazi, Libya fell victim to an armed attack that killed four, including Ambassador Christopher Stevens, the president once again skipped his intelligence briefing, choosing instead to fly off to Las Vegas to fundraise while the world continued to burn.”

It didn’t come as a shock to those of us in the intel community. One of the most tired memes you’ll hear from decision makers is, “It was an intel failure.” No, it wasn’t. Remember the battle of Midway? Admiral Nimitz said intel was worth the equivalent of a fourth carrier battle group.

ADM Nimitz’s intel officer was a gent named Edwin Leyton. Nimitz told him he was to be his Yamamoto. He’d ask him what Yamamoto was thinking, and when he asked him that just before Midway Leyton went to the chart at the head of the staff room table and traced the exact route the Kido Butai was going to take to attack.

He was only off by 5 minutes and 5 degrees. And like Republicans, the Pacific Fleet pounced.

We haven’t gotten worse at our jobs since WWii. But when we’re not telling people what they want to hear they don’t listen to us. I was doing counternarcotics (it’s on my DD214 so I’m not giving away any secrets) in Panama, working for a USAF general convinced we were dealing with Juan Valdez walking his donkey over mountain passes but instead of coffee beans the burro was hauling coca in the paniers.

I showed him ads for some pretty sophisticated electronic devices you could buy off the shelf in Miami. And the cartels had the money to buy them. I still couldn’t convince the general we weren’t dealing with a bunch of stupid, unsophisticated peasants.

Your drug war in a nutshell.

Yes, I’ve worked for some stupid people who would turn around and blame me for their stupid decisions. And I’d shut up. Our motto in naval intelligence was, if we couldn’t take the blame they wouldn’t keep us around.

But Obama and Biden have sunk to a new low. Obama wouldn’t listen to his intel briefers, he just wanted to read the PDB. He put Tommy Vietor and Ben Rhodes on his national security team. His campaign van driver and a failed fiction novelist. Who the eff does that? When asked about why Obama didn’t want to sit through intel briefings, Tommy Vietor claimed Obama was such a “sophisticated consumer of intelligence” He didn’t need briefings; he could just read it.

I’ve briefed sophisticated consumers of intel. They scared the hell out of me because I couldn’t always divine a commander’s priority intelligence requirements. I wasn’t supposed to.

I needed the feedback to do my job. Sophisticated consumers of intel will ask probing, often brutal questions.

Pace Tommy Vietor, but he’s actually making the case Obama was such a dumb f*** he couldn’t think of a single intelligent question.

And now Biden was saying that what any drunken squirrel monkey could see would happen, wasn’t going to happen. He can’t even come up with a halfway decent lie. So, why is he the president and I’m not?

For your viewing pleasure.

Now I’m having flashbacks to growing up in a Naval Regional Medical Center during the Vietham era. The passageways lined with horribly maimed and burned Marines and Sailors. And nothing has changed.

Well, yes. At least I have (I don’t throw her name around). Remember this guy?

I try to leave as few traces of my presence as possible while still leading a normal life. Because while Levinson was being held in Evin prison Obama was telling the world that Iran was a normal, responsible nation in the community of nations. Bo Bergdahl we move heaven and earth to get back. Susan Rice said he had served honorably. I have no doubts that the only way they think anyone can serve honorably in the United States armed is to go UA.

So I figure the Iranians and the NORKs might think I’m a bargaining chip. A worthwhile hostage. And, now Biden. Who like Obama regularly proves dumb f*** and evil and anti-American aren’t necessarily in conflict.

Just saying; it does happen.

A terrorist lied to us? I can’t believe it.

At least we know the rebels are on Dantooine.

Now that biden* and his underlings have shown their tails, the world has become a far more dangerous place. No one at any level of leadership has any respect for biden* nor the American people who fell for his bullschiff.

Will they ever learn that executed terrorists do not cause further trouble?