Defense Dept. confirms Biden won’t budge on the deadline despite pleas from allies. 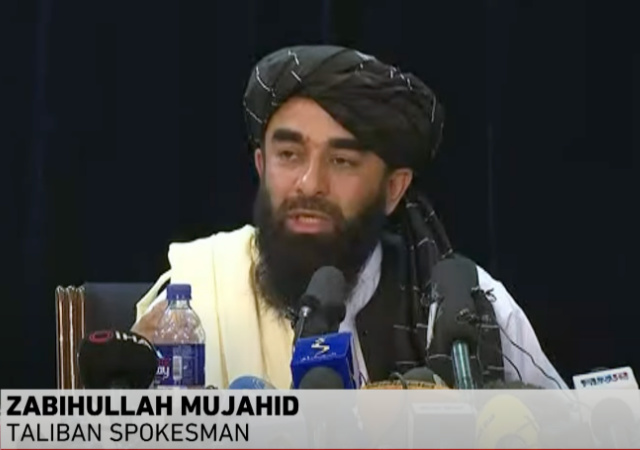 Taliban spokesman Zabihullah Mujahid stated the U.S. must leave Afghanistan by August 31. The terrorist group will not give an extension.

Mujahid said, “life is returning to normal in the country but chaos at the airport remains a problem.”

Mujahid also said he did not know anything about the meeting between CIA Director William Burns and Taliban leader Mullah Abdul Ghani Baradar.

We still do not know what Burns and Baradar talked about but can assume it was about extending the deadline.

Defense Dept. Press Secretary John Kirby says there has been “no change” to the Biden administration’s timeline of getting all American forces out of Afghanistan by Aug. 31.

“We continue to make progress every day in getting Americans – as well as Special Immigrant Visa applicants and vulnerable Afghans — out,” he added. “We remain committed to getting any and all Americans that want to leave, to get them out,” Kirby continued.

“We still believe – certainly now that we have been able to increase the capacity and the flow — we believe that we have the ability to get that done by the end of the month.”

I rather think Biden is playing tic-tac-toe.

And I rather think Biden is playing with his pudding.

Biden is playing with himself.

For guy who goes by Quid Pro Joe, he really isn’t any good at it.
He just gave the enemy 600,000 brand new advanced weapons.
You’d think he could get them to cut him a little slack.
Clearly the art of the deal is not his forte.

Biden plays to lose.
>> Remember, Winning is too white.

Maybe he is getting 10% of the opium trade?

Taliban treating Biden the way they treat the other women – ordering them around and warning them of “consequences” if they do not obey.

biden is painting the walls with his own shit.

Maybe he’ll give us a checkers speech!

Why didn’t anyone tell the Taliban “America is back”?

Taliban are content to wait ’cause they know Biden won’t be there much longer.

There they are again, those words “getting any and all Americans that want to leave” — They are setting the scenario to cover their behinds by saying that if anyone didn’t get out it’s because they didn’t want to! Sickening. Now we definitely know beyond a doubt who is wearing the pants in Afghanistan.

They are masters of propaganda.
It helps when you have 90% of the news media advising and coaching you.

When Biden said “Build Back Better” he was talking about the Taliban.

This has shades of 1979 all over again, only worse. Then, like now, instilled my deep seated dislike of Democrats.

“We believe that we have the ability to get that done by the end of the month”.

Pardon me, but isn’t this the same outfit that said the Taliban taking over Afghanistan was “highly unlikely”? And in the “highly” unlikely event it did happen, it would take “months”?

Sorry, my Trust Meter is deep into negative territory here.

Such a strong backbone and leader we have…. ugh

From Obama to Biden, a legacy of shit shows.

“You’re on your own. So sorry. Blame Trump.”

It’s gotten so old that they now have to beg people to blame Trump. There may still be a few dimwits who have not caught on to the “blame Trump” excuse.

Lots of pathetic losers among Progressives who are happy to play the part of “useful idiot”. They are so dumb – they focus on the word “useful” and think its a compliment.

I am beyond humiliated.
The conversation should have been: “we will leave when we have EVERYONE out. Period. If you want us out , you facilitate that. No “checkpoints”. Here is a list of the military equipment we want returned. You can make it easier, we are out sooner. But we ARE getting our people out. The easy way or the hard way. We have a bunch of pxssd off Marines. Don’t push it.”

That’s why they plan to keep a good supply of American hostages.

I told you they were going to abandon Americans.

The tell was when they continuously REFUSED to even estimate how many Americans were left in Kabul. The trial balloon lie they’ve been floating is they’ll get out everybody that ‘wants to leave’.

They knew weeks ago they were going to hang Americans out to dry.

These incompetent woke cowards are a fucking disgrace.

They’re spending most of their time trying to figure out how to blame this all on Trump.

“We’ll get everybody out who wants to leave.”

I suppose thousands will decide to stay.

my bad, register with the state department in Kabul

Well the focus needed to be importing 3rd worlders for more Democrat voters dontcha know. Hmmm…I wonder if the virulent hate the Afghanis feel toward Biden will spill over to the Democrat party …would love for that to backfire on them. Unfortunately the 65-100,000 Afghanis being imported…93% want to live under sharia law so it will certainly negatively impact the communities they are dumped in.

The rest of NATO, especially the Brits, French and Germans need to stand up and say we aren’t leaving until we have everyone out, no matter what day it is. They certainly have enough people and equipment to address the Talliban on their own without any US help, or is it all bluster trying to cover up for their paper tiger aka their own military.
Those countries all have plenty of people and aircraft, drones to get the job done. They have to be willing to fight for the safety of their own people.

To be blunt I’m not actually confident that NATO is CAPABLE of standing up to the Taliban without us. Except for the UK their militaries are small and rather poorly equipped and most of them were created with the idea that they would be supporting the US while we fought the main fight. With the possible exception of Britain, they are NOT prepared for an actual fight with the Taliban that doesn’t include the US.

They are not capable of standing up to the Taliban without us.

Seems like only a few days ago Comrade Biden’s admin was telling Americans not to try to get to the airport. Too dangerous. Just go to the internet and fill out some forms while you wait for further instructions.

Now they are told they have to get there by Aug 31. Preferably sooner. ASAP, in fact. With no help from the Comrade Biden’s admin. And it’s no less dangerous. Probably more dangerous.

But no mean tweets.

The Taliban better shape up or they will have to deal with President Harris.

She could open her mouth and swallow half of the taliban in one smooth move.

I hope she doesn’t blow it. That never gets old.

When will the snarky, obnoxious and insufferable dolt, Stephen Colbert, concede the fact that Xi-den’s mouth is now transparently serving as a “phallus-holster” for all Muslim terrorists around the world?

“I wanted to give you a current update on the situation in Afghanistan, I made some critical errors. I underestimated the strength of the Taliban & I overestimated the strength and capability of the Afghan forces. This was my fault. Do to my mistake, the Taliban has taken control of Afghanistan. ISIS & Al Qaeda are working with them. There are thousands of Americans being held hostage. This is my fault. They will not be stranded for long. Within 48 hours American troops will overtake all major airports in Afghanistan. Any resistance will be completely destroyed and without mercy. We will not stop until we have all American citizens evacuated. Any person that interferes will be killed. We will also recover or destroy all of our military equipment that American taxpayers have purchased. Any person interfering, using, guarding or located in close proximity to our equipment will be killed. We will depart Afghanistan when we have every single last American, and all of our equipment safely evacuated. The United States will continue to monitor Afghanistan. Terrorists, training camps and their activities will be targeted and destroyed. Human rights violations against women and children will not be tolerated.” This is paraphrased from Jocko Willink Instacrap account…I can’t help but think that if Trump were in charge, none of this would be happening. The unbelievable reality that Americans will be left in Afghanistan is beyond reprehensible. They keep using the phrase “for those that want to leave”…this is clearly the excuse the Biden Admin is using for leaving US citizens behind. So shameful.