“You can’t f— up as bad as he did and say you’re sorry. This did not need to happen, and every life is on his hands.” 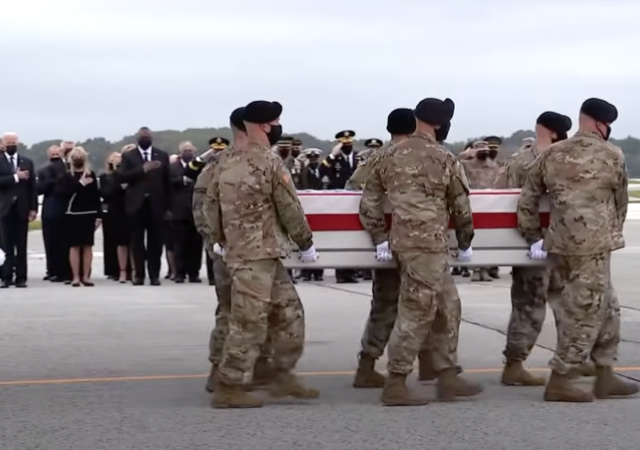 Someone, please tell President Joe Biden that his son dying of cancer is not the same same as someone’s child, spouse, parent, sibling, etc., who died in uniform.

Biden met with some of the families of the 13 service members who died in the terrorist attack at the Kabul airport.

The Washington Post wrote about the “dignified transfer,” which is the return of fallen service members to the states.

WaPo fluffed up Biden before detailing a few of the meetings. It reminded us of the tragedies Biden has faced: the death of his wife and daughter in 1972 and his son Beau Biden’s death of brain cancer.

In other words, tug at the heartstrings for the president before you print the words of those who lost loved ones in Afghanistan last week.

I guess WaPo had to do it because a few of the families did not have kind words toward Biden.

It did not go well for Marine Corps Lance Cpl. Rylee McCollum’s family:

One of McCollum’s sisters, Roice, said she and her sister and her father joined McCollum’s wife, Jiennah McCollum, on the trip. But when it came time to meet with the president, they left the room, because she said they did not want to speak with the man they held responsible for McCollum’s death.

Only Jiennah, who is expecting the couple’s child next month, stayed. But she left disappointed, Roice said. The president brought up his son, Beau, according to her account, describing his son’s military service and subsequent death from cancer. It struck the family as scripted and shallow, a conversation that lasted only a couple of minutes in “total disregard to the loss of our Marine,” Roice said.

“You can’t f— up as bad as he did and say you’re sorry,” Roice said of the president. “This did not need to happen, and every life is on his hands.”

At home in Clearwater, Fla., Paula Knauss stared at the service taking place about ​​1,022 miles away and said that watching it from the television “opened a floodgate” of different emotions about her son, Ryan Knauss.

There was heartbreak over losing him. There was pride for “a hero who saved the lives of over 2,000 Afghans.” But there was also disappointment over what Knauss deemed a lack of leadership and protection for the service members in Afghanistan.

“You can’t have a hasty withdrawal after 20 years of war,” she said. “Because it’s beyond me. It disgraces the name of all those who have fought in the past and who are now on ground, foreign ground fighting right now, my son’s [82nd] Airborne is still there, and they deserve to be protected.”

Knauss said her son’s wife, Alena, and her mother had attended the transfer in Delaware.

Sociologist Erving Goffman somewhere has an essay on a dead person’s participation in society does not end with his death. His body still has a role to play.

Which is to say, indirectly, it’s always scripted.

Something about how showing respect for the dead is a compliance test, I suppose.

The complaint was with BIDEN’S scripted comments to The families, in the way he talked more about his son’s death from cancer than the deaths of their sons and daughters from a terrorist attack.

The returning home ceremony is to honor and pay respects to the departed. A ritual might seem scripted to an observer but it is highly individual to the needs of loved ones left behind..
Each step they choose to engage in practices helps them to honor relationship to the deceased. At the very least when a President chooses to be a part of the process of honoring the fallen they should engage enough to speak to the families with words that center them in whatever way he offers comfort.

You poor guy. You must be very, very bitter about your life.

Free yourself from it: get professional help.

The big guy is only good at grifting and “plausible deniability”.

BIDEN should serve out the rest of his term in prison along with and HUNTER – the “smartest man” Biden says he knows. They can keep each other company.

He and his handlers are lower than s**t. There is nothing redeemable in any of them.

For better or worse, one of my character traits.

I don’t think he cares – his arrogance is that great. Same as Hillary Clinton, Pelsoi, Kerry, McConnell, Graham – they suffer not consequences.

This has to change.

Joe Biden is a stupid, arrogant, incompetent imbecile. The cancer death of his 54-year old son Beau is irrelevant to the suffering of these military families, whose healthy young sons and daughters lost their lives as a direct result of Joe Biden’s colossal arrogance and stupidity. Americans don’t want to hear any more of Joe Biden’s self-indulgent moaning about Beau Biden, or the death of Joe Biden’s first wife a half century ago. Biden spent decades milking his first wife’s death for political points, even repeatedly falsely claiming that she had been killed by a drunk driver. In fact, the first Mrs. Biden’s death was not caused by any drunk, but was caused by Mrs. Biden herself when she suddenly and inexplicably pulled her car out in front of an 18-wheeler, whose driver tried desperately to avoid her vehicle, and rushed to her car after the collision and provided first aid to her and the kids. But Joe Biden cares nothing about facts or truth. Joe Biden is a sleazy, lying, scumbag who cynically and callously exploits the deaths of his family members to try and distract the public’s attention from his own long history of corruption and incompetence. And Americans are sick of it.

“It struck the family as scripted and shallow”

Meeting Biden in person must be every bit as unsatisfying and unproductive as “meeting” Lincoln in Disney World’s Hall of Presidents.

Normally I would not post a link to images.. but.. I had the same exact thought.. a while ago.
https://i.postimg.cc/W3BBYv6m/biden-animatronics.jpg

Autofellatio, on the other hand…

I’d rather meet Lincoln at Disneyland.

“Scripted and shallow” is a fitting term for the entire Biden Residency.

Info was leaked today that showed that AUSTIN and MILLEY knew that the ISIS attach was coming that day AND even knew the approximate time and location. — So why are these soldiers DEAD ? ? Why were they in harms way?

People have to RESIGN, be FIRED, and/or COURTS-MARTIALED over this. Profound and utter negligence – amounts to manslaughter perhaps murder because they knew, or should have known, the deadly risk these soldiers faced.

I thought BIDEN would survive this tempest – but with this new information – I think he will be impeached or 25A’d.

Austin and Milley have spent the last year doing nothing but drumming out any conservatives from the military, illegally engaging in domestic politics by attacking Trump and his supporters and stating that their main goal was to eliminate white supremacists (defined as anyone–whether black or white– who dares to criticize the Biden regime.)

They have spent no time or effort is leading the military forces or giving them the support or leadership they deserve. They must be forced to resign, at the very least.

Anything less than an outright admission of guilt and apology for failing to support the troops is more than insincere; it’s a cynical lie trying to dodge the respnsibility for having made a colossal mistake.

“…failing to support the troops is more than insincere; it’s a cynical lie…”

Yes, and I think that’s what the Marine’s family meant by scripted. There were no warm feelings, no empathy, no sense of sorrow, nor regret, totally out of touch and a lack of concern. And to top it off Joe Biden brought up his son Beau again.

Whenever he mentions Beau, it’s apparent the wrong Biden died.

The idiot couldn’t take his sunglasses off?

Those were to hide one of two things: he was asleep, or had that vacant stare one sees on inmates of “retirement homes” when parked in front of a blaring television set in the activity room.

He thinks they look cool.

He’s done more damage to the ‘avaiator’ sunglass fashion than Michelle Obama did for wide belts on fat women.

They’re hiding his dilated pupils from the drugs.

Seriously, look at video of him in some of his speeches and look at his eyes. He’s drugged out of his mind.

Damnatio memoriae is a modern Latin phrase meaning “condemnation of memory”, indicating that a person is to be excluded from official accounts. If Biden gets lucky, American history will be rewritten to exclude him, because his legacy (which now includes Taliban flying executed men from helicopters) will be truly dreadful and vile….no matter how much fluff our press puts in the account now.

Possibly Leslie,, but history is different now.. We have the internet, and things are not so easily hidden.

Depends on who is writing the ‘history’.

The fucking morons that write Biden’s speeches for him keep having him try to trot out Beau Biden in a pathetic attempt for empathy.

Beau was a fucking JAG that died of cancer and never saw 1 minute of combat. The idea that bringing him up to a family that lost somebody in a freaking bomb blast is going to make him seem ‘relatable’ is one of the stupidest things I’ve ever heard in my life, and yet THEY KEEP DOING IT.

When Biden brings up Beau, look at your watch.

Is Biden going to the hospital to visit the wounded? They must be missing arms and legs and some are on life support. It was reported there were over 200 wounded but they wouldn’t say how many of those were US service members. How many were wounded? What are their names? What are their conditions? Did anyone meet with their families? We are probably talking some huge numbers here.

What would be the point? What could he offer them? He is less functional than they are.

Well, the point of course, is that Biden doesn’t care about the troops. But Trump would have visited. He loved the troops and troops loved him. He is a sincere person whereas Biden is a phony.

Remember when he asked a guy in a wheelchair to stand up and take a bow?

He was probably plagiarizing some evangelist in a carnival tent revival.
But as usual he screwed up and didn’t call out the correct plant in the audience.

I am under the impression the Biden admin doesn’t really care that much about the bad press they are getting.

They care only enough to go thru the motions and sit through some awkward interviews.

They assume this will eventually blow over and they only care enough to do enough to have talking points to use in response to any criticism.

Just give us some vague generalities. Or do like democrats do and redact it.

Don’t worry. He’ll resign soon enough. That was part of the plan from the moment they convinced him to run. Here’s how it will play out:

Vile and ugly Muslim supremacists and terrorist supporters/whitewashers/rationalizers, ingrates Rashida Tlaib and Ilhan Omar, and their ilk, are ceaselessly complaining about the amount of military aid that the U.S. gives to our close ally, Israel, every year. One wonders if these idiots will shut their terrorism-supporting mouths, now that Xi-den and the Dhimmi-crats have gifted al-Qaeda, the Taliban and the global Muslim terrorist movement with close to $100 billion worth of American-made and U.S. taxpayer-funded weaponry — around twenty-fold what the U.S. gives to Israel.