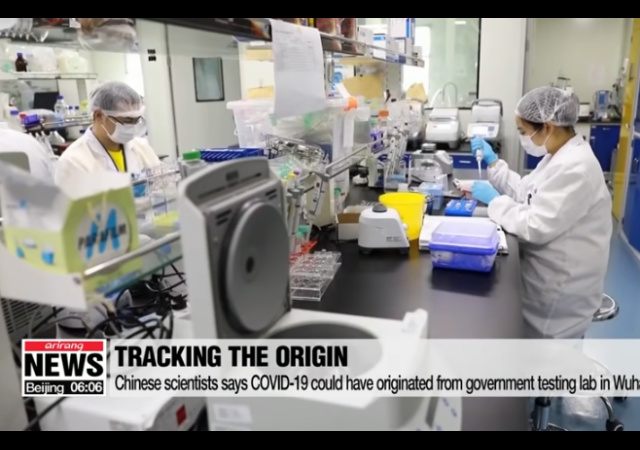 We are a few short weeks away from the Biden-requested report on the origins of the coronavirus that is the pathogen at the center of today’s continuing pandemic.

But the Republican members of the House Foreign Affairs Committee have already released their findings, and they are quite damning for the Wuhan Institute of Virology (WIV). The committee members assert that the coronavirus first leaked from the facility in September 2019, shortly after the Chinese research facility tried to improve air safety and waste treatment systems.

The report also cited ‘ample evidence’ that scientists from the Wuhan Institute of Virology – aided by U.S. experts and Chinese and U.S. government funds – were working to modify coronaviruses to infect humans and such manipulation could be hidden.

Its authors cited a stream of open source information, including satellite imagery showing a surge in visitors to local hospitals, long before cases were reported emerging from a nearby market.

And it reports how scientific papers written by researchers prove the WIV was doing dangerous genetic modification research – so-called ‘gain of function’ experiments – in unsafe laboratories.

‘As we continue to investigate the origins of the COVID-19 pandemic, I believe it’s time to completely dismiss the wet market as the source of the outbreak,’ said Rep. Mike McCaul, the top Republican on the House Foreign Affairs Committee, as he released the report by the panel’s GOP staff.

‘Instead, as this report lays out, a preponderance of the evidence proves that all roads lead to the WIV.

‘We know gain-of-function research was happening at the WIV and we know it was being done in unsafe conditions.’

The Republicans then assessed that once the extent of the contamination became known the the Chinese officials, their efforts were focused on covering-up the incident and blaming the wet market.

“When they realized what happened, Chinese Communist Party officials and scientists at the WIV began frantically covering up the leak, including taking their virus database offline in the middle of the night and requesting more than $1 million for additional security,” McCaul said.

“But their coverup was too late – the virus was already spreading throughout the megacity of Wuhan,” he said of the pandemic that as of Monday has killed at least 4,225,602 people globally.

The investigation also revealed a previously unknown request in July 2019 for a $1.5 million overhaul of a hazardous waste treatment system for the facility, even though it was less than two years old.

It included requests for maintenance on “environmental air disinfection system” and “hazardous waste treatment system” – which would indicate concerns about how these systems meant to prevent lab leaks were functioning, the report alleges.

The fact that the Republicans managed to obtain so much information and evidence that supports their findings is most impressive, especially in light of the fact that the Chinese have created an information blockade around Wuhan. The report is linked here, for those of you who want to review the material further.

McCaul also issued an addendum to the original report, which highlighted both the gain-of-function research that was occurring at the facility. The analysis also hit upon a point I have made: The research with the bioengineered viruses were being conducted at a biosafety level well below internationally acceptable standards for biological work.

There were significant concerns about the lax safety protocols in PRC labs, including from the head of the Chinese Center for Disease Control and Prevention and the head of the WIV’s BSL-4 lab.

…Scientists at the WIV were conducting gain-of-function research at BSL-2 and BSL-3 safety levels. A BSL-2 lab has the same safety protocols as a dentist’s office.

It will be interesting to compare this report with the upcoming document that is being prepared for Biden.

Yeah, Milquetoast McCarthy will get right on it.

Except for a handful, they’re useless. At worst, they’re backstabbing McConnell types.

Fauci knew so much, but was so tight lipped. He will go from saint to sinner when the books are written.

He will “commit suicide” when is usefulness ends.

Fauci makes the three stooges look like the three geniuses.

This report is designed to keep the Biden report honest.

Good luck with that. You know that pedophile is lying because his mouth is moving.

It will get zero media attention.

BS… they purposely leaked the virus

They certainly purposely spread it. Most likely to smear the origin. They certainly had nothing to fear from western investigative journalists.

Does anyone remember who was assigned to run the lab before the outbreak? It seems like that was very damning?

Not to change the subject, but what does this say about the triangle between mainland China, Taiwan and the US? The report recommends adding Taiwan as an observer member of the WHO to address the fact that Taiwan was raising serious concerns about WIV long before the pandemic became widely known. China’s serious misconduct should lead us into a stronger relationship with Taiwan. Taiwan is metaphorically our canary in the China coal mine.

“It will be interesting to compare this report with the upcoming document that is being prepared for Biden.”

Indeed. I think the GOP report coming out now is meant to push the intel report to not whitewash its findings. Despite being based on open source material, you are correct that it is a rather impressive assembly of information. I lightly read the addendum/report, and I have to say I will be upset if our intel agencies try a whitewash after reading this.

CV-19 is just relabeled flu (CV-19 has never been isolated, has it?). The flu suddenly vanished –where did it go?Didn’t 30K-40K die each year “from the flu?” The relabeling was to get people to get the shots. This report is just part of the coverup. Do you really think the eGOP would do real patriotic work and expose the truth about something? Any believer of this will learn in the future that it is just like anything else with eGOP fingerprints.

The virus being a naturally occurring organism, masks working, 6 weeks to flatten the curve, Trump was a Russian stooge, Hunter Biden’s laptop was a Russian misinformation effort, and so many, many more claims/stories, were pushed by the Left were later found to be untrue in the extreme and we are to allow the Democrats, in partnership with Facebook, Twitter, and other social media giants, to censor the country by determining what is true or not? I don’t think so.

Hillary Clinton, when asked if she thought there was a leak from Wuhan lab, replied, “You mean like through a hole or something?”