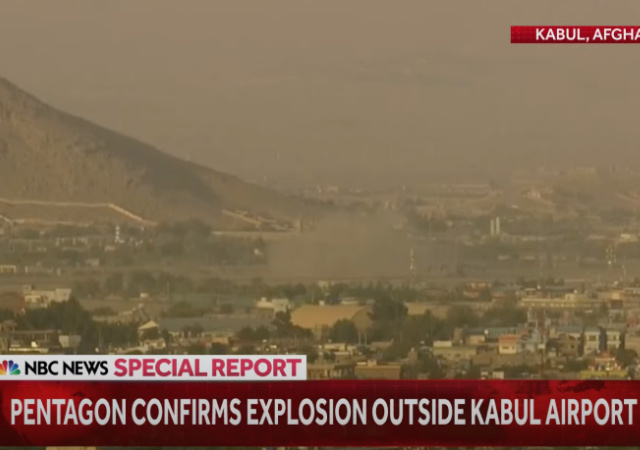 Politico reported classified notes from a meeting shows the Defense Department made preparations for a “mass casualty event” at the Kabul airport only hours before the terrorist attack.

The classified notes contained information from three different phone calls and interviews with two people “with direct knowledge of the calls.”

Politico wrote that the notes make “it clear that top officials were raising alarm bells and preparing for a potential attack that they had narrowed down to a handful of possible targets and a 24-48 hour time frame — projections that ended up being deadly accurate.”

Defense Secretary Lloyd Austin told his team last Wednesday they need to focus on evacuating Americans from Kabul because “the threats would increase in the next 24-48 hours”:

Speaking from a secure video conference room on the third floor of the Pentagon at 8 a.m. Wednesday — or 4:30 p.m. in Kabul — Defense Secretary Lloyd Austin instructed more than a dozen of the department’s top leaders around the world to make preparations for an imminent “mass casualty event,” according to classified detailed notes of the gathering shared with POLITICO.

During the meeting, Gen. Mark Milley, the chair of the Joint Chiefs of Staff, warned of “significant” intelligence indicating that the Islamic State’s Afghanistan affiliate, ISIS-K, was planning a “complex attack,” the notes quoted him as saying.

Commanders calling in from Kabul relayed that the Abbey Gate, where American citizens had been told to gather in order to gain entrance to the airport, was “highest risk,” and detailed their plans to protect the airport.

“I don’t believe people get the incredible amount of risk on the ground,” Austin said, according to the classified notes.

Rear Adm. Peter Vasely and Maj. Gen. Christopher Donahue called into the meeting from the Kabul airport. They provided the officials with details of “threats to three airport gates.”

The discussion escalated to a venting session about the Taliban, which promised to help with security:

But the military leaders on the call expressed frustration with the Taliban’s persistent lack of cooperation, noting that militants were turning potential evacuees away at the gates.

Since the American military team in Kabul last engaged directly with Abdul Ghani Baradar, the leader of the Taliban, “it takes more bandwidth to get things moving,” Vasely and Donahue said, according to the written notes of the call.

“If a person wants to leave but they get turned away by [the Taliban] at [the Ministry of Interior meetup] location, we have instructed them to call us 24/7,” they said, according to the notes of the meeting.

The team had “frequent and constant communications with the Taliban” multiple times a day to try to resolve issues as they cropped up, the defense official told POLITICO. “Many times they were successful, but that doesn’t mean that in subsequent hours or days we wouldn’t have a similar problem pop up again.”

Austin told the men they have to listen when someone like Vasely, a former SEAL commander, warns about an attack.

According to the classified call notes, McKenzie made clear the Americans did not have much of a choice in relying on the Taliban for securing the evacuees. And he predicted the militants would be less willing to help the U.S. military effort the longer they stayed in Kabul, even as the threat from ISIS-K increased. The Taliban and ISIS-K are sworn enemies and defense officials have repeatedly said they have no reason to believe the two groups are collaborating.

“The ability of [the Taliban] to protect us and assist in pursuing [American citizens] and other groups — that willingness will decay, and we’re seeing leading edge indicators of that today,” McKenzie said on the Wednesday morning call. “We do need the agreement of the [Taliban] to pursue our principal objectives of getting out [American citizens] and other priority groups.”

McKenzie then offered a grave prediction about the success of the evacuation effort.

“We’re not going to get everyone out. We’ll get 90-95 percent,” McKenzie said. The call notes did not specify if he was talking about American citizens, or everyone who wanted to evacuate.

“History will judge us by those final images,” Kahl warned, according to the call notes.

On a separate call at 4 that afternoon, or 12:30 a.m. on Thursday in Kabul, the commanders detailed a plan to close Abbey Gate by Thursday afternoon Kabul time. But the Americans decided to keep the gate open longer than they wanted in order to allow their British allies, who had accelerated their withdrawal timeline, to continue evacuating their personnel, based at the nearby Baron Hotel.

Unfortunately, no one closed the Abbey gate on time because the U.K. moved out their people faster from the Baron Hotel. The U.S. kept “the gate open to allow the U.K. evacuees into the airport.”

Vasely also told the Pentagon the Taliban caused problems for a convoy with NATO allies.

Another official kept telling the Pentagon “that they were continuing to see indications of ISIS-K planning a major attack, and noted his team was in the midst of ‘developing targets,’ he said, referring to ISIS-K.”

The bomb exploded on Thursday at 6 PM Kabul time as Austin and Milley told President Joe Biden about the three phone calls.

“This story is based on the unlawful disclosure of classified information and internal deliberations of a sensitive nature,” Pentagon spokesperson John Kirby said in a statement. “As soon as we became aware of the material divulged to the reporter, we engaged Politico at the highest levels to prevent the publication of information that would put our troops and our operations at the airport at greater risk.

“We condemn the unlawful disclosure of classified information and oppose the publication of a story based on it while a dangerous operation is ongoing,” he continued.

“The US KNEW roughly where& when the terror attack on Kabul airport would take place on Thursday…why were there US troops at that gate at that time?”
Kirby: “I’m absolutely not going to speak to a press story informed by unlawful disclosure of classified information…” 🤯 pic.twitter.com/Iy8nS2r01C

Can someone kindly inform me what the K in ISIS-K stands for? Is ISIS setting up franchises now? When did that start?

Khorasan is the word.

That sounds like one of those fancy materials for kitchen counters.

Khorasan. It’s the name of the province where this group comes from; sort of. They were originally Shia Pakistani militants/Al Qaeda sympathizers who came over the border to establish a Caliphite. They have roots in areas along and in the border area of Afghanistan, Pakistan and Iran. This group began about 8-10 years ago.

Keep in mind that Al Qaeda is Salifist Islam which is a kind of Orthodox reform ‘back to basics’ brand of Sunni Islam. So the Shia ISIS-K and the Sunni Al Qaeda are not natural allies, they don’t like each other. They are more like wary competitors loosely agreed to fight the Western Nations out of Afghanistan.

Someone on the inside is incensed by what is happening and wants this info to get out.

Obama 2.0: Taliban Equity and Inclusion, or Bush 1.0 before the surge.

How does Milley and Austin NOT RESIGN now ? ?

Do they have ANY HONOR or DIGNITY – let alone COMPASSION for those that died on their watch due to their malfeasance ? ?? ?