Report: Denver Spends Double on Homeless Than on One K-12 Student

Report: Denver Spends Double on Homeless Than on One K-12 Student

Denver wants to fix the homeless problem by advancing equity and affordable housing. Nothing about teaching them skills so they can obtain a job. Nothing about mental health issues. Just get them off the street and into a building. That’s not “helping.” 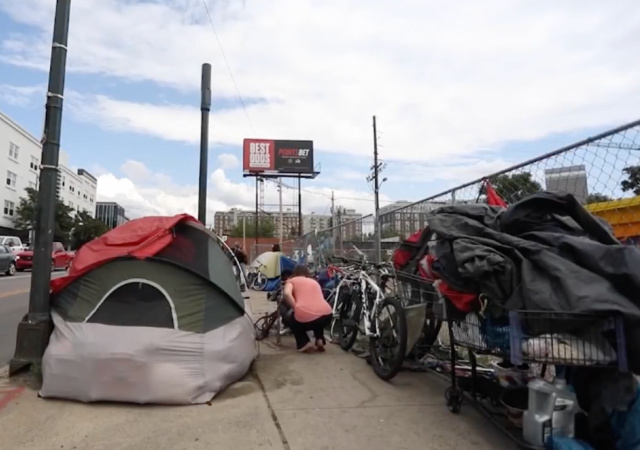 The Common Sense Institute discovered the Denver metro spends almost double on one homeless person than it does on one K-12 student.

The data comes from all spending: private, public, taxpayers, and charity.

From the report (emphasis mine):

4. Denver’s homeless budget is more than some of the departments in the Colorado government. 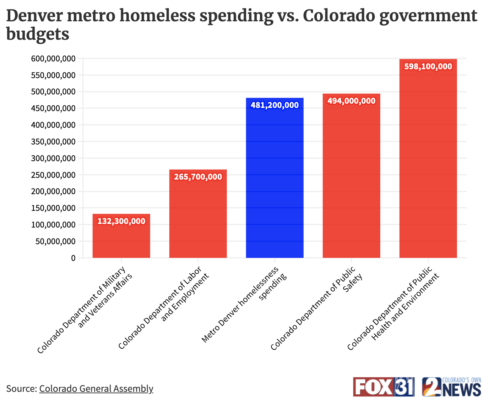 So as I said, the data combines all spending on the homeless. Denver’s Department of Housing Stability told FOX31, “While well intentioned, unfortunately this report also mischaracterizes nonprofit spending on homelessness to include their work in other areas.”

I find it suspicious that is all the city has to say about the report. Why not refute it with actual numbers? Do you think we will take the government’s explanation and move on? I do not trust any government on any level.

The Common Sense Institute said this is not the end of its study.

How to Solve It

The report came out as Denver released a five-year plan to address the homeless problem.

It looks like the plan concentrates more on housing and, of course, advancing equity.

I did not read the 152-pages. However, I did not see anything in the table of contents about teaching homeless people skills to obtain jobs. Nothing about addressing mental health issues.

It’s all about affordable housing.

Let’s talk about those who have the mental ability to function in society. Do they want to throw them in housing? Why not teach them how to perform a trade job? Why not help them get their feet on the ground?

Yeah reading the exec summary might have been sensible. The report links rising house prices and rental prices alongside Covid as the primary driving forces behind homelessness. There isn’t an indication that these folks can’t get a job they can’t afford the cost of the housing! Advocating for basic skills is fine but that’s clearly not the core problem.

If you are spending $40-100k on them and they are still homeless, it IS the problem

No need to compare that to the amount spent on students. Instead, compare it to the poverty level which is $12,880 per person. Either the homeless in Denver are living pretty durn high on the hog or else the money is going somewhere else.

Much of that money probably goes to those administering the programs.

Ding ding! We have a winner!

Yep, it’s just another government teat to suckle, and like all the others it will never go away, instead it will only get larger.

And after a career of failure, these bureaucrats will retire with guaranteed-benefit pensions for life.

It’s better spent on the homeless. At least they’re not learning crap that will handicap them for life.

I don’t even understand why anyone thinks the comparison made in the headline has any meaning at all.

The government only has to educate a student for a fraction of a day, five days a week, nine months per year, and maybe feed them one meal. (I’m old enough to remember when we bagged it from home or paid cash for it.)

For a homeless person, they have to totally subsidize his entire life 24/7/365. Of course that’s going to be more expensive. If it’s only twice as much to keep somebody alive every day as it is to put a kid in a schoolroom for part of a day, they’re probably doing quite efficiently.

“Nothing about teaching them skills so they can obtain a job.”

Let’s see. We paid to force them to attend grade school and then high school to teach them skills they could use to obtain a job. Does anybody think that the third time is really going to be any kind of a charm?

It is insane to be spending $41,679 per person to $104,201 per homeless person. Our priorities are so screwed up. A very large percentage of these people cannot be saved from themselves.

It’s insane how much we are spending on people who ilegally enter our country.

I’m not arguing about the amount; I’m only saying that comparing it to student expenditures is no more meaningful or logical than comparing it to the dogcatcher’s pension fund.

“The government only has to educate a student”

If Trump was still in the White House, the Joseph Goebbels media would blame the President for deliberately throwing people out of work. But with Biden* physically occupying the Oval Office (if not mentally there at all), we rarely have to hear about homelessness.

This makes sense. The liberals move to Colorado, vote their people in, and these, in turn, vote for programs that will employ their own people..

The current fad re the homeless population is housing. For about a third of the people that makes sense. This 1/3 have some event(s) that temporarily result in being homeless. Most pull out and up. Some develop issues while homeless that shift them to long-term.

The the remaining 2/3 are long-term or permanently homeless. They have difficult issues; addiction, dependency, mental illness. Providing these folks more than overnight housing is foolish unless it’s coupled with mandatory substance abuse treatment and mental health treatment.

The left sued to get the insane out of those facilities that were built to house and treat them- and now they’re hysterically demanding that we create more of the same facilities they protested against.

May Davis was just on Fox, she claimed most of these funds were actually federal. That might explain it. Feds want to destroy this country.

The only person that can rehabilitate an addict is the addict himself. He has to want it, and want it badly. Asylums should be reopened for the truly mentally ill.

Can you imagine a whole town of these people?