Pentagon Contradicts Biden: al-Qaeda has a ‘Presence’ in Afghanistan

Pentagon Contradicts Biden: al-Qaeda has a ‘Presence’ in Afghanistan

“We know that al Qaeda is a presence, as well as ISIS in Afghanistan, and we’ve talked about that for quite some time.” 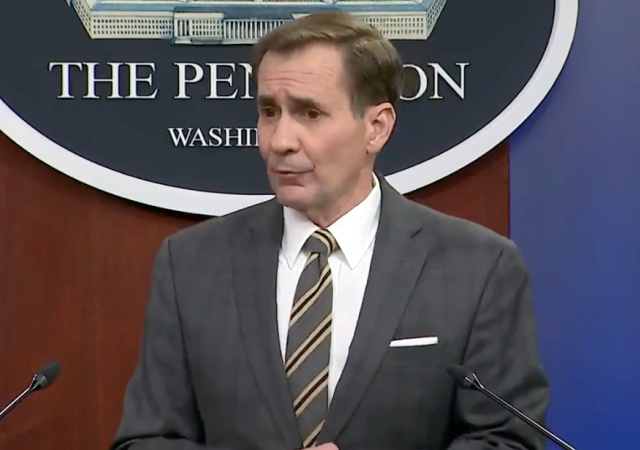 Biden’s own administration is proving he filled his press briefing with lies.

Biden claimed al-Qaeda does not exist in Afghanistan.

.@POTUS – "What interest do we have in #Afghanistan at this point with Al Qaeda gone.” A DoD IG report from Aug 17, 2021 says "the Taliban continued to maintain its relationship with al-Qaeda, providing safe haven for the terrorist group in Afghanistan." https://t.co/gdXiO8E13l pic.twitter.com/RytywJAqk0

Fox News National Security Correspondent asked Pentagon Press Secretary John Kirby to give her “an estimate on how many al Qaeda operatives” reside in Afghanistan.

Kirby could not provide her with an answer:

“I haven’t seen an estimate on that,” Kirby said. “OK, I don’t know if we have an exact estimate.”

“You don’t have military intelligence estimates about how many al Qaeda remain in Afghanistan?” Griffin pushed back.

KIRBY: “We know that al Qaeda is a presence, as well as ISIS in Afghanistan, and we’ve talked about that for quite some time. We do not believe it is exorbitantly high, but we don’t have an exact figure for you. As I think you might understand, Jen, it’s not like they carry identification cards and register somewhere. We don’t have a perfect picture. And our ability, our intelligence gathering ability in Afghanistan isn’t what it used to be because we aren’t there with the same numbers that we used to be.”

REPORTER: “But the President just said that there is no al Qaeda presence in Afghanistan. That does not seem to be correct.”

KIRBY: “What we don’t think is — what we believe is that there isn’t a presence that is significant enough to merit a threat to our homeland as there was back on 9/11, 20 years ago.”

An hour ago, Joe Biden said that Al-Qaeda was "gone" from Afghanistan. pic.twitter.com/f8X4ZqTwjQ

How did that guy make it all the way up the chain to rear admiral?

Kissing the right SJW ass and mouthing the woke diversity bullshit to the right people.

And, probably from a good family. You know: New England, Protestant, old money.

Being a useful idiot.

Rear is the clue

Biden’s “burden” h/t Obama. The handmade tales are being spun. A double-edged scalpel for the people… persons who wield it..

It’s worse. His arrogance is such that he truly believes he is untouchable no matter WHAT he does or doesn’t do.

To the extent of the democrat/Taliban party and the GOPe: he’s right.