“What I will say is that my beautiful, intelligent, beat-to-the-sound of his own drum, annoying, charming baby brother was killed yesterday helping to save lives.” 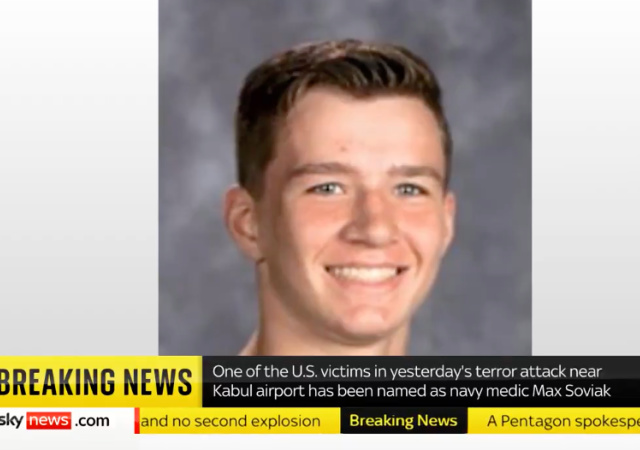 The terrorists in Afghanistan killed Ohio Navy medic Max Soviak on Thursday. He is the first victim publically named.

Max Soviak, a 2017 graduate of Edison High School, was killed as terrorist group ISIS-K did the bombings and gunfire at Hamid Karzai International Airport.

Soviak’s sister, Marilyn Soviak, expressed her sorrow for the loss of her brother on Instagram, writing in part, “I’ve never been one for politics and i’m not going to start now. What I will say is that my beautiful, intelligent, beat-to-the-sound of his own drum, annoying, charming baby brother was killed yesterday helping to save lives.”

A second photograph has emerged of Max Soviak, a US navy medic who was killed in yesterday’s attack in Kabul.

His sister has also posted on Instagram to pay tribute, saying her “beautiful, intelligent, beat-to-the-sound of his own drum, annoying, charming baby brother was killed yesterday helping to save lives”.

She added: “My heart is in pieces and I don’t think they’ll ever fit back right again.”

The first American victim of the Kabul airport attack has been identified: Max Soviak, a Navy medic in his early 20s. RIP. https://t.co/utqSkbWIjx

One of the US victims in yesterday's terror attack near Kabul airport has been named as navy medic Max Soviak.

Edison High School in the US said in a statement: "He was well respected and liked by everyone who knew him."

Thank you for your service, Max.

Feckless idiot RINO McCarthy just went on a news show to urge Pelosi to call the House into session so they can vote to extend the withdrawal deadline.

And oh, by the way, there’s a ‘letter’ demanding Biden’s resignation. So far it only has 26 House and 3 Senate signatures – of which Bitch McConnell and McCarthy ARE NOT a part.

In fact, McCarthy has apparently already explicitly said that if he takes back the House, he WILL NOT impeach Biden over this disaster.

McCarthy is all form, no substance. He’s now a warrior, but a party hack, slightly better than rats McConnell and Lyndsay Graham: all cut from the same GOPe cloth you wouldn’t manure in.

Marjorie Taylor Greene is the Pelosi antidote. Anything less is just more bullsh-t.

Corpsmen have always been special shipmates.

(I wish they weren’t called “medics”. Medics are Army folks.)

Forcing a consensus, per chance to take a knee, through empathy, is a politically congruent strategy.

UserP sums it up nicely…. The Biden Admin has its priorities arse-backward.

It sums up the contempt the likes of BIden and Pelosi have for the rest of us.

Remember: Pelosi stuck thousands of troops she called in into hot stuffy parking lots, rather than suffer viewing them in the streets.

It happened that way cause, on 6 January, all those brave congressmen were afraid they were gonna be the ones strung up.

FACT: Navy Corpsmen have the greatest number of awarded Medals of Honor. And for those of us who have served with them, that is no surprise at all.

Love our Devil Docs, even if they only tell us to change socks and drink water.

He hadn’t even begun to live! My heart is breaking for this loss. Rest in peace and may we be worthy of your sacrifice.

I told my wife yesterday that most of the 12 Marines who died in Kabul would be 19 or 20 year olds–the oldest maybe 22. They haven’t been identified yet–but young men of that age are the tip of the USMC spear. It’s not surprising that the Navy Corpsman (ironic that Obozo called them corpse men) who died was just four years out of high school–so maybe 21 or 22.

There’s a lot of justified blame to go around here–starting with the senile old dolt in the White House.

The sad part: those teen and early 20s Marines are seen by the Clintons and Obamas as carriers of drink and orderve trays at White House parties. Or, umbrella stands.

Fallen Marine David Lee Espinoza, a 20-year-old from Laredo, Texa, arrives home. No Biden or any other representative the administration is there. Shame shame shame.

“I am willing to throw it all away to say to my senior leaders ‘I demand accountability.’” |

May they find comfort in the arms of Angels…

they are a special breed

I have a daughter serving in the USAF overseas and my be deployed for those idiots in the Pentagon who have no business in uniform. I am livid that President Asterisk is even taken seriously by any person who has a mind. I am particularly angry at every asshole voter who thought that Biden was going to lead this nation to greatness.

Here is my suggestion:
1. Every General should submit their resignation today. You ain’t General Sherman.
2. Demented Joe resign.
3. Every Biden voter should get their ass to Afghanistan to protect this nation.

Finally, I say to the Blue Star and Gold Star families who lost a precious soul, we love you and grieve with you.