This should scare the living daylights out of everyone. 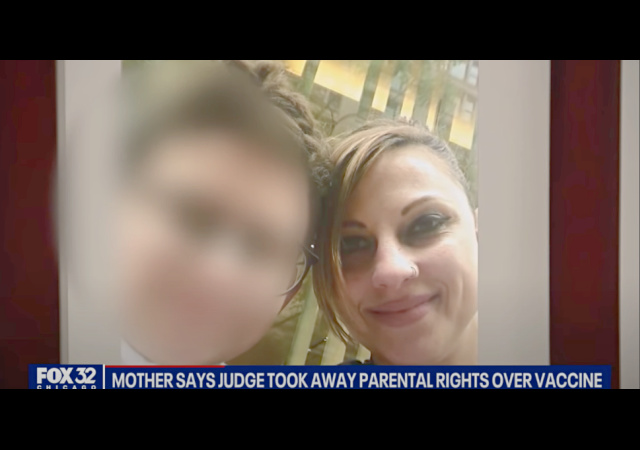 Rebecca Firlit told FOX 32 News that Cook County Judge James Shapiro stripped her of her parental rights because she did not take the COVID-19 vaccine:

In what all parties agree is a very unusual and perhaps unprecedented step, a judge at Chicago’s Daley Center has stripped Rebecca Firlit of custody because she refuses to get a vaccination shot.

“I miss my son more than anything. It’s been very difficult. I haven’t seen him since August 10th,” Firlit told FOX 32 News in an exclusive interview.

Shapiro took away her rights that day during a hearing between Firlit and her ex-husband involving their son. They share custody and parenting time with the 11-year-old:

She says out of the blue, Cook County Judge James Shapiro asked her whether she had been vaccinated. Firlit told Shapiro she had not because she has had bad reactions to vaccines in the past.

Shapiro then ordered that Firlit be stripped of all parenting time with her son until she gets vaccinated.

The article does not explain why the family was in court, but it looks like neither brought up COVID nor was it the topic at hand:

“It had nothing to do with what we were talking about. He was placing his views on me. And taking my son away from me,” Firlit said.

Firlit and her son speak on the phone and see each other on the computer via video chats.

“In this case you have a judge, without any matter before him regarding the parenting time with the child deciding ‘Oh, you’re not vaccinated. You don’t get to see your child until you are vaccinated.’ That kind of exceeds his jurisdiction,” Fernholz said.

“You have to understand the father did not even bring this issue before the court. So it’s the judge on his own and making this decision that you can’t see your child until you’re vaccinated,” Fernholz added.

The decision surprised the father and his attorney, Jeffrey Leving.

However, the father took advantage of the ruling and supports the ruling to protect the child “from an unvaccinated mother.”

Leving said something scary (emphasis mine):

“There are children who have died because of COVID. I think every child should be safe. And I agree that the mother should be vaccinated,” Leving said.

A spokesperson for Chief Judge Tim Evans and Judge Shapiro said they couldn’t comment because of the ongoing nature of the case.

Leving believes the judge is breaking new ground that could now play out in other custody cases. There is no timetable on when the appellate court will make its decision.

Good Lord. If they’re going to do this then apply it for all diseases. Children die of measles, mumps, DTaP, FLU, and chickenpox.

This should scare the living daylights out of everyone.

I work in family law for a time and the judges tend to do some of the most ignorant stuff.

As a CPA, my practice will periodically touch on divorce issues (in my case, dealing with valuation and tax issues , but not custody issues). Fortunately or unfortunately, judges in family court in texas have a lot of discretion, with virtually no ability to appeal bad rulings.

That being said, I suspect that there are a lot of other issues in the case, not favorable to the mom, that tipped the scale against her, with the covid vaccine issue, only a very minor factor.

In summary, dont rely on the press reports that she lost custody or even visitation due to lack of vaccination, at least not as the primary reason. Most states treat raising your own child as a constitutional right, which is only lost in rare cases.

“This should scare the living daylights out of everyone.”

Except the judge, of course, because he knows the good people of Cook County have already been successfully disarmed.
Watch for it coming to your town.

These are the judges who eventually rise to state supreme courts.

There better be more to this story.
>> If there isn’t – they’re playing with FIRE.

These are third-rail issues in our society. Fast way for any gov’t official to get a swift kick out the door is to F*ck with any of these.

Never though I’d live through an age where any of these things are even in question. What alternative reality have I been teleported ?

You mean, there are FOUR chief weapons of the Inquisition, right, Bishop? 😃

Color me a bit skeptical. Mothers are almost always awarded primary custody and in many States the system of divorce legally presumes the child should be with the Mother.

This was supposedly a hearing about child support so there could be much more to this than reported. Seven years post divorce and change custody? IMO, this is about more than a vax.

Jeffrey Leving is known as a father´s rights attorney.
https://www.dadsrights.com/

Speaking of which, I came across a delicious statistic — assuming your doctor is 10 miles away from your home, your child 8-15 has a greater chance of dying from the trip to get the COVID vaccine than he has of dying from COVID.

So,…. are we to extrapolate from this ruling that every parent who is unvaccinated for COVID-19 is at risk of losing custody of their children?

Unless there is more to this case than what has been reported, Judge Shapiro has overreached his judicial authority and should be sanctioned.

This judge is new to family court.

I wonder if he has been ordered to about the injection at each custody hearing.

So, of all the cases that Judge Shapiro has heard this month, he randomly decides to ask this particular mother if she has been vaccinated?!!! I smell a rat! This case smacks of back room shenanigans.

Our nation’s Courts of Equity (i.e. no jury) are very corrupt, and the organizations that should hold them accountable, such as Attorney Grievance Commissions and Judicial Tenure Commissions, are part of the protection racket.

Judges and others in the legal system should not have immunity. Can you imagine what medical care would be like if people were not allowed to sue for malpractice?

Many reforms are needed and through the power of the internet, the public is becoming aware of this disgrace. We, as citizens, have to demand better oversight and accountability. The feedback and control loops that work so well in industry need to be implemented in our Courts of Equity.

Or, perhaps there is more to this case than has been printed in the news media.

There usually is more to any story than what is printed in the news media.

Regardless, I stand by my earlier comment. It is highly inappropriate for a judge to bring up an issue that neither party has included in their petition and response. This aspect alone makes this story newsworthy.

Or perhaps he asks all of them; most of them say yes, the rest hurry to be good little sheep, and this one was the first squeaky wheel.

Does Troxel v. Granville (2000) 530 U.S. 57, 66 not apply? Primary Holding
There is a fundamental right under the Fourteenth Amendment for a parent to oversee the care, custody, and control of a child. In affirming, the State Supreme Court held, inter alia, that § 26.10.160(3) unconstitutionally infringes on parents’ fundamental right to rear their children. Reasoning that the Federal Constitution permits a State to interfere with this right only to prevent harm or potential harm to the child (emphasis added) – data world wide is expressively clear that COVID poses little harm to the child

If she’s had complications from other vaccines, that is usually considered to be a valid reason to not get a shot. So, barring other information coming out, this would seem to be a judge saying, “risk serious medical complications (which could lose you custody due to no longer being physically and/or mentally able to care for your child) or lose him anyway”.

Rebecca Firlit and her ex-husband were in a child support hearing Aug. 10 when Judge James Shapiro asked if she had been vaccinated, attorney Annette Fernholz said.

When Firlit said she had not — she has reacted badly to other vaccines and is under medical orders not to receive the shot, Fernholz said — Shaprio suspended her parenting time “until (she) demonstrates sufficient proof to this court … of vaccination against COVID-19,” according to court documents.

Chicago’s Fox 32 news program ran a story on the order over the weekend and on Monday Shapiro rescinded it, though Fernholz said she wasn’t sure that would be the end of the matter.

“The way this order is written, it kind of invites the dad to bring the issue back before him,” she said.

The ex-husband’s attorney could not immediately be reached for comment. A spokeswoman for Cook County Chief Judge Tim Evans said court rules mean neither he nor Shapiro can comment on the order.
https://www.chicagotribune.com/coronavirus/vaccine/ct-covid-child-custody-vaccine-judge-20210830-pcgg4sznzzfd7mqadk4yztzisa-story.html