No wonder the Afghanistan fiasco ticked off the allies so much. He promised them the U.S. would have a presence in Afghanistan after the withdrawal. 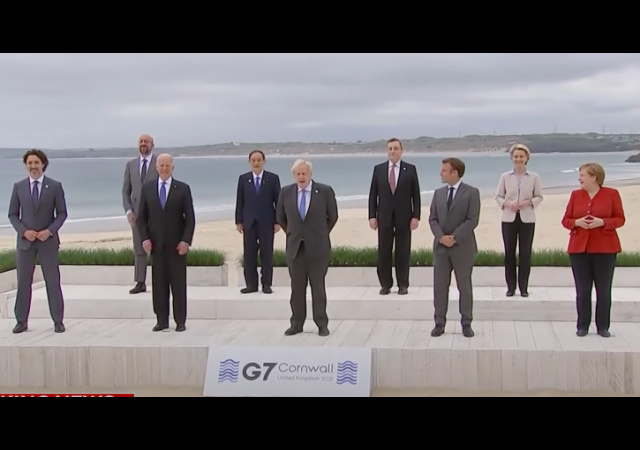 Bloomberg Media reported that in June, President Joe Biden promised G7 leaders the U.S. would continue its presence in Afghanistan after the withdrawal to provide security.

Biden promised U.K. Prime Minister Boris Johnson and other leaders at the Group of Seven summit in Cornwall, England, that “critical U.S. enablers” would remain in place to keep Kabul safe following the drawdown of NATO forces, the note said. British officials determined the U.S. would provide enough personnel to ensure that the U.K. embassy in Kabul could continue operating.

But the withdrawal of U.S. forces saw the Afghan government collapse as Taliban fighters raced across the country seizing provincial capitals, culminating in scenes of chaos at Kabul’s airport this week as Western governments tried to pull out their diplomats. The British embassy has since been evacuated, Johnson’s office said, and the U.S. embassy is now shuttered.

The discussions between G7 leaders highlight how Western governments were caught off guard by the speed of the Taliban advance. Foreign ministers in both the U.K. and Germany have faced calls to quit over their initially sluggish efforts to extract officials on the ground, other nationals and the Afghans who worked with them.

No wonder U.S. allies are so ticked off. I thought they wanted continuous war and nation-building.

Maybe they do, but this is a huge promise to break. Biden could have sent a text or quick email.

Biden told Americans the Taliban had no chance to take over Afghanistan. He told the allies a different story:

The British document also showed that the U.S. was privately briefing allies that they should be prepared for a Taliban offensive before any settlement that might have allowed former President Ashraf Ghani to remain in power. U.S. diplomats said that the Taliban would “test the Afghan government militarily” before they started taking seriously peace talks that were taking place in Doha, the note said.

That was like, four or five days ago, man.

This is is not mere stupidity: this is treason.

The people running our country are Susan Rice, Anita Dunn, and the rest of the obama scum Biden sold his soul to. So did that maggot Jill Biden: we can only imagine what that insecure low-life was promised.

Which is why I endorsed him to be POTUS — Comrade Biden.

What would it take to convince independent voters that they were gaslighted during Trump’s entire presidency?

Good question. For some the collapse of our southern border, more mask/vax mania, runaway inflation and the current debacle in Afghanistan is more than enough to outweigh mean tweets.

For those who need more proof, I was going say nothing would do but the Biden Admin is bound to offer more examples of absolute failure in the future.

The hell with them We can still have the American dream, but in a smaller nation. We have to leave the corrupt, the treasonous and the useless behind.

Secession is our only way back to living the Dream.

A sober evaluation and acknowledgement of reality.

Any ‘independent’ who hasn’t already come to that realization is a moron who is, and will be, easily swayed by the Dem-media complex propaganda machine.

Quite an understatement. He damage done by “Biden” (or whoever is handing him) is generational in scope, and has done damage to world freedom than Hitler and Stalin COMBINED.

This – and destroying our border – has set up our country for chaos, and set up the world to face war and genocide from Communist China.

Where’s NATO, where’s the UN? The more I think about this the more it is not just a Biden failure but a world failure. After we vacated Bagram, why didn’t NATO take it over?
NATO had already pulled out, the Afghans were surprised that had control of the property. Why didn’t NATO send a large force back in once it was evident that the Taliban was taking large chunks of ground each day and Bagram wasn’t an option anymore?
Did Biden tell them not to send troops back in? All questions that need to be asked and answered.
Remember, it wasn’t just an airfield, the prison was on that property as well with some 5000 inmates, many very dangerous.

As we discovered *through Trump), the US is the funder of NATO: the other countries use the defense money they save for their otherwise impossible social welfare programs. The damage he obama/biden gang has done will set back the US economically for years and years. Our baseline for our young people is pathetic: weak, ignorant, warped and spoiled: without ‘boomers’ to bail them out, a handful of youngish tyrants (zuckerberg and the like) will lord over them, if they are not first to be taken out by the obama-biden America Taliban infesting our nation.

Secession is.our only hope. We have to leave the hopeless behind.

NATO is basically us.

I hope the people realize this fiasco was brought to them by the news media who gaslighted them for the last couple of decades.

Love you sense of humor.

I’m honestly not sure which is worse.

That he promised it and didn’t do it, or that they were dumb enough to believe this demented idiot’s promises.

Perhaps it’s just me but if this is the G7 why are their nine people on the stage in the photograph at the top of the post. Who are the extra two and why are they there.