Major Earthquake Jolts Haiti; It Could Be More Powerful Than 2010 Trembler

Major Earthquake Jolts Haiti; It Could Be More Powerful Than 2010 Trembler

Hundreds reported dead after quake occurred along the same fault line as the devastating one in 2010. 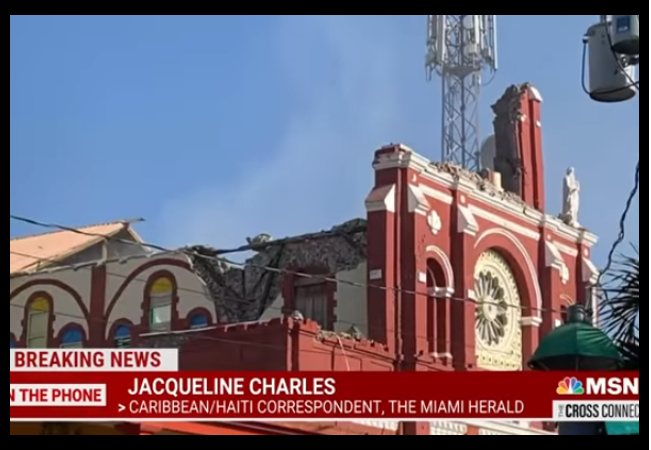 Another powerful earthquake disaster has struck the island nation of Haiti, leaving hundreds dead. Initial assessments indicate it was even more powerful that the 2010 trembler that slammed the area.

A major earthquake struck southwestern Haiti early Saturday, collapsing buildings and historical cathedrals in a nation still struggling to recover from a devastating quake that left more than 300,000 dead over a decade ago and was already in chaos after a presidential assassination last month.

At least 225 people have died, according to Haiti’s Office of Civil Protection, which manages the island nation’s disaster relief. The U.S. Geological Survey, issuing a “red alert” for the disaster, estimated fatalities could stretch into the thousands.

“High casualties and extensive damage are probable and the disaster is likely widespread. Past red alerts have required a national or international response,” the survey said.

The USGS placed the quake at magnitude at 7.2, as did the Puerto Rico Seismic Network, with the epicenter about 75 miles west of the capital of Port-au-Prince. If verified, it would make the seismic event stronger than the 7.0 quake that left much of the city in ruins 2010. Tremors were felt all the way in Jamaica.

At least six aftershocks rippled through the region, the US Geological Survey (USGS) reported.

Pictures and video posted on social media showed collapsed structures and panicked residents in their pajamas screaming the names of loved ones. A tsunami warning sent others fleeing from the coast. And Tropical Storm Grace was on a path to hit the country, with forecasters saying Haitians should be bracing for it later Saturday.

A general cloud of mayhem and confusion descended across the country’s southern peninsula, including unconfirmed accounts of a prison escape from Jacmel, one of the major cities there.

At least two cities reported major devastation: Les Cayes and Jeremie. Phone lines were down in Petit Trou de Nippes, the epicenter of the quake, and no news emerged immediately from that city, leaving Haitian officials to fear for the worst.

“Many houses fell. Many people are trapped under the rubble,” said Widchell Augustin, 35, from Les Cayes, where he lives. “We can hear people screaming under the rubble. People are running back-and-forth to the hospital.”

VIDEOS COMING OUT OF PESTEL HAITI, after the 7.2 earthquake of this morning. #HELPHAITI pic.twitter.com/5r1BL1twVQ

A tsunami warning was issued for the region. Lucky for Haiti, US federal help is on the way.

The U.S. Tsunami Warning System issued a tsunami warning after the quake, lifting it shortly thereafter.

U.S. President Joe Biden authorized an immediate U.S. response to the earthquake and named Samantha Power, administrator of the U.S. Agency for International Development, coordinator of the effort.

The earthquake appears to have originated from the same fault line as the 2010 shaker.

Both quakes struck on an east-west fault line at the convergence of two tectonic plates, large segments of the Earth’s crust that slowly move in relationship to each other. At this fault line, called the Enriquillo-Plantain Garden fault zone, the Caribbean plate and the North American plate move laterally, or side by side, with respect to each other at a rate of about a quarter of an inch a year.

The 2010 quake was centered about 30 miles west of Port-au-Prince. The quake on Saturday was about 50 miles further west.

Susan E. Hough, a seismologist with the United States Geological Survey who studied the 2010 earthquake, said there was no doubt that it and the one Saturday were linked.

“It’s well established that you do have this domino concept,” she said, where the energy released by one earthquake alters the stress patterns elsewhere along the fault line. “But we don’t have a crystal ball that tells us which domino is going to fall next.”

Our prayers are with the people of Haiti.

The main question: how much will be confiscated from the US taxpayers this time?

We can just use the funds from the Clinton Foundation that they didn’t spend on Haiti the first time round. A couple of hundred million can go a long way.