The 29-year-old mother just returned from maternity leave. Her partner is reportedly fighting for his life at an area hospital. 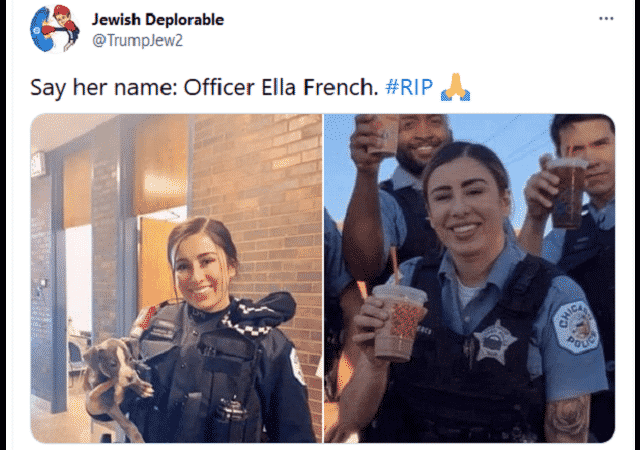 Chicago Police Officer Ella French was gunned down during a traffic stop in Chicago’s South Side on Saturday night.

The 29-year-old had just returned to duty following maternity leave; she leaves behind a husband and their two-month-old baby.  French’s partner was also injured in the attack and is reportedly fighting for his life at an area hospital.

Here is what happened. A #Chicago #Police #officer was killed in the #lineofduty.Police Officer #EllaFrench, 29 years old & just got back from maternity leave.She leaves behind a 2-month-old baby. Her partner, currently in critical condition. #BlueLivesMatter pic.twitter.com/w1g2Ae1GPZ

Female Chicago cop, 29, becomes the first officer shot and killed in the city since 2018 and her partner is left 'fighting for his very life' after a traffic stop on the city's South Side. MY HEART IS BROKEN
via https://t.co/8UTjQc82Yh https://t.co/FjP96CuHS4

This horrific incident just happened overnight, so there are conflicting reports at this time.  What does not seem in doubt is that she was murdered in cold blood, reportedly during a routine traffic stop.

The three suspects—two males and one female—are reportedly in custody.

💙 Chicago Police Officer and mother, Ella French, was ambushed and shot in the head during a traffic stop and later died at the hospital. A male police officer is in critical condition. All suspects involved in the ambush are in custody. She was 29 and had a 2-month old baby. pic.twitter.com/J1gzua2lFd

There is scant coverage of this tragedy perpetrated by depraved violent criminals of the sort coddled and encouraged in Lori Lightfoot’s Chicago.

Why isn't Ella French getting any MSM attention? #RIPEllaFrench https://t.co/ugmA2IOvvs

Chicago police officer 29 yr old Ella French just came back from maternity leave when police say she was gunned down by a man who was arrested in April for felony gun possession. Still think “bail reform” works? She leaves behind a husband and a 2 month old. 🙏🏻 pic.twitter.com/PooJ2TTyts

She was shot in the face and killed by a savage during a car stop.

Ella was 29 years old and had just gotten back from maternity leave. She leaves behind a two month old baby.

I’m liberal. I vote democratic most of the time. But this shit has to stop. @LoriLightfoot should resign or be recalled. And the @Chicago_Police should forget about “escalation” as we can tell, these thug murderers have ZERO Fucks to give. #TakeTheCityBack 🧵

When your government can’t protect its citizens what good is it?

It employs hundreds of thousands. Some even wirk.

Hey, 2smart, if not for government, who would collect tax money to line.. er, run it? Kinda like a toll booth collecting money for the maintenance of the toll booth.

Why would a woman two months past from giving birth to a baby be back on the streets as a police officer?

If anyone wants to get sick – just read the posts from the left. They are blaming the Chicago Police for this Officer being murdered by gang bangers.

Lightfoot is an obscenity, as is Di Blasio and Garcetti. But she’s useful to the left, who seek to destroy our society – and take it over.

Why isn’t Ella French getting any MSM attention?

Because MSM, and the democrat party, are allies to the murderous criminals that killed this young mother.

The title of “enemies of the people” is very well deserved.

I would assume that the only way a murder like this would get any media attention is if the officer were of “color” and the perps white. Given that, based on the photos, the officer is not a member of one of the approved victim groups, reporting on it does not advance the narrative.

“DEFUND THE POLICE HAS TO HAPPEN”

So said Congresswoman Cori Bush. And her looney Progressive comrades agree. 20 years ago – they would have been laughed at and ridiculed. Today the media fawns over them. They celebrate when a cop is killed.

The inmates have taken over. Criminals have better representation in Congress and in some states than law-abiding citizens.

Mayor Lightfoot, Mayor DeBlasio, Bush, AOC, Taib, Omar and the other “Squad” members are responsible for the crime wave.

“Mayor Lightfoot, Mayor DeBlasio, Bush, AOC, Taib, Omar and the other “Squad” members are responsible for the crime wave….”

No, WE are: our fecklessness in continuing to tolerate GOP scum bought us this hell.

The three suspects have been arrested.

1) You can bet that they will be released on low or no bail under the “bail reform” of the Left.
2) You can also bet that the charges will be plea bargained down.

Well, all they did was shoot a couple of cops. It’s not like they were parading.

And probably out on bail viva KH

Very sad, condolences to her family and baby

???
“Despite information circulating on social media while “Officer French” was trending on Twitter Sunday afternoon, Andrew French said his sister was not married and she had no children. Somehow, a falsehood that she had a 2-month-old baby at home and had just returned from maternity leave began making the rounds, but French and police Superintendent David Brown said that’s false.”

Heh, so did, fixed. Thanks!

The damage that this insanity has done will take DECADES to repair, if it can be repaired at all.

At this point NOBODY actually wants to be a police officer in a Democrat shithole. All of the officers with actual ability and talent have quit and gone to places they can actually be police officers, and the ones that are left are the bottom-tier ones that are unemployable anywhere else.

The rot goes deep and cannot be reversed without severe action that none of the Democrats even acknowledge MIGHT be necessary.

NOOOOOOO! Not true at all! The ‘retiring’ police officers will be replaced by Antifa and BLM goons. Remember: we have some of them elected to Congress.

This is the plan.

Kurt Schlichter wrote about these new “cops” in his books. Really astute observations by him!

It was all covered in “A Clockwork Orange” decades ago.

And many of us are to the point where we have lost out own respect for the remaining police officers in Democrat shitholes.

Though I feel extremely badly for this woman, in situations like this, I often ask myself: if I were exercising my guaranteed constitutional right to keep and bear arms within her jurisdiction, would she arrest and imprison me? And the answer is almost invariably yes, because that is their job description, regardless of how much it conflicts with their oaths.

If Lightfoot had told this woman to stand down as Antifa/BLM beat up rivals, but immediately arrest any non-Antifa/BLM who defended himself — such as we have witnessed in Charlottesville, Portland, Minneapolis, Austin, and St. Louis — would she do so? So far, every officer put to this test has failed it. (Any who have not are no longer officers.)

So I mourn her death as a woman and mother, but for me, the uniform adds zero sympathy.

I fully expected that opinion to garner disapproval.
When the time comes that you have to defend yourself against the zombie squad in your own neighborhood, and discover that not just they, but the local cops are arrayed against you in tandem, you may reconsider. Hopefully it will not be too late.

I would be better if police got the hell out of big cities. Then wall off cesspool cities.

Am I missing something, as far as I can tell, there really is no longer a use for them.

Rest in Peace Officer Ella French, and prayers for her & the other officer
fighting for his life in hospital.

Rest In Peace, sister. And hang in there, brother.

Think of it as a male cop being killed, to avoid the propaganda.

The life of an Ella French is worth 1,000 X the life of scum like George Floyd. Yet people will soon forget her!

Only because of the democrat/swamp media.

The lack of media coverage is not hard to explain. Ella French is an unperson in the eyes of our self-anointed moral and intellectual betters. Ella French doesn’t exist; Ella French never existed.

The same journalists who lied to us for months (some still continue to lie) about Officer Brian Sicknick being murdered by Trump supporters on J6 will conveniently disappear this story. The media’s ACAB paradigm remains untouched.

Already with a felony gun charge on his record, let’s enforce the existing laws for a few decades and see if they are effective before enacting new laws that won’t be enforced and criminals could care less about.

I oppose women as cops.

It’s not appropriate work for women, beause whether she was a mother or not, she should have been. Two months or 4 months or whatever months, of “maternity” leave is insufficient.

A man can become a father every day, a woman only once every 10 months….. under perfect conditions.

I invite anyone with better facility with language to say the same thing, but better.

Not all women want to be mothers

Some want to be fighter pilots

I find tour reasoning completely disgusting
That kind of reasoning, if you call it that, is what has held women back for tens of thousands of years..

But yes, maternity leave should be 12 month’s minimum…..

FMLA covers a certain amount of maternity leave ( unpaid time off), in addition to the FMLA the Police Union could offer additional benefits as well.

12 months of maternity leave? Sounds good but what is the direct cost in simple dollar terms to provide that? The other officers must pick up the slack a 12 month absence creates.

Under your 12 month maternity leave program would the LEO who are childless receive an equivalent benefit? If not why?

Your reasoning has led directly to genocide. I hope you’re happy..

Which territory are you looking to reclaim and are willing to accept the good, bad and ugly that may accompany that journey?

Katy– Women are not required to be cops. No one is. They are, however, allowed to chose to be cops, as long as they meet the requirements for the job. This was not always the case, but many decades ago women went to court to allow them access to the job. And with good reason, its a good job– steady work, good pay and benefits, although the hours can suck and some seriously shitty situations can arise…. not everyone is cut out for it.

Lightfoot has lost control over Chicago, yet the morons who live there will continue to vote for her and the Democrats. This crap is spreading all over the State of Illinois

Lightfoot needs to be lit up in Old Sparky.