LIVE: Biden To Address Nation On Tropical Storm Henri (Oh, and Afghanistan, too)

LIVE: Biden To Address Nation On Tropical Storm Henri (Oh, and Afghanistan, too)

“President Biden Provides an Update on his Administration’s Response to Hurricane Henri, as well as an Update on the Evacuation of American Citizens, SIV Applicants and Their Families, and Vulnerable Afghans.” 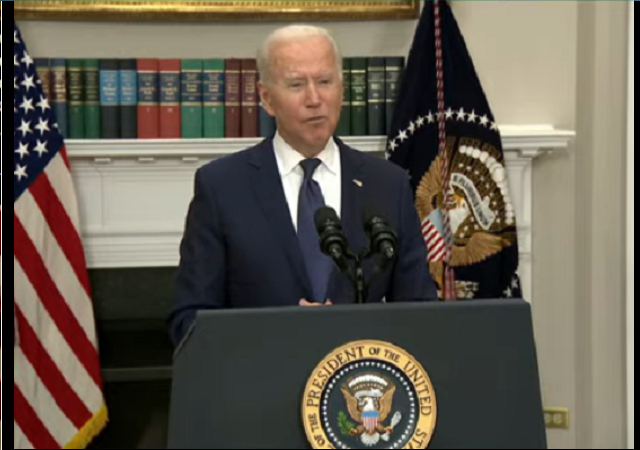 According to the White House, Joe Biden will be addressing the nation at 4:00 p.m. EST.

Yesterday, reports were circulating that Biden would address the nation Sunday on the Afghanistan situation, specifically the evacuation efforts amid the Biden-caused calamity.

Today, the White House is portraying Biden’s address to the nation as being primarily about “Hurricane” Henri, which hit Rhode Island as a tropical storm, with some comments on the Afghanistan evacuation.

On the off chance Biden actually addresses the Afghanistan debacle, we are running a “live” post.

We will be updating this post, so stay tuned.

Biden again saying the situation at Afghanistan was going to happen regardless of when, which means he's saying people would have been shot at and beaten well before the Taliban took over.

This is just false and insane.

US President @JoeBiden is giving an update on evacuation efforts in #Afghanistan. He says 28,000 people have been evacuated since August 14th bringing the total number since July to 33,000. @rtenews pic.twitter.com/uJ19pudyjK

I’m sorry but the amount of lies told during Biden’s last briefing makes me very skeptical. He went from not contacting our allies for days after the fall of Kabul to keeping in close contact with them personally?

Of course there is.

It just would’ve required starting months ago when Congress asked (and when Biden and Blinken said it wasn’t necessary). https://t.co/XqxsbqvwCi

New: Biden says there are discussions about extending airlift deadline past Aug 31 but they hope they don’t have to

If I had an Afghani for every time President Biden called Afghans “Afghanis,” I would have five Afghanis.

PRES BIDEN Q&A: RE SLIPPING POLL NUMBERS, 'HAD A DECISION TO MAKE;' REPEATS, HAD TO EITHER 'END THE WAR' OR INCREASE US TROOPS #Biden #Afghanistan

Biden says: “We’ve discussed a lot with the Taliban, they’ve been cooperative” about extending the Kabul airport perimeter. #Afghanistan https://t.co/tAIWNjwwKJ

"I had a basic decision to make. I either
withdraw America from a 20-year war…I either increase the number of forces there, or end the war."
-Biden on the decision to end the war in #Afghanistan

"Planes taking off from Kabul are not flying directly to the United States," Biden says they are landing to U.S. Military bases and transit centers around the world where security screenings take place for everyone who is not a U.S. Citizen. pic.twitter.com/E9FjkF2pA2

“I don’t trust anybody including you,” says Biden to @edokeefe who asks again if he can trust the Taliban

"History will record that this was the right decision"

Biden: Taliban has to make a fundamental decision. Are they going to be able to provide for the well being of the people of #Afghanistan…and if it does, it's going to need everything from additional help, economic assistance, trade & other things"

"they are seeking legitimacy"

President Biden: “this was the Logical rational and right decision to make” re afghanistan

Biden believes his decision to pull out of Afghanistan will "end the war." He says Americans will come to understand that he was "absolutely correct" in not increasing troops for a war that was "no longer warranted." pic.twitter.com/MBVymOTwGh

President Biden, “The Taliban is a “rag-tag force.” Was that before or after we gave them billions of dollars of weapons and equipment?

Biden: US will welcome Afghan allies 'once screened and cleared'https://t.co/ygi9PdwNNU pic.twitter.com/VmpMFAe99h

On Aug. 16 Pres. Biden said admin had drawn up plans for every contingency "including rapid collapse we’re seeing now."

So easy question: did those contingency plans include mobilizing US commercial planes? If not, what was source and extent of their failure to game this out? https://t.co/vMz3eYu5qu

But not “Rocky Road”

We already know Biden runs away and hides in his basement at even the suggestion of Rocky Road.

Is he going to pronounce it “on-ree” like the broadcast I heard today, or Henry like Americans would? Place your bets!

Or- will he screw it up completely?

It’s spelled Henri. So, “ohn-REE” would be just fine.

I was more amused by his pronouncing Taliban as “Tal-ee-ban” (kept getting a reggae tune about bananas stuck in my head, mahn).

Wait! I recall that tune very well. It was the story of a worker in the banana fields, and before he could leave each night, he had to go to a composer of Baroque music to weigh in.

I recall the lyrics like I heard them yesterday!

Of the two, I prefer the calypso by far.

If I had to choose between watching Joe Biden and Spongebob Squarepants I would elect to watch the latter. Spongebob is much more believable and realistic than the bewildered and confused Joe Biden.

I’d just shut off the set.

Biden: Time to move on.

British Parliament found him contemptible. So do I.

5000 people watching, 1.6K dislikes vs 345 likes at this moment. Last night’s Trump rally had five times as many people in the audience, and hundreds of thousands watching.

Tell me this barely-functioning potato is popular.

Why on earth does he need to address a mere Tropical Storm? Somebody is reaching for a distraction or something.

The world needs to know that that damned Donald Trump is still manufacturing hurricanes and flinging them northward at America.

I thought hurricanes were caused by homosexuals? That’s what Pat Robertson told us, and certainly a man of the cloth is respectable and can be believed.

I thought hurricanes (and earthquakes, and the successful Taliban takeover of Afghanistan) were caused by global warmi-, ahem, climate change.

No no no. Driving a car causes global warming. Global warming causes hurricanes. Hurricanes are a hockey team. Homosexuals play hockey. Hockey sticks are used to explain global warming which in turn is caused by driving cars.

No fear you will ever hear that explanation from a Democrat administration.

For there to still be such a wide range in estimates of US Citizens present in Afghanistan is a problem. We apparently have little idea when the primary mission of returning US Citizens will be completed. This, in effect, allows the administration the freedom to decide when they are done irrespective of the numbers airlifted out.

“Biden: US will welcome Afghan allies ‘once screened and cleared'”

They should just enter the US by crossing the southern border where no screening and clearing is necessary and save all the paperwork.

SpongeBob for president! Outside the improvement, no one would notice.

A human grizzly as his VP may be a good idea, but, I have some biased views on that.

Depends on whether he’s a friendly grizzly or not.

I am friendly, but, like any grizzly, have little patience for foolishness.

Henri is a dud, scarcely worthy of presidential attention.

Biden sees a dud as a reflection of himseld.

It was a dud.
But national media – and even local media – played it like the world was ending.

This morning there was no wind or rain in NYC – the eye was 160 miles away making landfall in Rhode Island, Yet the local media was still telling everyone to stay home – inside – for safety. My building circulated an Emergency Bulletin. Wait – What ? I lived there for 25 years and never got any such thing.

What is up with this ? What is going on with the media.

On a separate note – Everytime I go to you tune they give WWII-Nazi history as suggested video. Does this happen to anyone else? Do they serve this stuff to anyone who checks conservative content. It feels like a set up. Maybe someday they get you in court and say – “your honor his search history shows he has an interest in Nazi videos.”

I’m even suspicious of the 4.5 inch rainfall reported in Central Park overnight Saturday-Sunday and touted in the NY Post. JFK and Newark reported only about 1.5 in the same time.

I live up here in MA. It was a nothing burger near Boston. I suspect the area around Springfield got a fair amount of rain all the way out to Albany. It was only a tropical storm when it came ashore, Of course, you do not play around we any of these things, but it is hardly the thing of an address by the present dunce.

This was my sense, too, and the way the address went, it’s clear the “response” to a few states getting rained on was added in as an afterthought in an attempt to make Biden look remotely competent. It didn’t work.

He did act like a confident rodent snarling in a corner… trapped and with no way out but bluff. As for the upcoming G7 meeting, the USA under Biden has no more negotiating power. Stiffing our allies is the historically correct thing to do? How much of this is now pure Biden I am not certain but with Harris as a spare they may have cut him loose to fulfill BHO and OBL’s assessment of him. Unbridled … this can be really really bad. As for the dolts with stars on their shoulders…. busting down to private or just stripped of everything is about time.

Coastal Connecticut here. Some rain, but no damaging winds. Only 2% currently without power, not the crazy number Eversource warned might be without power for 8-21 days!

All part of the panic the American public seems to thrive on. Cranberries causing cancer, the swine flu “pandemic”, believing a totally hokey-sounding radio play and some even going as far as suicide, Covid…

I’m so happy I live in a coastal CT town with a town electric company. We didn’t even have a blip once yet today. (Crosses fingers, knocks on wood.) We were the last bit of town to get power back during Irene and it was still only 36 – the half of town Neversource services was out another 5+ days. Given how badly Eastern Connecticut has fared with those idiots over the years, I’m guessing Neversource were working to lower expectations so that if they only took a week to get all of the state back up, people would be happy.

Somebody get this festering boil off the stage. Permanently.

Arrest Jill for elder abuse.
Fire Sullivan and Blinken for gross incompetence.
What a friggen FUBAR !

No one is questioning the idea…it was actually Trump’s admin that came up with it and Biden is trying to take credit for it.

We are upset with the absolutely farcical execution of the idea by a corrupt administration that has no checks and balances…not even a press that can hold them to account.

This morning CNN has Adam Klinginzer on saying how Trump caused this and basically tied Biden’s hands to the pull out from Afghanistan.

Just watch – the deflection and misdirection propaganda will be in full force this week.