I thought Biden won in November. I didn’t realize Trump is still president. 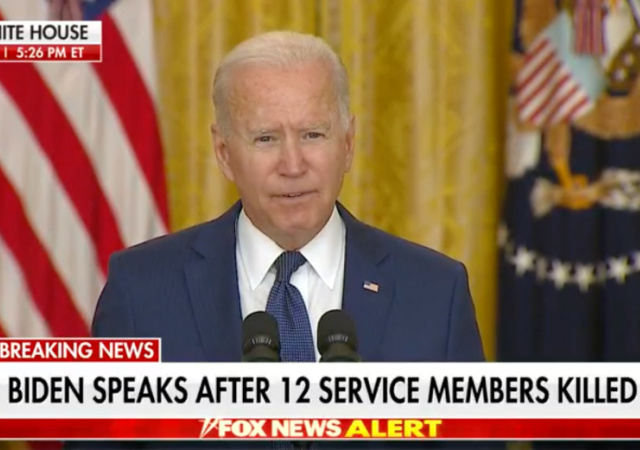 The man gave a painful address. He could not even call on reporters without an approved list.

But Biden again took responsibility for everything in Afghanistan, but then blamed former President Donald Trump.

After Biden blamed Donald Trump for the collapse of Afghanistan and demanded Peter Doocy agree, Doocy informed him that "Donald Trump is not the President anymore," and Biden lost it, burying his face in his hands and leather notebook.

Once he got up, Biden kept blaming Trump. pic.twitter.com/D7QBR2A2wd

BIDEN: "I bear responsibility for, fundamentally, all that's happened as of late."

No Mistake Depending on Taliban for Security

Joe Biden says it was not a mistake to depend on the Taliban for security outside the Kabul airport. pic.twitter.com/yzakdCC4rw

Biden just admitted that the only reason there was relative peace in Afghanistan before he came along was because of President Trump.

I’m sure that wasn’t on the teleprompter. pic.twitter.com/NEa35RfEbO

Biden Admits We Cannot Get Out Everyone

Joe Biden on Afghanistan: “Getting every single person out can’t be guaranteed” pic.twitter.com/FSmKUAAQR4

Biden Brought Up Beau for No Reason

Biden reflects on the death of his son Beau, who served in Iraq: "We have some sense, like many of you do, of what the families of these brave heroes are feeling today…My heart aches for you. But I know this: We have a continuing obligation, a sacred obligation, to all of you" pic.twitter.com/D2dQLadKdI

Wake me if he resigns.

It will be several years before we wake you, Rip Van Grizzly. So you might as well go into hibernation.

Sleep well and long, till the #walkawayPresident retaliates

We’d have to wake him first.

It’ll be the rhetorical version of bending over and taking it. The Taliban blew past Biden’s handlers’ red line today.

Why not be that arrogant, when you are wholly corrupted, treasonous and convinced you will get the Hillary Clinton pass?

“To look for the motive, look at the result.”

Biden is a traitor. He’s absolutely a puppet of Communist China.

Bringing up his son again

Who worked as a JAG…never got even a papercut.

The angst, sorrow, and pain over the Afghan tragedy that Hunter will pour into his next paintings should drive the price up considerably.

Well the result intended is exactly the same at Trump ie the withdrawal of US troops from Afghanistan so under your criteria Trump is a traitor too.

Also Bidens policies have been pretty antagonistic towards china so that doesn’t really make sense either.

He is struggling to READ and speak the words on the paper.
His eyes appear dead
He has SERIOUS health issues

And that’s after they gave him the best med cocktail they could contrive to prep him for it.

I wonder: is his doc descended from Herr Doktor Theodor Morrell?

Looked to me that, at several points, he was about to cry.

Forgive and forget is one thing
The TERRORISTS only understand an AGGRESIVE, DEADLY response!
Till then, the #walkawayPresident is just mumbling words that he has no understanding of

It looks like an attack on the Taliban by ISIS to me. The target is just used for press coverage.

But on positive note… President Popular will now be invading California to provide a kiss-of-death endorsement to Gavin Newsom.
Never underestimate the ability of Joe Biden to f* things up.

There is a train wreck waiting to happen. Not because it’s Newsom. It’s the potential of Joe crumbling apart while making an appearance.

I wonder how many Taliban died in this terrorist attack by ‘ISIS’.

I would wager the number is somewhere around 0.

His speeches are nothing but vacuous word salads—the kind I would expect, as a neurologist, to see in Wernicke’s Encephalopathy patients.

“Wernicke’s Encephalopathy”. That sounds like one of those things where, if you can pronounce it, you don’t have it.

I’m sure that all the Xi-den voters — virtue-signaling, self-congratulatory, narcissistic idiots with their holier-than-thou, “woke” propaganda yard signs and pathological hatred of President Trump and conservative Americans — are still proud that they voted for this utterly vile, dim-witted, tottering, feeble, corrupt, mendacious, Chinese communist-installed puppet/vassal/dotard/dhimmi. And, the few that are expressing regret have no excuses for their naivete and their gullibility. The Afghanistan withdrawal debacle was a preordained event, the minute that you choose to empower American-hating and flagellating Dhimmi-crats who are constantly denigrating this country and who resent the U.S.’s global leadership.

Obama 2.0, from Iraq to Afghanistan, with stops in Libya, Ukraine, Syria, etc.

… and the border, when they have some extra time. Such a “burden”, with more in progress.

Quick, somebody get ahold of liberals favorite psychiatrist Bandy X Lee to tell us how he’s mentally incapable of doing the job and needs to be removed.

Oh, what? She ONLY did it for Trump?

Yeah … it was all Trump’s fault. Except, of course, that it wasn’t Trump’s fault that a retarded, dementia-ridden, retarded pedophile couldn’t manage to follow the plan left to him by a better man.

At the end of World War II we were able to bring everyone we wanted home.
None of the people on the losing side were unable to get their people back from us.

Biden did something no other president was able to do. He replaced the taliban with the taliban.