“This is simply not the America we signed up for.” 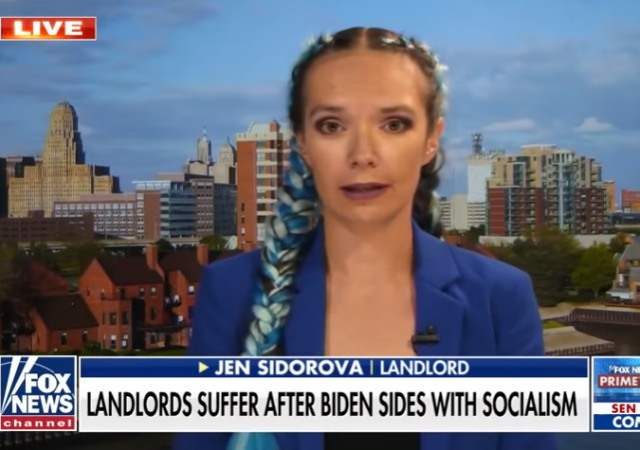 The CDC’s blatantly unconstitutional extension of the eviction moratorium, approved by the Biden administration, and cheered by the Squad wing of the Democrat party, is nothing more than government sanctioned theft.

Landlords across the country, many of whom have not received rent payments for months, are being told to just accept this, with no consideration for their needs.

A woman who came to America at 18 and now owns rental property in Pittsburgh, appeared on FOX News this week and explained the impact this has had on her.

JEN SIDOROVA: You know, what I hear is that a lot of people just going out of business, exactly as you said, or maybe they’re switching to the model that’s more like a vacation rental, a short-term rental other than long-term. What it’s really doing is that’s pushing young people or vulnerable people, who we might normally give a break and give them a chance, we simply can’t do this anymore because we cannot run the risk of having somebody living in our property for free and us having to pay mortgage and utilities and keeping it up. It’s just impossible for somebody who only has maybe two or three units…

They made landlords villains. But honestly, I am an immigrant. I moved to this country when I was 18. I worked every day. I paid my taxes. It’s been like 15 years since I was able to afford a property and now it’s my time to build some generational wealth and invest, and the government is taking it right out of my hands. They’re robbing me out of my American dream. Honestly, I feel like I speak on behalf of all the hard-working immigrants in this country. This is simply not the America we signed up for.

There are reportedly billions in unused funds to pay these landlords, but can you imagine the nightmare of trying to claim them?

One of the most amazing aspects of the extension, is that Biden knows it doesn’t pass the smell test.

Under intense pressure from liberal Democratic lawmakers and activists, Biden announced Tuesday that a revamped version of the eviction ban that expired on July 31 would be reimposed by the Centers for Disease Control and Prevention as a pandemic mitigation measure. His reversal came after senior administration officials had said for a week that such a move would be fruitless and perhaps unlawful as a result of a Supreme Court ruling in June.

“The bulk of the constitutional scholarship says that it’s not likely to pass constitutional muster,” the president told reporters, before adding: “But there are several key scholars who think that it may and it’s worth the effort.”

Biden did this at the behest of Cori Bush, AOC, and progressive journalists on Twitter.

That’s who has power over him, and he will literally rob innocent Americans to placate them.

Undermining the concepts of property owners rights and contract law right before our very eyes.

Straight from Marxism to your door.

All your stuff belongs to us. You only think you own it. So what if there is a takings clause. After Kelo, that clause is dead.

It is past time that this country reverted to its original republican form. Yes, small r as in republic, although I would not mind if there were more Republicans in charge. The Constitution is a contract between the people as to how they will be governed. Like any other contract in law, it may be amended, but otherwise remains constant. This “living Constitution” stuff is just a fancy way to play Calvinball.

Wall Street will buy her out cheap and, rent them out for fun and profit. Not for her, of course. Then mandates that you are vaxxed to rent and wear a mask at all times in your own home will be pushed by the genocidal CDC. Other than that, what could go wrong?

In the end, this is a taking by government without compensation, when the dust settles the government will have to compensate landlords, and the rest of us will end up paying. How many of the rent weasels are receiving rent money as aid, and spending it on other things?

The bulk of them. There are a number of stories about pieces of shit stopping rent payments, then using that money to buy their own fucking house and stiffing the landlord for tens of thousands of dollars.

And at the end of the day, just like the rest of the Democrat’s bullshit, the people that this insanity hurts most is people that actually need help.

Because in the face of this insanity, landlords are now (completely reasonably) demanding the first 6-12 months rent in advance, and huge security deposits.

Rent is SKYROCKETING in Democrat shitholes because of this insanity.

Most states have limits on how large a security deposit and advance rent you can demand. Even if they don’t, so few tenants, even good ones, can afford 6 months rent in advance plus a huge security deposit that such a policy is self-defeating.

If the alternative is someone living in your property, using utilities, and causing wear and tear, an empty apartment or house might be a better way to go.

This would seem a government taking just as surely as a government mandate to house troops in your property without compensation would be.

Yet rent control would sees no less a violation of the Fifth, yet American cities have been doing it for decades.

“Robbing me of my Amerian Dream”

American Dream? That is so yesterday. Welcome to the future.

Welcome to the Progressive nightmare.

Yet another attack on small biz…screwing over the little guy so Big Vulture Capitalists can swoop in, buy things for a song, then turn around and charge outrageous rents just because they’re the only game left in town.

One thing I’m not sure about under the CDC ruling, once the terms of the lease expire, does the landlord have the right of removal? It’s not an eviction, it is the expiration of a contract between two parties that was not renewed.
If a lease expires and they can still stay without payment that would take the problem to a new level.
If I was a landlord, I would not offer a one year lease to anybody. Six months would be a maximum lease term if I was a landlord in this environment.
How are the credit reporting bureaus handling those that aren’t paying, some landlords require a minimum credit score to approve a lease?

If the tenant refuses to leave at the expiration of a lease they still have to be evicted, you can’t (legally) remove them yourself.

while I’m not a lawyer but I would believe in a legal sense, you don’t have a valid lease once the lease has expired. They aren’t being evicted, technically they are squatters at that point. I haven’t read anywhere that there is a mandate that all expiring leases are automatically extended under their previous terms. However after doing some research on a few states, removing a squatter entails a similar process to evicting someone. I would expect some pushback at the state level if landlords can find a way to band together on this issue and get the laws modified.

On another front, the long term ramifications of this will be higher rents, larger deposits and shorter termed leases in the rental market. The people who can least afford will be damaged the most.

You still must file the paperwork with the CT, pay the filing fee, get the Sheriff to deliver/post the notice, the tenant gets to respond (usually they don’t) ECT.

In FL which has a very streamlined process it took me 6 weeks to evict a tenant pre Covid. Rent due on the 1st, but accepted till the 5th. Then eviction process begun.

Landlords have to be strategic as well. The current and next month are net zero for rent anyway so there’s no incentive to push too hard on the tenant. Do so and risk your building getting damaged.

Better to file, be a pro, don’t be emotional and get the tenant out without damage. Use their deposit to offset a patch and paint in preparation for a new tenant.

There is no eviction moratorium.

Rent amnesty is just a numbers game, another way for the Dems to use someone else’s money to buy votes. There are many more tenants than landlords.

This is 100% on Kavanaugh’s complete and utter cowardice and dereliction of duty.

He OPENLY ADMITTED that the original moratorium was unconstitutional, but decided that since it was going to expire that they didn’t need to ACTUALLY go ahead and rule on it and prevent them from ever doing it again.

No, he relied on a limpdick and legally irrelevant ‘opinion’ that if they extended it that he would probably find it unconstitutional.

And the Democrats took that for what it was – WEAKNESS AND COWARDICE, that he didn’t actually WANT to strike it down and have to deal with people saying mean things about him.

Now the absolutely and pathetically predictable has happened. Democrats have called your fucking bluff you complete coward, and now you have to do what you SHOULD have done IN THE FIRST PLACE, and in the meantime people are receiving what may be unrecoverable financial damage.

Truth. Men are tested in times like these.
>> These are events of biblical proportions.
In an age that calls for strength and integrity – we find most are weak and cowardly.

Agree, Fear of the Left is the biggest motivating factor in the country, world really.

Ummm there is rental assistance for both renters and landlords available. Maybe that should be pointed out before making blanket statements

How will the courts deal with this clear violation of the law and constitution? I would think that any landlord who seeks to evict would easily win in court.

Never was a communist born who wouldn’t cross the street to kick a landlord.

NO TAXATION WITHOUT RENT PRESENTATION.