Congress must step in! Congress to the rescue! The Betters will rescue America! 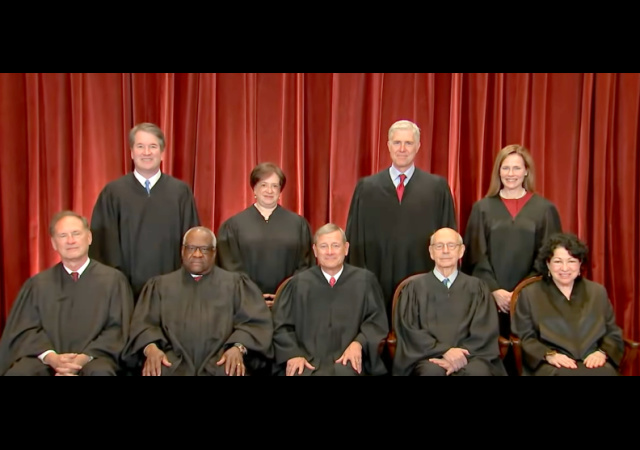 The Supreme Court ruled the CDC overstepped its authority with the eviction moratorium. I mean, where is it written that the CDC can stop landlords from evicting tenants?

Anyway, the leftists lost their minds.

A group of right wing extremists just decided to throw families out of their homes during a global pandemic.

This is an attack on working people across our country and city. New York won’t stand for this vile, unjust decision. https://t.co/Tw6Bt97GC9

Um, SCOTUS isn’t throwing out people. The landlords would do that.

Wow all the way outside and everything. pic.twitter.com/2mj2mJwVZN

Ah, yes. Time to expand SCOTUS because they ruled against a Democrat social project.

If your member of Congress isn’t a cosponsor of the Judiciary Act, which would expand the Supreme Court to restore balance, today would be a good day to urge them to be. https://t.co/KRLmu2D4KO

Congress must step in! Congress to the rescue! The Betters will rescue America!

Congress must immediately step in and do everything possible to keep people in their homes.

Yesterday’s cruel ruling from the Supreme Court is a matter of life and death for millions.

We simply cannot allow the Supreme Court to throw millions of families out of their homes.

Congress must do everything possible to extend the eviction moratorium.https://t.co/NeaDSChR5G

Congress now must act immediately to stop a wave of evictions that will devastate millions of families.https://t.co/67hyY6f7LN

Babies. Literal babies. They hate landlords and yet didn’t some of the hard leftists collect a lot of money in rent? Oh, yeah! Reps. Tlaib and Pressley disclosed their rental income.

Hypocrites. They expose themselves every single day and get away with it.

Congress Must. People Must. Scotus Must.

Next thing you know, the entire Democrat party is going to demand to speak to the country’s supervisor.

If only we had one.

‘Congress must act’; too bad they left town ahead of this very predictable SCOTUS decision. Deserting DC for fundraising in your district while the Afghan debacle continues and Citizens are left behind has a price.

“Congress must act… to give an agency a power it did not have, but used for an extended amount of time before being stopped.”

Hey, I’ve got this idea. How about government stops using powers it doesn’t have, period.

It was declared illegal 3 times.

Congress must act! That was the whole point. They must and they didn’t. Why blame the court?

Warren made her money kicking out owners who couldn’t pay their mortgage,. She would buy the loans at a discount and kick out the owners.

It’s women voters, not congress. Feelings overflow structure, so nothing nationwide that they do is structurally stable.

Men see side effects not through psychic powers but by noticing the change in the flow of dollars. Women aren’t interested in math-like stuff.

Isn’t is too bad so many men don’t realize this and vote accordingly?

Can YOU write a mainframe program in Assembler? I can, and I’m female. (over 15 years of programming in the workforce.) Stop acting like a far leftist and dividing people into groups according to your prejudices.

It’s not hard, Everybody in the programming class, men and women, were able to do it, back when that was the going language.

A few positively shine at it, not many, in producing tight fast reliable code with no particular effort.

The difference between men and women isn’t whether they can do it but whether they obsess over it enough to get top marks at it, or prefer instead some social life. Men get a dopamine hit from it and women don’t. That’s a huge motivation difference.

It’s even harder if you’re stupid.

Wah, wah, wah!
Pour me a mug of Marxist tears!
“Muh private property — if you want one that won’t ban you, build your own!”
Right? Right?

Fully compensate property owners, offer Obamacare holidays, and the people… persons can stay, but what happens to the Taliban and other parties?

I think you meant Mayor, not Gov.

Though I am glad to know he can’t run for another term this year. Though I’m not optimistic that the downstate machine won’t pick yet another commie.

The primary has already been held. The D candidate, and therefore the almost certain next mayor, is Eric Adams, who isn’t a commie, but he is something of a race hustler. He was BLM before there was a BLM; but he positioned himself in the primary as an advocate of law and order and of funding the police.

It’s al most like SCOTUS did its damned job. For once.

It was not unconstitutional, at least according to the court, just not authorized by law. Congress could pass a law authorizing it.

Fair warning to babies: past, present, and progressive, be certain to receive affirmative consent from the landlady, and, for good measure, the landlord, before agreeing to conception. The government will not only not support safe sanctuary, but will guarantee affirmative aid to evict and deny Life, Liberty, and the pursuit of Happiness. Also, given the Planned Parent/hood precedent, and the recently expanded rules of self-defense, anyone else who is deemed politically incongruent (i.e. “!=”) is on notice.

The left believes there is NO LIMIT to government power.

Why don’t they just provide aid to renters so they can make their mortgage payments? The money has been appropriated.

The Supreme Court agreed with Biden that Biden’s eviction moratorium was unconstitutional.

Renters either have jobs or if they lost their jobs (or had their hours reduced, etc.) there was increased unemployment they could use to pay their rent. The ‘rental relief’ program was not needed.

The ‘rental assistance’ that was allocated is more of a joke than anything. Both the renter and the landlord has to sign the paperwork, and the money comes with a lot of strings attached. In my jurisdiction, for example, one of the many requirements is that the renter’s income must be below 80% of the median income and the tenant must provide the documentation to prove this!

In other words, a landlord can’t (until the Supreme Court ruled yesterday) evict and a tenant for not paying their rent, but the landlord also can’t collect rent from the ‘relief program’ unless the tenant agrees to provide paperwork showing what their income is! The renters have no motivation to go along with this. Even if you can convince the renter to go along and provide the documentation, the landlord might not get the full monthly payment, BUT the landlord must agree to not evict for failure to pay for any month they receive a single dollar for AND if it turns out the documentation was incorrect (from the tenant) the landlord has to pay the State back for the funds received. Landlords (in most States) don’t allow for rental relief if the Tenant didn’t pay but moved out before you applied for relief.

The federal law left a few provisions up to the States, but the law suggests that States require landlords to agree to not evict the tenant for five years AFTER receipt of funds. Oregon requires the landlord to forgive 20% of the rent owed to them.

Congress must immediately step in and do everything possible to keep people in their homes.

Congress must immediately step in and do everything possible to keep people squatters in their other people’s homes.

who lives in all the congress members homes when they are supposed to be in dc doing their elected jobs? they can open their own homes to as many people as possible. They can bring in bunk beds and air mattresses.
have they gone to the counties and ordered them to stop foreclosures for owners of rental property who haven’t paid their property taxes. have the utility companies stopped shutting down service for non payment?

Marxism is so destructive, everything they think is free thanks to the back of others.

Free stuff cannot go on forever.
Some day, someone must pay the rent.

The majority of the sampling of tweets is from members of protected classes.

It would appear we still have our Constitutional right to property. These whiny children need an enducation

The English language welcomes a new word: “unhoused.” No longer “homeless.” Is that because it conveys conduct by another to remove one from one’s house? In other words, one is the victim of another’s act (namely, eviction). Someone should tell Cori Bush the facts of life: small-time property owners are being unhoused, too, by renters who exploited the eviction moratorium and refused to pay their rent, knowing they could not be evicted. The Wall Street Journal has documented this phenomenon.

A new phrase will come into use as the opposite of unhoused: People of Shelter.

Is that because it conveys conduct by another to remove one from one’s house?

In general the left doesn’t like simple nouns that describe people who are unfortunate, when they can use transitive verbs that make them victims of other people’s misdeeds. Have you noticed how they have replaced “slave” with “enslaved person”? “Slave” simply describes a status of being; this person is a slave, for some reason or another. He may once upon a time have been enslaved, perhaps many decades ago, or he may always have been a slave. But now he isn’t a slave, he’s a normal person who is being enslaved every second of his life, and his current owner is not in fact his owner but the person who is constantly enslaving him. One word changes the entire picture, and it’s been foisted on us without any discussion.

“Soon-to-be-former NYC Gov. Bill de Blasio” – the last time I checked he is the outgoing Mayor and that NYC does not have a Gov. 🙂

I do evictions for a living and the reality is squatters and deadbeats will be evicted. The abuse of this is rampant and most landlords are regular people who just happen to own a second home.

The lesson here seems to be that once you open an emergency everything-is-free-store many of those who helped themselves to the free stuff will feel entitled to free stuff forever.