“I blame my own military leaders. … Biden turned his back on him. That’s it.” 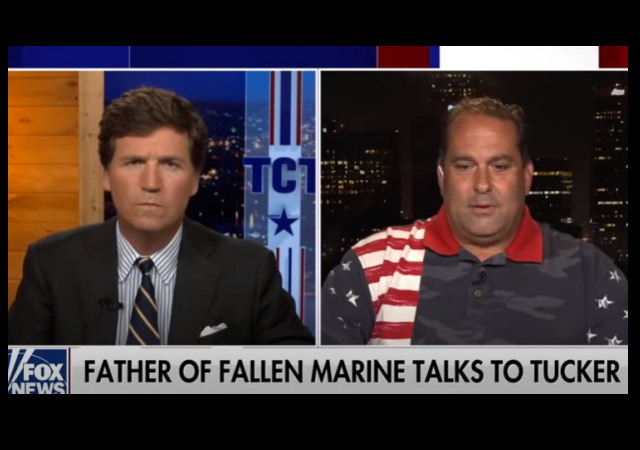 The families and friends of over a dozen members of the military are grieving right now over the loss of their loved ones in Afghanistan, and the nation mourns with them.

Steve Nikoui, the father of Marine Kareem Nikoui, has been speaking to the media. He is upset with Biden and who could blame him?

Jordan Williams reports at The Hill:

Father of slain Marine: ‘Biden turned his back on him’

The father of a U.S. marine who was killed in the suicide bombing at Kabul’s airport says President Biden “turned his back” on his son.

Steve Nikoui told The Daily Beast that he found out his son Kareem Nikoui was killed in the attack when Marines arrived at his home to deliver the news around 7:15 p.m. Thursday evening.

He told the news outlet that he’s still in shock about what transpired.

“I haven’t gone to bed all night,” Steve Nikoui said. “I’m still in shock. I haven’t been able to grasp everything that’s going on.”

He told The Daily Beast that he wants to “respect the office” of the president but feels Biden let his son down.

“They sent my son over there as a paper pusher and then had the Taliban outside providing security,” he said. “I blame my own military leaders. … Biden turned his back on him. That’s it.”

“They sent my son over there as a paper pusher and then had the Taliban outside providing security,” Steve Nikoui, the father of Kareem Nikoui, told The Daily Beast. “I blame my own military leaders. … Biden turned his back on him. That’s it.”

Steve Nikoui told the website that he was notified of his son’s death by a group of Marines who showed up on his doorstep Thursday evening. The elder Nikoui said he had stayed home from work after hearing the news of Thursday’s attack and had been “glued to the TV” waiting for any word of his son.

Nikoui said the Marines who delivered the dreaded news were “more choked up than me.”

“I was actually trying to console them,” he said. “But at the same time, I just wanted them to get out as soon as possible so that no one from my family came back and saw them. I thought it appropriate that I be able to tell them.”…

Nikoui went on to compare the area of the airport Kareem and his colleagues were patrolling to a “turkey shoot.”

“Basically, it’s funneled into like a single-file type [of] entry point at which, you know, if you have any sort of chaos of any sort, they would all gather to that one funneled area [in] which they would all be susceptible, and I think that’s exactly what happened,” he said. “It was just basically so chaotic and not really planned out. Now, I’m a carpenter and even I could spot that with my untrained military eye.”

Joe Biden has much to answer for.

Think about those numbers for a moment

112,000 new Muslims with Terrorists thrown in for good measure

The sooner you accept the reality that Biden won the election, in a series of overtly frivolous lawsuits to pretend he was claiming fraud Trump never once claimed fraud in any state, and that we have work to do to defeat Biden the better.

Your trying to insert what at this point (months after election and still no evidence for any state being flipped by fraud) I would call a lie is a campaign contribution to Biden’s re-election effort.

Oh Danny boy, the pipes the pipes are calling you

Afghans found out first hand that [American] elections have consequences.

Biden, and his 81 million voters, better enjoy their victory while it lasts. If Biden and his Junta keep displaying their particular ability to fuck things up like champions its gonna be a very, VERY short victory dance.

Yes we should be campaigning on meaninful things including Biden and his high command botching a withdrawal.

Did the Democrats Russia stole the election narrative communicate to you that you made a horrible horrible mistake and should vote Biden in 2020?

For me that narrative was a gigantic F U to me personally and an attempt to take my right to vote away and an insult to my intelligence suggesting that I voted because of a (mythical) Putin endorsement.

The Democrats got saved however by controlling media, academia, the government institutions and the cultural institutions which allowed them to push a lie.

We control none of the above so our pushing a lie just disgusts people who voted Biden and makes it a lot more likely they will do it again.

I can’t attack the high command for it’s incompetence in withdrawing BEFORE pursuing an evacuation, failure to have a list of allies who deserve American protection etc I have to pretend Trump won an election he lost by 7 million votes to do that?

20 years they will be about half a million, another 20 years about 2.5 million. It seems that everything the Biden Harris administration does is aimed to disenfranchise white people in America.

Bingo.
There’s been a 25 year undeclared war on white people.
Until 2020 it was subtle – now it is overt and pushed by all the ne0-racists.

Was it Biden or the entire United States government?

Mark Milley testified before congress that Bagram Airbase wasn’t needed for an evacuation, that is very strong evidence that blaming it all on Biden is wrong.

It should be blamed on

@Danny
The entire National Security / Intel. Agencies must be cleaned out. These idiots don’t know a NaSec threat if it kicked then in the arse.

In Vietnam we fought for “hearts and minds” of the people. Today we allow opponents to infect the hearts and minds of our own people with divisive dribble that is designed to undermine our society.

Fire 3/4s of the NatSec and Intel. Agency staff / researchers- they are worthless.

I 100% agree with everything except for ” The divisive ne0-racism which teaches it’s okat to hate Whites is a NatSec threat.” it is a minor quible but I would just use the term “racism” instead of “neo-racism” the term neo-racism implies it is somehow different from past race based obsessions.

It was oblunder, he started getting rid of competent officers and bringing in his minions who would do his bidding. Changing America for the worse.
It’s why we’re now seeing just how bad these political degenerates have risen to the top by suckling their masters so they can share in the power.

Heart-breaking. We have three-and-a-half more years of this idiocy and bloodshed to endure, until President Trump defeats Xi-den for a second time.

Only if we get rid of the machines , mail in ballots !!!!

minor, but to those who serve/d, important nit”

Marines are just that, “Marines”
Navy Corpsmen are just that as well, or “Doc” if you are one of *their* Marines.
Soldiers are members of the US Army

“soldiers” is a generic, inaccurate, term for uniformed military personnel by media types who don’t care about accuracy, and civilians who don’t know any better, in part because of the MFM.

and i thank you….

My sincere condolences to Mr. Nikoui and his family on the loss of their son. His death, and the deaths of the others serving with him, should not have happened.