Graham has destroyed–in supporting a pork-stuffed, racist, and unpaid for package–whatever good will he had among the base of the Republican party 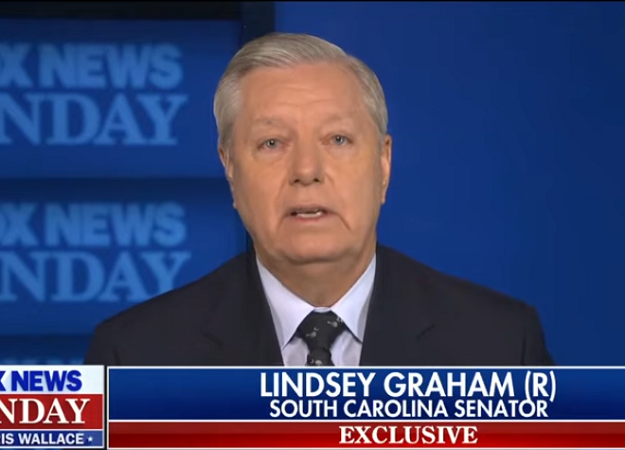 Okay, so the joke is on me. Yes, I really thought that Sen. Lindsey Graham had broken free from the RINO McCain sphere of influence and wrangled himself a new (kind of badass for a Southern gentleman) image.

He seemed to get it. Remember this?

Graham destroyed whatever goodwill he may have built among the Republican base by gloating about the generous pork he is bringing home from the Biden “infrastructure” bill and all the pork that other sell-out Republicans are bringing home to the constituents they think care more about pork buy-outs than the future of our Republic.

Can anyone be more clueless, less in touch with the GOP base than Lindsey Graham at this moment in time? I think not.

Graham is acting like nothing we ever said matters, like our electing Trump didn’t matter, like he can just sail back to his pre-Trump and anti-American Swamp Thing perch. From that perch, he may keep his standing, but forfeits his soul. Apparently happily.

Lindsay Where’s a Commie With Whom I Can Snuggle? Grahamnesty, simply doesn’t care that we, the people, have zero interest in dragging the GOP back to its pre-Trump elitist big taxing, big pork, big government, big regulation, big spending ways. The very things over which Graham is preening over. It’s truly disgusting.

How dare Graham preen about his enthusiastic support for the absolutely horrendous, pork-stuffed, swamp-stinking, job killing “infrastructure” bill? How dare Graham ignore the tens of millions of Trump supporters who reject this bill on its anti- and un-American merits?

He dares because he truly believes that Trump was an historical blip, that Trump voters will just toe the GOP voter-despised establishment line, and that Graham’s anti-American silence in the face of the sitting president’s willfully unconstitional evictions activity will be ignored.

Graham has destroyed whatever good will he had among the base of the Republican party. Frankly, this makes me sad. I loved fiery Graham, I loved that moment in time when he seemed to “get” it, but I am the first to admit I was duped.

As it’s turned out, he’s just another swampthing, embracing Democrats who would just as soon shank him. It’s a shame, but it is what it is.

Meanwhile, Ted Cruz gets it.

This $1.2 trillion infrastructure bill is a trap!

It’s just another avenue for the Democrats to raise taxes and raise spending.pic.twitter.com/rQQeXMjcfY

If you bought into Lindsey 2.0 as anything more than just a career politician sticking a finger into the wind, you were the sucker. If you thought he had changed based on multiple appearances on Hannity, you haven’t been paying attention to the last 4 years.

We bought it for about a half hour. But we figured it out long ago.

The bigger problem is that rat McConnell.

As much as I dislike Mitch, he did keep Garland off the court, for now. Problem is he could do more damage as AG than he ever could as one of nine.

Grahamnesty has ALWAYS been a disgusting RINO that has never, EVER lifted a finger to advance an actual conservative cause unless he was personally benefiting.

I warned people repeatedly over the last couple years that he was full of shit and just talking tough and running out the clock.

Remind me again how many subpoenas you issued when you were in charge of the Judiciary, you RINO trash?

Maybe in Grahamnesty 3.0, they will include some gonads. He is a pusillanimous putzhead.

I have been telling people for years to not trust linseed. he’s as slimy of a politician as they can get. he does absolutely nothing that does not assist his power, “prestige”, or wealth. Unless, of course, it’s to screw over America.

“Okay, so the joke is on me. Yes, I really thought that Sen. Lindsey Graham had broken free”

I think Cruz would be a great candidate in 2024. He was in the final two in 2016, which were my top two also. Either one would have been good. Trump will be 78.

If DJT doesn’t run then you prefer Cruz over DeSantis? Your opinion is in the minority in r circles at the moment.

I prefer Trump, assuming he is up to doing the job. Maybe Cruz or DeSantis could be VP?

Cruz will NEVER be POTUS. Never mind that he always looks like he just sniffed a big stinking fart, he just doesn’t have the political instincts nor the charm or charisma. And he certainly would again have to beg special interests for money. It’s great when he takes down a POS like Grahamnesty but then in his next breath, he trashes Trump, the hands down leader of the GOP and the one guy he absolutely cannot cross.

Cruz has nothing to show for his time in the Senate other than stunts. Same with Rand Paul. They are both one-man parties unto themselves. That is NOT how you become the leader of your party. They should leave the Senate and try being governors.

If Trump chooses to run in 2024 after leading the charge in 2022, we could have another 4 years of Trump followed by 8 years of DeSantis. DeSantis would be a fool to not seize on that and he has been very diligent making it clear that he is leaving that decision to Trump. Another 6 years as FL governor would make him untouchable after Trump has cleared the decks of UniParty scoundrels (which DeSantis cannot do). Besides, Trump may just succeed in clearing the decks next year giving him the option to declare mission accomplished and make way for DeSantis (my favorite option).

This is what did it? No offense but this is a continuation of his existing pattern. Not just him but many SR r legislators and party members as well.

Personally I have more respect for Susan Collins. She doesn’t raise expectations and then disappoint. We know Collins will not be there for every vote and she doesn’t hide that fact.

IMO, we need to use our r State primary elections to select the most conservative person who can be elected in that State/District. Once in office if they fail then vote for their primary challenger.

Same for Graham. Anyone who believes he is the most conservative person South Carolina can elect is being dishonest. Graham is making a political calculation that his voters want ‘things’ from legislation rather than simply oppose the legislation.

The repubs need to turn over their leadership team in the Senate, the days of McConnell, Grassley, Graham have passed. I would love to see somebody like Kennedy run the Senate.
Fiscal hawks like Paul and Lee need a bigger role.
The repubs have a chance to turnover seats due to senators retiring, they don’t need a new crop of weak RINO’s as replacements. They need five strong voices running for those seats and find others to challenge vulnerable dems in other senate races especially in states like Arizona, Georgia and New Hampshire. Murkowski may be primaried out of office as well.

Lindsay Graham has always been a sell out. The reason he endorsed Sonia Sotomayor for the Supreme Court during the Obama administration was so Obama would back a bill Graham was going to push for that would add .50 cents per gallon to the Federal gasoline tax. Graham voted to confirm, she was sworn in and Obama double crossed him.

Do you actually believe that we have an honest enough electoral system to overthrow the GOPe/Democrat combination? Really?

We are entering foreign territory.

What is more frightening than Lindsay Graham are the voters in SC that continue to elect him.

When you’re up to your ass in alligators it’s hard to remind yourself that you came there to drain the swamp.

Tucker Carlson named 17 RINOs who voted in favor of this boondoggle. See:
https://www.bizpacreview.com/2021/08/07/tucker-names-and-shames-the-17-spineless-republicans-who-voted-for-infrastructure-bill-1115157/

(I think I saw the included video on BitChute, not on YouTube.)

For your edification, here are those names from the article:
He then listed the names of the GOP senators who are supporting the bill:

I am bitterly disappointed. These guys are like the steers making compromise deals with meat-packers. (Analogy from Robert Heinlein’s “The Puppet Masters”, an analogy looking more real as this administration pulls us headlong into disaster.)

The scariest item he discussed was the inclusion of a a requirement for all car manufacturers to add a tracking device to the cars, purportedly to tax the act of driving. BULLS**T! I have always mocked paranoid conspiracy theories but this means the government gets an easy way to find out where anyone is. I can turn off my cell phone and put my EZ-Pass tag in foil (also means of tracking everyone) but this crosses a line.

I suspect there will be a cottage industry of mechanics who will, for a fee, disable or remove the device.

Why is no one filibustering this Bill???

Graham is like an analog clock without a battery. He is never right more than twice a day.
Two minutes a day is 0.138889% of the time.

I just call them Swamp Whores! Utter pieces of crap. A whore will sell their Own body, but these jerks are selling the whole country down the river.