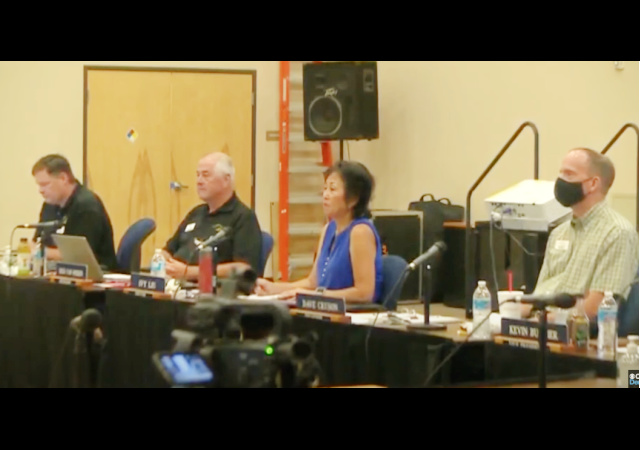 Thursday night, nearly all of the public comments focused on a resolution to ban CRT in District 49. Parents opposing teaching CRIT claimed it would divide students.

One parent who spoke claimed, “CRT indoctrinates our children into racism.”

A small minority defended CRT, saying that not allowing it to be taught is ignoring America’s history.

Others said the vote shouldn’t have taken place because the schools do not teach CRT. However, this ensures the schools will not instill it into the schools in the future:

Board member Cruson and Chief Operating Officer Pedro Almeida cautioned against the ban, saying it was unnecessary because the theory is not directly taught to students in the district.

“I feel that this is a solution to a problem that does not exist,” Almeida said.

Van Wieren agreed that the theory is probably not being taught in D-49 schools, and said the resolution should serve as the district’s final word on the topic.

“I would like this not to be something we have to talk about all year long,” Van Wieren said. “I would like us to get on with the business of teaching kids math, and science and history, and all that good stuff.”

Now they’re going to play the bullshit game of teaching ‘analytical race theory’ or some bullshit and claim it isn’t exactly the same thing.

“I feel that this is a solution to a problem that does not exist,” Almeida said.”

Did he lodge the same objection to the Undetectable Firearms Act of 1988?

Or the federal law on Exposure to Extraterrestrials of 1969?

A glimmer of sanity.

“I feel that this is a solution to a problem that does not exist,” Almeida said.

The gas lights are not flickering.

Woke teachers will teach it anyway. They will claim they didn’t know it was CRT. Good luck firing them.

Parents who want their children taught CRT should be invited to start their own school.

CRT is not taught as a standalone subject. Instead it is embedded into other subjects. Would this ban effect such teaching, especially since CRT activists will simply claim they’re embedding analytical race theory or critical thinking or some other euphemism?

Yep. It is a lens through which assignments/discussions are created/graded.

I bet the board doesn’t have tge stones to enforce it, anyways.

““I feel that this is a solution to a problem that does not exist,” Almeida said.”

Is Pedro Almeida the one in the picture wearing a mask? Another solution to another problem that doesn’t exist?