Colbert Says What the Left Thinks: Trump Supporters are Just Like the Taliban

Colbert Says What the Left Thinks: Trump Supporters are Just Like the Taliban

Glenn Greenwald: “They do believe the War on Terror should not end but be transferred to domestic politics, with Trump voters treated like Al Qaeda.” 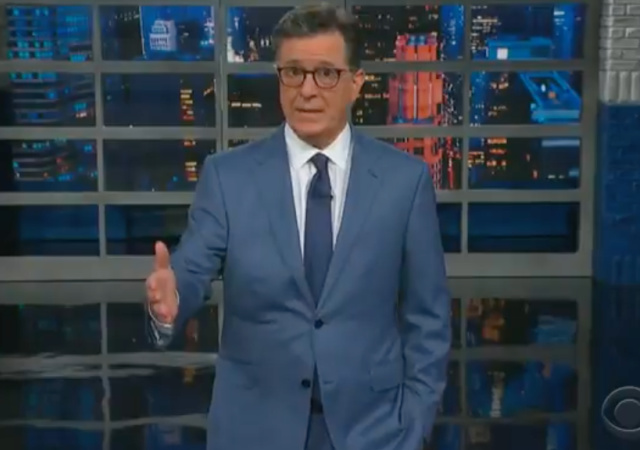 You can always count on so-called comedians to say out loud what the left thinks. They can get away with it because it’s a “joke” or something.

But we all know it is not a joke. They mean it.

Colbert meant it when he equates Trump supporters to the Taliban: “He’s right. We have had troops there for 20 years, they fought, they sacrificed, their families sacrificed, so that we wouldn’t have a terrorist attack planned in a foreign country. Why should our soldiers be fighting radicals in a Civil War in Afghanistan? We’ve got our own on Capitol Hill. Then Biden pointed out the U.S. did everything we could for the Afghans.”

Glenn Greenwald with the mic drop:

While Colbert's commentary, as usual, is just warmed-over Pelosi-speak with an invisible veneer of "comedy," it's also revealing about liberalism:

They do believe the War on Terror should not end but be transferred to domestic politics, with Trump voters treated like Al Qaeda. https://t.co/jJ9O3j1XJ5

Low IQ you might want to look at your thinking. Are you sure you’re telling yourself the truth?

Colbert is what passes for an intellectual among democrats.

Colbert is the Millennial Generation’s Lord Haw Haw.
He’s still broadcasting from behind enemy lines, it’s just that those lines are now domestic.

I’ve heard this before. Years ago. The fall of Afghanistan gives them an opportunity to amplify it. Again.

Colbert and his tribe are despicable.

If you treat a group like they are the enemy, eventually they will become the enemy.

Someday, Colbert and his cronies will be asking themselves, “Why do all those people hate us?”

So what? Colbert is consistently wrong.

Actually.. if one is accused of being the US equivalent of the Taliban… maybe acting like one should be the outcome! Make the action fit the name. They want a nightmare… give it to them good and hard.. and forever. They are actively doing the same to innocent people and those with only the least offenses in solitary. Bidenism flourishes.

Yeah, get your input from Colbert. Listen to his jokes and take them as a guide to your thinking. Discuss his ideas on facebook. Make a little shrine to him in your living room. Name your kids after him.

But don’t forget Oprah. She is still the leader of the freee world.

Low-information people do that.

Well, there’s a lot of them around. .

The right media do the same trick as the left however, it’s clicks over content. Different bait, same analysis.

I took Colbert as on the right in his original show. He’d do over the top rightist things but to bait the responders on the left. That read as a send-up of the left.

Everybody else seems to be taking it as mocking the right – but then what is the response from the left doing in the skit? It makes no sense under that interpretation, in addition to becoming unfunny from very funny.

You were duped. It was always meant to be a parody of the right. It was humorous, but we weren’t in on the joke. He was hiding behind that veneer mentioned above until his party of choice seized power and dominated the press.

Colbert is about as funny as a crutch. That’s sin one.

Sin two: he is.a blatant propagandist for evil. He’s as culpable as the evil-doers he shills for.

Can we send Colbert to Afghanistan ? Or Mars ?
Anyplace far from here.

Did this four-eyed moron seriously compare a pack of glorified LARPers to the Taliban?

He just is not funny.

What you just wrote is funnier than Colbert.

Now THAT is funny!

Why does anyone, left or right, consider Colbert funny? I’ve heard bits and pieces of his routines here and there over the years, and he isn’t just “No Johnny Carson” – he’s just not a comedian at all. He isn’t, and as far as I can tell, never has been funny. It’s the bit of truth in humor that makes it work. I guess there’s just no truth in his humor. At all.

This guy reached the Peter Principle as Mr. Goodwrench.

This a$$ hat is just trying to change narrative. Ignore him.

I do believe that this doofus once called Trump “Putin’s Cockholster”.

I suspect that there’s a bit of projection there on Colbert’s part–or at least he’s a wannabe cockholster.

And yet it’s the Democrats who are toppling statues, censoring non-fundamentalist opinions, sexually mutilating minors, and forcing people to be masked in public.

A MILLION times THIS!!

TheD’Rats, like Marxists and NAZIs, always accuse their opponents of being what they themselves are.

Don’t forget: McConnell is always at their meetings.

They hate you and want you dead or enslaved.

We have had troops there for 20 years, they fought, they sacrificed, their families sacrificed, so that we wouldn’t have a terrorist attack planned in a foreign country. Why should our soldiers be fighting radicals in a Civil War in Afghanistan? We’ve got our own on Capitol Hill.

Er….who just won the war in Afghanistan and cleaned your woke-and-broke clock, Skippy?

There is no ‘United States’ anymore. It just doesn’t exist in spirit, nor in practice.

Seccession is the way out.

USA was always united behind the concept of liberty. Protecting our liberty. Leaving a legacy of liberty for our children.

We have allowed evil-minded people to divide us.

lol. Of course the left resembles the Taliban a lot more than conservatives

Aren’t they scared they won’t be able to find enough personal security to remain safe from those 75 million plus terrorists?