Californians embrace gallows humor when it comes to discussing the state of their state. 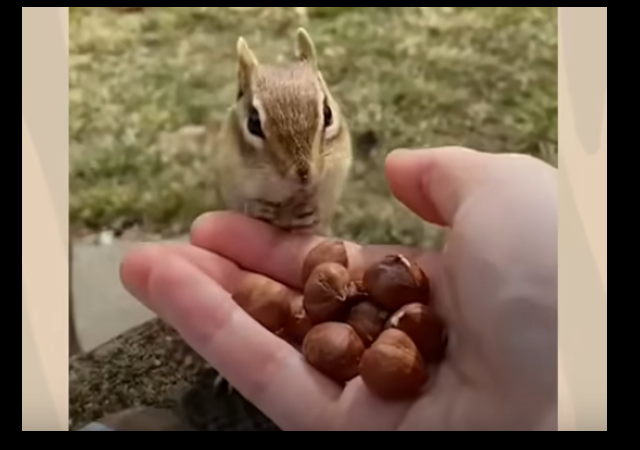 Chipmunks in the Lake Tahoe region of California have tested positive for the plague. Officials will close some sites in the area down for the next several days to address the rodent issue.

While the U.S. Forest Service (USFS) works to conduct vector control treatments to the impacted areas, The Tahoe Daily Tribune reported that the Taylor Creek Visitor Center, Kiva Beach and their parking areas will be off-limits to visitors through Friday.

The USFS expects the facilities to reopen by the weekend.

El Dorado County spokeswoman Carla Hass said that the chipmunks that were tested had no contact with any humans and the city’s public health services show that the plague is naturally present in some areas of the Golden State.

Officials are taking the opportunity to safety tips with those who want to camp and hike this summer, such as these from the Centers for Disease Control and Prevention.

I can only hope these are more effective than the tips for COVID-19 they have been offering.

Though the current situation is not a public health emergency, Californians have embraced gallows humor when discussing the condition of their state.

…. Last year an avid walker from the South Lake Tahoe region tested positive, becoming the first case in five years, according to a story in the Tahoe Daily Tribune.

[Lisa Herron, a public affairs specialist for the agency’s Lake Tahoe basin management unit] said if caught in time, plague in humans was now actually very treatable. Symptoms to watch for include sudden fever and chills, headache and muscle aches.

Local readers of the announcement seemed to take the closures in stride.

“Drought, plague, fires, and earthquakes. Just another week in California,” said one poster, responding to the forest service’s announcement on Facebook.

Interestingly, Plague was first introduced into the United States in 1900 by rat-infested steamships sailed from affected areas, mainly from Asia. The original outbreak in the Chinatown area of San Francisco drew the following response:

Chinatown leaders denied the reports of plague—and, fearful of an epidemic’s economic repercussions, so did others in power. Mayor James D. Phelan sent telegrams to the mayors of dozens of other cities, assuring them that San Francisco had seen just a single, isolated case—nothing more. Governor Henry Gage told reporters that Kinyoun had caused San Francisco’s cases himself, by letting the plague germ escape his lab. Gage even proposed making it a felony for newspapers to publish “false” reports on the presence of plague in the state.

They all had good reason for the denials. Kinyoun was urging for a naval quarantine to keep ships from entering or leaving the city’s ports, as well as mandatory health passes for any San Franciscans who wanted to leave the city by sea or land. Neighboring states threatened to block travelers and goods coming out of California. Admitting to plague would devastate tourism and trade, wrote Marilyn Chase in Barbary Plague: The Black Death in Victorian San Francisco. “No one wanted to see the yellow flag of pestilence flying over the portal to the Golden Gate.”

The last outbreak in a significant city occurred in 1924 in the Los Angeles area. Since then, the bubonic plague has been confined to rural areas and primarily impacted wildlife. However, with the surge in homeless camps throughout the state, it is probably only a matter of time before it returns to the urban jungles that our cities have become.

If you look for trouble, look everywhere, you will find it.
Life is fatal.

Mosquitos with Zika.
Chipmunks with plague.
Cows with guns.

Humans give us nut nut.

We give them plague plague.

I can remember when I was a kid, Fallen Leaf Lake was closed due to plague. It’s a recurring problem apparently.

Back in the mid-’70s there was a mystery outbreak someplace in SoCal, several members of the same household. It made the international news. A friend of mine was taking the undergrad “Europe, 1000-1500” at TCD that year, and she told me that the prof read the description and told the class “They’ve got plague.” A few days later it was announced that they did indeed have plague, flea bites from raccoons living in the chimney.

Kind of sad that a history professor in Ireland was able to diagnose it from the papers before their doctors did.

But yes, the stuff in the US is still very sensitive to antibiotics, unlike the version wandering around Madagascar. You just don’t want it to get to the septicemic form, which has a 99.99% fatality rate untreated and you only have hours to start treatment.

There oughta be a law…!

My older brother was quarantined at Philmont Scout Ranch in New Mexico back in 1969 because of Ground Squirrels with Bubonic Plague.

A good book on the San Francisco plague is: “Black Death at the Golden Gate: The Race to Save America from the Bubonic Plague” https://smile.amazon.com/Black-Death-Golden-Gate-America/dp/0393358151

Pictures of cute little chipmunks and bunnies is all it takes to persuade Americans to surrender their God-given rights without a whimper. Well, take a look at what the French are doing:

I swear, we can keep mocking the French and we Californians but right now, we Americans are proving to be the lamest of the lame. When are we going to at least stop wearing our masks? When are WE going to storm the streets in the millions like French are doing? We are NOT “the greatest generation”. Rightn now, we suck!

Hell, more than half our population thinks medical tyranny is a good thing.

The alleged Greatest Generation re-elected Johnson, gave us Nixon, and were a very big chunk of Carter’s votes.

On the plus side, chipmunks are very easy to tame.

And cats love to eat them. That is why we had cats as pets when I was young.

Thank goodness for that. If I have to hear those songs again…!

Now Chip & Dale are being blamed?

So, California politicians have always been incompetent when dealing with disease?

Sounds like Dave will be getting an unwanted visit from the authorities.
“ALVIN”

I love how California actually closes stuff down when they find plague infested rodents. So far this summer, it’s been identified in 6 Colorado counties. It’s also all over the northern half of New Mexico but generally confines itself to wiping out Prairie Dog colonies. This really dismays the activist types who move to Santa Fe and decide to take on Prairie Dogs as their cause. They just don’t understand why some of us would rather not see a colony pop up in highly populated areas.

Better prairie dogs than mountain lions. My aunt lives in Colorado, and has had to deal with neighbors who feed the things.

When the neighbors stop feeding them, they are for more than they bargained for.

Plague has been endemic in the Rocky Mountains for many years. In the 1970’s, we had an entire research group at Colo State who studied the prevalence of plague among rodents in the mountains.

In most areas of the Rocky Mountains, they found that about 15-20% of the chipmunks and ground squirrels were plague carriers. People don’t generally get plague from them because the fleas don’t like hairless animals and they say on the rodents.

But when there’s a die-off in the rodents, the fleas are starving, and they will find a meal anywhere they can get it. That’s when humans become infected.