Communist Party of China cannot dictate its way out of clusters, outbreaks, and cases.

For quite some time, I have questioned the accuracy of the reports regarding the number of coronavirus cases in China. 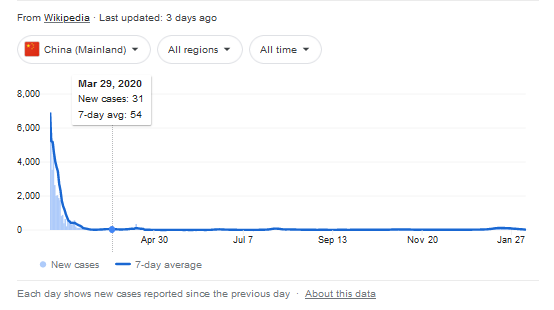 However, the delta variant of the pathogen likely bioengineered in their Wuhan laboratories is so infectious that the Chinese Communist Party has allowed reports of a surge in the number of cases.

Clusters of COVID-19 cases have emerged in several cities in China after months of no official reports of outbreaks.

Many of the cases are being traced to visitors to a live show held in Hunan Province last week and an airport in Nanjing.

Domestic tourists who visited Zhangjiajie National Forest Park in Hunan tested positive for the Delta variant of the novel coronavirus in different parts of the country after leaving the province, China Central Television reported.

China is now on “high alert.”

Officials in Nanjing are now on “high alert” and plan to test all the city’s residents, having already got through 1.9 million people in one day, the Xinhua news agency reported Thursday.

After the initial Covid outbreak, which was first recorded in Wuhan in December 2019, China’s flare-ups have been relatively minor by international standards and in the context of China’s 1.4 billion population.

The indications are that it is the worst series of outbreaks since the original ones in Wuhan.

A Covid outbreak first discovered in the Chinese city of Nanjing has spread to five provinces and Beijing, with state media calling it the most extensive contagion after Wuhan.

Almost 200 people have been infected since the virus was first detected at the city’s busy airport on 20 July.

All flights from Nanjing airport will be suspended until 11 August, according to local media.

Officials also began city-wide testing amid criticism for their “failure”.

All 9.3 million of the city’s residents – including those visiting – will be tested, said state-controlled Xinhua news.

China, and any country attempting to take the “zero tolerance” approach, is doomed to failure. The virus, explicitly adapted to the human respiratory system, now must be considered ubiquitous. Everyone will at some point get exposed to, and likely be infected with, the SARS-Cov-2 virus. There is no “crushing” this pathogen. We can only assess personal risk factors and decide about vaccinations and health matters that promote mild symptoms and swift recoveries.

The moment any “zero tolerance” nation opens up, it will begin experiencing cases. As this reality sets in, China is starting to rethink its approach to the virus.

China’s commitment to a zero-tolerance approach for coronavirus infections may be starting to fray.

Since the start of the pandemic, China has embraced a stringent approach to containing the coronavirus, sealing off entire cities and tightly controlling borders to keep infection rates down.

Officials borrowed from the same playbook when a cluster of cases recently emerged in the eastern city of Nanjing, placing 9.3 million residents in semi-lockdown. Nearly all in-person commercial and social activity was suspended and neighborhoods considered high-risk were cordoned off. Taxis were told not to leave the city, and residents were subject to mass testing.

But as coronavirus cases continued to pop up this week in other cities as a result of the highly contagious delta variant, driving new infections in China to a six-month high, some experts have suggested the need for a shift in strategy.

“The Nanjing outbreak has prompted a national stress test and serves as food for thought for the future of our pandemic response,” said Zhang Wenhong, an infectious-disease specialist often regarded as China’s Anthony S. Fauci, in a statement Thursday.

I am experiencing a great deal of schadenfreude over this news. China’s biological antics resulted in a lot of personal heartache and professional challenges with my family. The same is true for families around the US and the globe.

The fact that the Communist Party of China cannot dictate its way out of clusters, outbreaks, and cases is, indeed, satisfying. I can’t wait to see how it blames the US for these recent developments.

That being said, I must add a note of caution. We do have no idea the extent of the coronavirus impact on China, nor are we ever likely to see that data. These “reports” could also be a stunt to help drive panic pandemic reporting in the West.

Do not take any ‘news’ coming out of Communist China at face value. Especially about Covid. They cannot be trusted.

All ‘news’ there is carefully controlled, edited, and orchestrated to advance the political objectives, plans, and goals of the Communist Party ruling class.

Think of how the Dem-media ‘news’ complex operates here. Now imagine it on steroids. With direct government censorship instead of the indirect kind we have here. Under the threat of government agents showing up at your door and hauling you away because you are suspected of spreading ‘misinformation’ or ‘lies’ that harm the state.

BTW, this is what the Dems have planned for America. If they can, by whatever means necessary, establish one-party rule.

My 1st thought was that China is just trying to fuel more hysteria in the West.

These “reports” could also be a stunt to help drive panic pandemic reporting in the West.

Odds are that would be a good bet. That’s the bet I’d make if I were forced to bet money on it.

I believe literally nothing that comes out of China.

And why should anyone believe what comes out of China. Considering the crackdown and continued denials that the CCP has made over the Wuhan virus it seems pretty odd to me that they’d be willing to release any information that the virus or its variants is spreading unchecked in the country.

So they don’t have any tests to accurately test for Covid but they are able to identify variants of Covid….seems sciencey to me

If you follow the symptoms in the UK, the Delta Variant is more infectious than COVID-19 but even less deadly, and it really does resemble the common cold.

The story doesn’t say how the “Delta Variant” is identified, and if it’s the PCR test, we cannot tell the difference.

Fortunately, zinc plus an ionophore should work just fine on a cold, too.

Valerie: If you follow the symptoms in the UK, the Delta Variant is more infectious than COVID-19 but even less deadly, and it really does resemble the common cold.

It’s still early days, but Delta is associated with higher hospitalizations for the unvaccinated than Alpha.

“Risk of COVID-19 hospital admission was approximately doubled in those with the Delta VOC when compared to the Alpha VOC”
https://www.thelancet.com/journals/lancet/article/PIIS0140-6736(21)01358-1/fulltext

So the Delta Variant (aka “common cold”) is taking China down? This is what finally stopped the Martians when they invaded us in 1938.

It seems that the only evidence that a “Delta variant” exits is a set of claims by a set of liars. Perhaps this surge in illness is fallout from the “vaccine” but that would need serious coverup.

TX-rifraph: It seems that the only evidence that a “Delta variant” exits is a set of claims by a set of liars.

Gene sequencing allows scientists to watch the evolution of the virus in real time. Delta spreads faster and replicates faster. Mass vaccination remains the key to controlling the pandemic.

I can never remember the “science.”

Was is it the common cold, or “Una Paloma Blanca.”

I was expecting to hear that he went to a party in Provincetown.

Did China run out of rapevans to throw “suspected infected” subjects in? That was their solution to the first wave.

They’re going bats over it.
.

Delta is the India variant, and it evolved to overcome the hot humid conditions of India that impede spread. Next up is probably an Africa variant. Right now both Delta and Alpha with about 10 extra mutations than the rest of world has are spreading in Africa. Something is clearly evolving there, and the next major variant will probably be better at spreading than Delta.

“Delta is the India variant…”

My understanding there is no legitimate test based on standard test protocols that can identify this or any other variant. That the flu or the common cold can be labeled as COVID-19 with no capability for anybody to confirm or disprove the label. That sounds a lot like MSU (Making S___ Up). Monetary incentives corrupt–always. That is their purpose–always. This “pandemic” is flooded with money intended to manipulate.