“Video taken this week by a source in the Rio Grande Valley Sector shows immigrants in a holding facility packed in tightly, with some not wearing masks.” 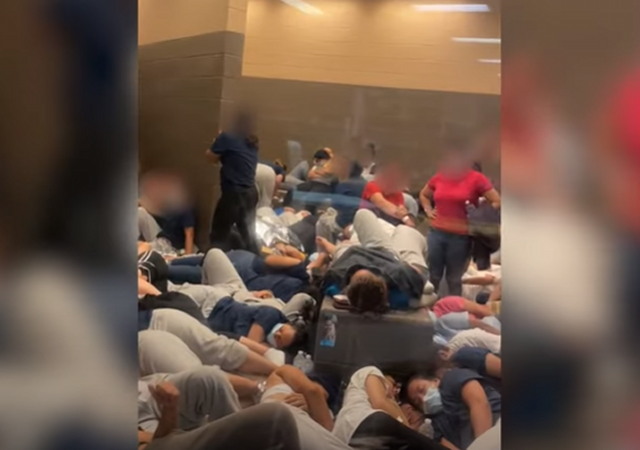 Border patrol agents are frustrated with the situation at the southern border. They posted images of a facility packed with people almost lying on top of each other.

How does the Biden administration think it has any credibility on the dangers of COVID when we can see how they’re handling the border?

The Biden administration’s handling of the ongoing crisis at the U.S.-Mexico border continues to flounder as the massive influx of people illegally crossing into the U.S. remains at an all-time high, leading to overcrowding at holding facilities with COVID-19 still being an issue.

Video taken this week by a source in the Rio Grande Valley Sector shows immigrants in a holding facility packed in tightly, with some not wearing masks. This has lead to Border Patrol having to take people apprehended elsewhere in the sector to the temporary holding site underneath the Anzalduas International Bridge in Mission, Texas, where outside temperatures reach above 100 degrees on a daily basis.

“They are way past capacity – so aliens sit outside because where do you take them? Logistically it’s a nightmare – people want to go to the bathroom, need to eat, women need to breastfeed, and the list goes on…This has surpassed the point of sustainability – this is lunacy,” the source said.

Where is the media? Where’s crying AOC?

No hashtags. No crying at fence-lines. No Jim Acosta at the wall. No twitter trends. Nothing. https://t.co/Qe74cWK4y2

🚨🚨: Source sends new photos from the Rio Grande Valley sector, showing dozens of illegal aliens on top of each other, including massive groups of what appear to be unaccompanied minors.

It’s hard to overstate what a complete disaster the Biden response to this crisis has been. First off, the administration is directly responsible for creating it despite warnings this would happen. Then when the numbers started to spike in March, Biden latched on to some very dubious claims present by immigration experts affiliated with the Center for American Progress. Biden himself repeated claims that the migration was just seasonal, suggesting it would drop off as the weather got warmer. Obviously that hasn’t happened.

The Democrats and cable news hosts who shrieked about this under Trump are nowhere to be found. It’s because they never really cared. They only used the issue as a political hammer.

Now many of the same people have turned their attention to COVID. How are we supposed to take them seriously on that issue when they have nothing to say about what’s happening at the border?

Well a continuation of Trumps policy on immigration doesn’t seem to be working.

Achshuallly…..
Its directly due to NOT following existing laws and regulations and a series of absolute America destroying(by design) EO’s signed by the Dementia patient in chief, Joeseph Stolen….but you you knew that….

Nope title 42 is still being enforced, with reference to the 100 day suspension of deportations that was blocked by the courts, and the number of detentions is considerably higher than during the Trump administration’s. It’s also the case that Trump failed to build much of a wall so no difference there either.

So what EO’s are you thinking of? Or indeed existing laws given we know for a fact that the detention centres are over following with immigrants. That’s implies that the administration is detaining people.

Yeah claiming Joe is senile is pretty stupid, compare him to Trump and he looks positively intellectual.

Would you like the list of actual policies, laws ignored and statements that actual experts and Border Patrol cite as the absolute direct cause for this deliberate hot mess the Dementia Administration has done and stated and engaged in ….I mean it’s longer than a bumper sticker saying so probably too much for you…..not to mention actual facts so thats a problem for a leftist too. Any chance of you ever getting tired of butt kissing Dementia Joe’s feces stained rear?

Here’s a tiny start dillweed bc you are too lazy or slow to spend 5 seconds doing a google search…its from Real Clear Politics/MSN….huge dementia Joe cheerleaders so perhaps even someone like you will believe. There are 2 more dozen policies and law ignoring things he is doing but since you are so busy giving Slo Joe a hinney tongue bath I doubt you REALLY care

Thanks for the links dealing with each in turn

The wall:
There were numerous stories on how ineffective it was and Trump only built a short section. Not exactly a great policy given practically day one people just took a ladder, some common power tools and jumped over.

That’s fair, there was a considerable difference in rhetoric. That doesn’t really explain the mass detentions, horrible conditions still attributed to conditions in those centres. The facts on the ground are pretty grim in my view.

Remain in Mexico While Seeking Asylum in the U.S.:

This has more nuance than on first inspection. Firstly the policy itself has been challenged in court as being illegal, and some sources suggest that it is. Secondly from a due process perspective it’s absolutely right and proper that immigrants are processed in house so to speak when you are talking about those of a refugee status running from persecution.

Refuse Entry Because of Communicable Diseases:

This is framed as being a hypothetical. As in it presupposes the end of title 42 which hasn’t happened

Sure I’ll give you that one, I’m not clear that it’s really an issue since this form of immigration is pro business, as in talent migrates to the US. That’s just a return to the normal functioning of the global economy

Prohibition on Entry From Some Countries, aka ‘Muslim Travel Ban’

The article states there aren’t any issues with ending this policy.

I’m grateful for the link, always happy to discuss specific points. It’s much more valuable to have an honest discussion, the article had some interesting points, I’ll revise to my claim to be the substantive policy is the same ie title 42. I’m not clear the wall is really a policy of worth just an expensive mistake

It’s good practice for living 8 to a room.

Choices have consequences. The Biden administration made a series of deliberate decisions that set the conditions to enable the outcome. The people who voted for Biden and d/progressive HoR and Senate supported the policy preferences that created and sustain the situation.

Most knew what the outcome would be and wanted this situation. Some were misled by emotional appeals and had good intentions but didn’t fully realize the extent of the situation that would be created.

The question is will those who allowed themselves to be mislead be sufficiently upset to change their minds? This question holds for nearly every policy decision of the Biden Admin; rampant inflation, loss of liberty for Rona, CRT/Equity.

How many of the mislead will realize their error and change course? How many of the ‘I don’t like DJT mean tweets so I voted for Biden or stayed home’ Brigade will accept responsibility for the outcome, reflect and change their voting habits? Some for sure. Enough to preclude a repeat? Maybe; we find out in Nov 2022.

Are we doing enough in our communities to help make a difference? Be honest with yourself; have you done everything you could or only that which is convenient and easy?

No white knight is going to rescue our communities. It’s up to each of us to commit to doing the hard work of organization, funding, campaigning and electing candidates that reflect our policy preferences.

If you refuse to accept that then you are taking on the role of a damsel in distress in a fairy tale. Don’t delude yourself that someone is coming to save us. We must be willing to do what it takes to save ourselves. Stop blaming anyone else for these poor outcomes if you haven’t done everything possible in your own community to avert that.

All those new Democratic voters.

Just keep posting new photos of the squalor with: BLOOD ON YOUR HANDS. Over and over.

Awaiting anxiously for the Dept. Of Homeland Security to ban all cell phones from the holding pens at the immigrant concentration camps. Can’t have these horrible, heinous pictures leaking out gainsaying the Biden regime’s claims they’ve got everything under control.

“with some not wearing masks”

Which is irrelevant, since masks still don’t work. Endless repeating it doesn’t increase its truth value.

As I remember, Kamala Harris is supposed to be managing the border for Biden. I wonder why the mainstream media haven’t asked her about these photos. They are simply protecting Harris and Sleepy Joe.

My question is why the right has challenged virtually no EO’s, unconstitutional power grabs, and harmful regulations put out by the Biden administration. When Trump was in office every single thing he did was challenged in court and stopped within 24 hours…and if they lost they just kept trying. Now we have Biden who actually should be stopped and who is doing actual illegal actions…nothing…well maybe 2 cases that will take years ….how did the left stop everything within hours