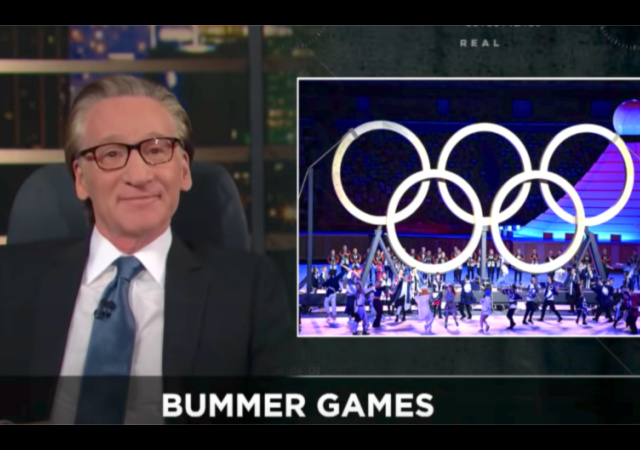 HBO host Bill Maher slammed cancel culture on his show this past weekend.

Maher brought up cancel culture due to Olympic officials losing their jobs “for offensive jokes.”

The majority of the offensive jokes happened years, some decades, before the Tokyo Olympics.

Thanks, Maher, for reminding people that thinking cancel culture exists is not a conservative position:

Remember when your teacher used to try to scare you, they’d say, ‘You know, this is going to go down on your permanent record?’ No longer an empty threat now. This is called a purge. It’s a mentality that belongs in Stalin’s Russia. How bad does this atmosphere we are living in have to get before people who say cancel culture is overblown admit that it is, in fact, an insanity that is swallowing up the world?

That is not a conservative position, my friends. My politics have not changed. But I am reacting to politics that have. And this is yet another example of how the woke invert the very thing that used to make the liberals liberal. Snitches and bitches? That’s not being liberal. The Associated Press is a real news organization, yeah? So why am I reading this headline: ‘Olympic surfing exposes whitewashed Native Hawaiian Roots.’ Yeah, the Olympics added surfing this year. Good. Surfers deserve to be recognized as athletes. I’m sorry, what I meant to say is no, that’s cultural appropriation…

I wonder if Maher will get canceled for going after those who hate cultural appropriation:

I must say of all the violations of the woke penal code, cultural appropriation just might be the dumbest of all. First of all, there are 25,000 islands in the Pacific. How do we know a Hawaiian was the first to stand on a board in the water? It seems like something anyone in any ocean would eventually get around to. And if you’re a surfer, it doesn’t matter if you’re black, white, or in between you all taste the same to sharks…

Change is not synonymous with progress. Newer doesn’t automatically mean better. This new idea that each culture must remain in its own separate silo is not better, and it’s not progress. And in fact, it’s messing with one of the few ideas that still really does make this melting pot called America great. Not everything is about oppression, stealing natural resources from indigenous people.

It sounded like not all of Maher’s audience were entirely “with him”.

” This is called a purge. It’s a mentality that belongs in Stalin’s Russia.”
As do those promoting this. They should be canceled, one way or another..

The Biden Administration declared libertarians as a major threat (Homeland is focused on them, along with right wing conservatives). Maher is aware of this fact and is acting accordingly.

Just because Maher once made the ridiculous statement that he was a libertarian doesn’t mean we have to ignore decades of evidence and believe him.

My first thought when I considered it was Maher making this speech was of the little Suthrun gal in the Shake & Bake commercial: “And Ah Hayulped!”

The comedians will be the first to burst the bubble.

Comedy is often little more than a comment on the absurd in society..

During Trump – comedy died because it was weaponized / politicized to go after Trump.

Now comedians are starting to realize that they were complicit in the woke mess because they withheld comments on madness of the left. Comedy works best when it is an equal opportunity offender. Otherwise your just a political hack.

The Jester is only valuable if he can insult the rulers. Otherwise he is just another yes man and there is no one to point out when the ruler is doing the wrong thing.

This must be the quarterly installment of “Blind Squirrel Finds Nut” for Maher.

He said something worthwhile last week, too. I suppose he’s really getting hot, for him.

A stopped clock is right one to three times a day, with daylight savings time changes.

Maher can go to hell, and conservatives REALLY need to stop quoting him and acting like he’s taking some kind of stand.

He is NOT on our side, and deserves nothing but ridicule and scorn from us.

You made this bed, Maher.

Big surprise. Most of the left seems rather fond of a rebirth of Stalin’s Russia.

Well, yeah. I’d say about 99% of us on our side of things already long ago saw and knew that. He’s welcome to the party late, but he doesn’t really deserve any credit for being deep or bold.

I think it detected more than one moment when Maher’s face betrayed feelings of contempt for his audience–particularly when they clapped at the point he mentioned Olympic officials being cancelled and he had to tell them he was being sarcastic.

I must say of all the violations of the woke penal code, cultural appropriation just might be the dumbest of all.

You’d think so. You’d think nobody could possibly come up with a dumber idea. But “pinkwashing” is even dumber than that, by a wide margin.

I rarely agree with Maher, never on politics, but he has been right quite a bit lately about cancel culture, the disease that is woke-ism and the relentless march toward lawlessness being thrust upon us by the radical progressives that have taken control of the Democrat party. It’s nice to hear someone from the left demonstrate some common sense and logic.

Unfortunately for Maher, logic requires consistency, and he hasn’t mastered that yet.

Ah that feeling when the beast has devoured your enemies and turns to look at you.

Getting a little nervous Bill? I can assure you his recent statements have a lot more to do with self preservation than an unexpected flash of moral and intellectual clarity.