“Taliban leaders paraded at Kabul airport alongside troops decked out head to toe in western gear.” 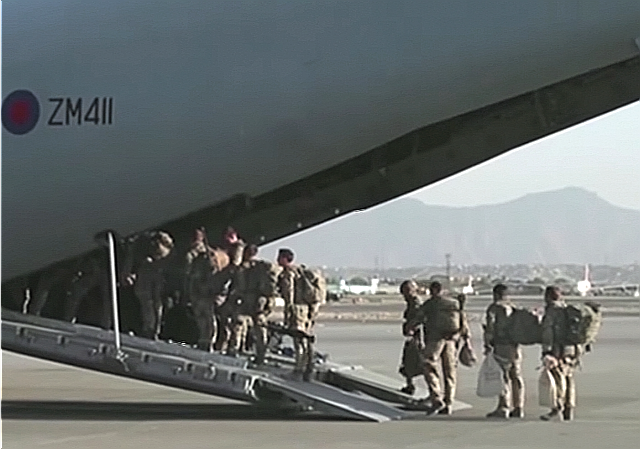 As the last U.S. soldiers boarded a C-130 transport plane at Kabul airport on Monday, Taliban fighters rushed to the tarmac and declared victory nearly 20 years after the September 11 terrorist attacks.

News reports said that Taliban gunmen screamed “Allahu akbar” and fired shots into the air as the last U.S. planes left the airport. Taliban and its supporters took to the streets of Kabul to celebrate a humiliating military withdrawal and airlift overseen by U.S. President Joe Biden.

The Taliban mocked U.S. and allied troops by parading fake coffins covered in their flags. “Fake coffins draped with the British, American, French and NATO flags were paraded through the streets of Khost in Afghanistan today as the Taliban celebrated the end of western ‘occupation’,” The UK’s Daily Mail reported.

Taliban fighters and their supporters rallied across Afghanistan to celebrate the end of 20 years of foreign military presence on Tuesday, pledging to implement strict Islamic rule as ordinary Afghans, many of them bewildered and scared, grappled with the uncertain future ahead. (…)

Senior figures in the Islamist movement posed in front of a C-130 transport plane at the Kabul airport, the hub of a chaotic U.S.-led evacuation operation in recent days. Fighters took selfies in the cockpits of Afghan military helicopters that had been disabled and abandoned.

“We hope that Afghanistan will not be invaded again, that it will be rebuilt, remain independent, and that a holy Islamic system will rule,” Taliban spokesman Zabiullah Mujahid said, as uniformed fighters in modern combat gear knelt on the tarmac and chanted “Allahu akbar,” or “God is great.”

Top al Qaeda operatives are coming out of hiding and filling the power vacuum as the U.S. withdrew from Afghanistan.

Amin-ul-Haq, Obama bin Laden’s security chief, was spotted in Afghanistan. “Amin-ul-Haq, a major al-Qaeda leader in Afghanistan, has returned to his native Nangarhar province after it fell to the Taliban,” New Delhi-based weekly India Today reported on Friday.

Al Qaeda-linked Haqqani Network has taken charge of security operations in Kabul. The Haqqani Network was responsible for the security around the Kabul airport when a suicide bombing killed 13 U.S. soldiers and 169 Afghans.

While ISIS took responsibility for the attack, the Haqqani Network has carried out such attacks. “The Haqqanis have a reputation for frequently using suicide bombers — including drivers in cars and trucks packed with huge amounts of explosives — and have demonstrated the ability to carry out complex, high-casualty assaults on major targets including military installations and embassies,” The Times of Israel reported before the Kabul blast.

While the White House is angry at the media for using the word “stranded” to describe Americans stuck in Afghanistan, hundreds of them could be stuck in the country as the evacuation ended. “The Pentagon says that some Americans who wanted to leave Afghanistan were unable to make it to the Kabul airport to board U.S. evacuation flights before the complete evacuation of U.S. forces,” the PBS confirmed on Monday.

This is in sharp contrast with assurances given by the Biden White House. Earlier this month, President Biden declared that his administration would get all Americans out of Afghanistan. “If there’s American citizens left, we’re going to stay until we get them all out,” he promised in an interview.

Most media outlets put the number of Americans left behind in Afghanistan at 200, but the Pentagon was unclear about the actual numbers.

The Associated Press reported on U.S. nationals stranded in Afghanistan:

As the final five U.S. military transport aircraft lifted off out of Afghanistan, they left behind up to 200 Americans and thousands of desperate Afghans who couldn’t get out and now must rely on the Taliban to allow their departure.

Secretary of State Antony Blinken said the U.S. will continue to try to get Americans and Afghans out of the country, and will work with Afghanistan’s neighbors to secure their departure either over land or by charter flight once the Kabul airport reopens.

“We have no illusion that any of this will be easy, or rapid,” said Blinken, adding that the total number of Americans who are in Afghanistan and still want to leave may be closer to 100.

STEPHANOPOULOS: Are you committed to making sure that the troops stay until every American who wants to be out is out?

BIDEN: Yes. … if there’s American citizens left, we’re going to stay until we get them all out.pic.twitter.com/OgOowoNIES

Fearing a repeat of the 2015 migrant crisis, European Union has pledged €600 million to Afghanistan’s neighboring countries to house refugees temporarily. The EU promised to accept these Afghan refugees once the validity of their claim is verified.

The bulk of the money could go to Iran and Pakistan, both known sponsors of international terrorism and jihad.

With the German general election just weeks away, Chancellor Angela Merkel is at the forefront of this initiative, hoping to avert a migrant wave before Germans head to polls.

“The German foreign minister, Heiko Maas, travelled to Turkey, Uzbekistan, Tajikistan, Pakistan and Qatar in an attempt to win the region’s cooperation and to reach understandings on processing refugees,” British newspaper The Guardian reported.

Brussels is drafting proposals for a €600m EU package for Afghanistan’s neighbours to accept refugees as it tries to avoid a repeat of the 2015 Syrian migrant crisis. (…)

EU officials said the proposal was to offer about €600m to neighbouring countries to help them host refugees fleeing the Taliban regime. It could mean Brussels providing cash to Pakistan, possibly to Uzbekistan and Tajikistan and even to Iran, which is under international sanctions. (…)

Home affairs ministers from the EU held an emergency meeting in Brussels on Tuesday to discuss the fallout from the change of power in Afghanistan. The last US soldiers flew out of Kabul on Monday evening, as Washington ended its 20-year war in the country.

In a statement at the outset of the meeting, the interior ministers of Austria, Denmark and the Czech Republic said “the most important thing right now is  to send the right message into the region: stay there and we will support the region to help the people.”

The Taliban did not win the war. The U.S. lost due to utter incompetence at the top.

The war ain’t over.

To be followed by real funerals for American citizens abandoned and left at the mercy of the Taliban, ISIS-K, and al-Qaeda by Joe Biden, sociopath.

Would a complete surrender look any different?