“He should resign. I understand the state legislature may decide to impeach, I do not know that for a fact.” 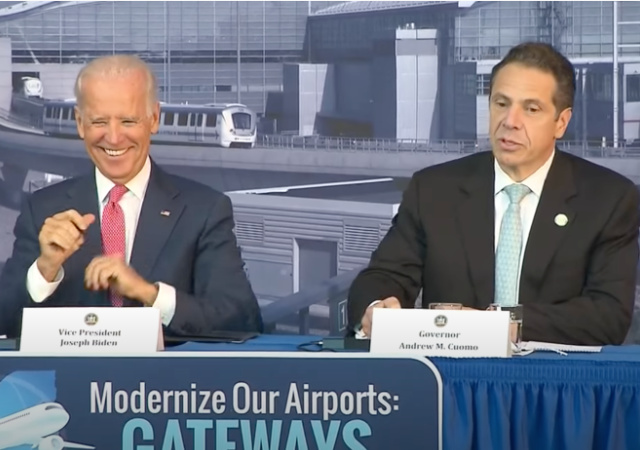 Reporter: "Are you now calling on [Governor Cuomo] to resign?"

Biden said, “He should resign. I understand the state legislature may decide to impeach, I do not know that for a fact.”

Biden told reporters he has not spoken to Cuomo.

The sexual harassment allegations against Cuomo surfaced in 2020. Biden said in March that Cuomo should resign if the investigation found the truth in those allegations.

Speaker of the House Nancy Pelosi said Cuomo should resign.

Their latest statement comes at the conclusion of an independent investigation, which found that Cuomo had a ‘pattern of sexual harassment’ that ‘violated federal and state law.’ Both senators had called for Cuomo’s resignation in March.

Biden has been accused of essentially the same thing as Cuomo – unwanted touching and advances. And a woman who used to work for Biden accused him of sexual assault. Biden also has made the same excuse as Cuomo – “hey, I’m a touchy-feely guy, but I don’t mean to offend anyone” Yeah, when women repeatedly tell you they are creeped out and don’t want your hands all over them — but you do it anyway. At least Cuomo kept his hands mostly on adults – Biden is know to get hands with kids and the hair-sniffing, what up with that?

Maybe Biden should take his own advice and resign today.

He’s no longer useful… they all knew who he was.

President Hair-Sniff, aka Badfinger needs to take a seat.

Leftist filth like Biden, Harris, etc. all repeat the boilerplate condemnations and whatnot. Cuomo rides out the storm and the agitprop media moves on.

Rinse and repeat for the next scumbag with the magic D next to his name.

Something to distract attention from the Loot America Bill?

Perhaps I am missing the point, but, so what if Cuomo resigns? Five years in a nasty jail would be appropriate.

He’s not going to resign.

He’s learned his lesson well from other Democrat scumbags in this exact situation.

Don’t resign, whine about Evil Trump and Evil Republicans, and call the Democrat bluff and wait for the news cycle to move on.

They aren’t going to remove him or prosecute him, so he has NOTHING to gain by resigning.

The Democrat playbook is so pathetically predictable I anticipate that by the end of the week they’re suddenly going to ‘discover’ alleged crimes by Trump and then they’ll never mention Cuomo’s crap again.

Didn’t we hear these calls for Cuomo to resign several months ago? And didn’t it suddenly go away after a few days?

Cuomo lost Sundowner? Time to give it up.

Maybe Chomo should of stick with children like Joe because no one is calling for his resignation. Andy will be alright once he settles in at his new job at CNN.

This is a distraction and it’s Cuomo’s and NY’s problem.

THIS is what our problem is going to be:

We’re not going to make it to the next election intact. Martial law is coming – get ready for it.

If he resigns, what is on deck?

He’s now become an unbearable weight around the necks of the national Democrat Party ’22 and ’24 hopefuls; he’s become expendable. If he does not resign, the NY state congress will impeach him. He knows this. He hasn’t resigned yet because he’s negotiating behind the scenes with the national party powers about how to split up all the corruption goodies and such, and in search of promises he’ll not face criminal charges when he resigns or is impeached.

Most of all, he’s waiting for CNN to build the sets and hire the staff for the new prime time show he’ll get out of this.

How many of his staff are going to quit in protest of him not resigning? continuing to work for him endorses an acceptance of his behavior.

This will be forgotten in a few days. Andrew is Sicilian. His response is full of pictures of other politicians hugging, etc.

Reminder: there are worse pictures available. Hunter and his dad.

Pedo Pervert Joe is one to talk.

Tens of thousands of cases of criminally negligent homicide – D’s are ok with that. But, he has to resign over #Metoo.