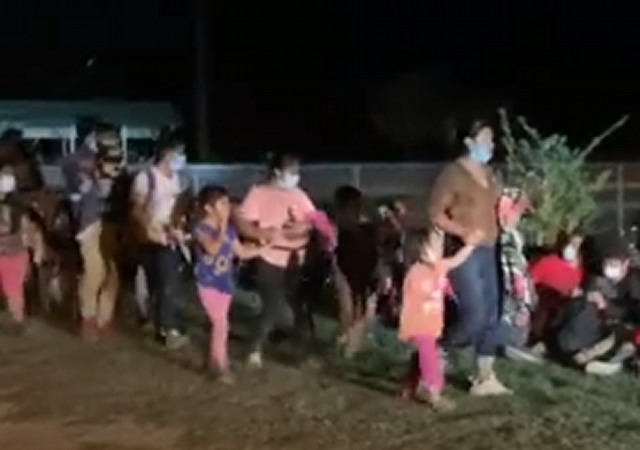 Political media has buzzed nonstop with stories about the new ‘delta’ variant of COVID. The Biden administration has started backtracking on freedom from face masks.

How are Americans supposed to believe the Biden administration is serious about the risks as thousands of potentially unvaccinated people come across our southern border every week?

The scene in La Joya, Texas, right now is surreal.

As President Biden, his CDC, and other officials in the administration continue to push for more restrictions in response to the Delta variant of the Wuhan coronavirus, they turn a blind eye to the growing public health threat posed by COVID-positive illegal immigrants.

Thanks to the Biden administration’s inaction to stop illegal border crossings, paired with its action to spread illegal immigrants across the country, there’s more than one surge endangering communities — especially those along the U.S.-Mexico border. In addition to out-of-control increases in illegal immigrants and contraband across the border, southwest states such as Texas are now seeing a surge in the South American Lamda variant of the Wuhan coronavirus in their communities. And it’s a problem those states could see coming as the Biden administration failed to take action…

Townhall’s Julio Rosas is again on the ground this week at the U.S.-Mexico border to report on the illegal immigration crisis, and what he’s seeing shows what the White House’s inaction has wrought.

Another night in La Joya, TX another large group of illegal immigrants turning themselves over to Border Patrol. There are well over 150 people here. There is also a lot of sneezing and coughing among the group. pic.twitter.com/cFkwdD8qnT

Can’t stress enough that I’ve never seen such a large group at one time who have as many individuals who appear/sound to be sick. pic.twitter.com/27FztNlJBa

Do Democrats think the American people are too stupid to connect these dots?

We don’t know how many illegal immigrants are infected or have been tested, but what is clear is that regardless of proven infections, those who are caught by the Border Patrol are quickly shuffled off to other U.S. towns and cities across the nation.

Contrast that with other Biden administration policies. For example, every U.S. citizen who visits another country is required to prove that they tested negative for the virus within 72 hours before their return flight. If they can’t present a negative test, they aren’t allowed to fly back.

The Biden administration maintains visa blockades against travelers from about three dozen countries, including most of Europe. DHS Secretary Alejandro Mayorkas has said no Cuban refugees will be admitted even if they come on small boats to Florida. (As I noted last week, the Cubans might become Republicans, which is reason enough for Mayorkas to prohibit their entry.)

But our border with Mexico is open to anyone from anywhere (except Cuba) whether or not they are infected with COVID. That is a greater danger to public health than anyone could imagine, far more significant than those who refuse to wear masks or get the vaccine.

Biden will continue to have a credibility problem on COVID and vaccines as long as the border is open.

Democrats can’t have this both ways.

This administration not only ignores the virus in illegal aliens, but they actively distribute these infected individuals all over the country as though they were seeding the country with infection. After understanding this, how can anyone take this administration, the fight against COVID, or the threat of COVID seriously?

It wouldn’t surprise me if they were assembling illegals under bridges to secretly administer covid tests and then only let in those who are positive.

Well, since they are using PCR tests, the results aren’t valid anyway.

Biden will open the border and Close down your Church.

It wouldn’t surprise me if alleged spikes in covid in Republican states is due to these covid-ridden illegals being deliberately bussed to those areas.

And on a totally different topic: Code Monkey is making some big claims about nailing down evidence of election fraud.

I will believe it when I see it, but here’s the place marker.

That right there tells you the Chinese Death Kooties has only ever been a political tool. Democrats go all hysterical about it in regards to American citizens BUT couldn’t give a flying fuck when it comes to illegal immigrants.

Gee whiz. This is not news. This is history.

I’m not convinced President Alzheimer even knows what’s going on.
.

The only thing he knows that is going on is what was said to him in the last 2 1/2 minutes.

The immigration issue relates to illegal immigration, what policy exactly is being proposed to prevent crossing the border by those being critical here?