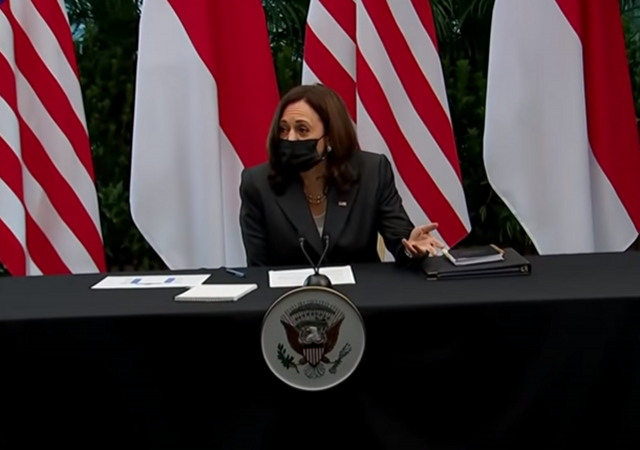 If you’ve been watching in horror this week as President Biden has made a mess of Afghanistan, you will get no comfort from the following news about Vice President Kamala Harris.

While visiting Singapore as Afghanistan falls to pieces, Harris talked about climate change and Christmas shopping.

When Kamala Harris arrived in Singapore on the first leg of her Asian trip, she claimed that getting out the Americans and allies who were trapped in Afghanistan was her first priority. That was right after she cackled when asked that question, really showing how serious she was about it.

But then, during her major foreign policy speech in Singapore, what did she talk about? The big issues of the day: climate change and Christmas presents.

Kamala Harris tells us to buy Christmas presents now, warns about climate change and China – but fails to address catastrophe in Afghanistan in Singapore speech

Harris, addressing a roundtable of business leaders before her speech, warned that climate change and the pandemic have contributed to supply chain issues, The New York Times reported, and suggested parents should consider getting Christmas presents now.

‘The stories that we are now hearing about the caution that if you want to have Christmas toys for your children, it might now be might be the time to start buying them, because the delay may be many, many months,’ she said.

‘So across the board, people are experiencing the issue.

‘And, of course, the climate crisis is fueling a lot of this. When we look at the stronger typhoons that have disrupted shipping lanes and sea level rise, which threatens port infrastructure as an example. So these are the many issues that are that are causing these disruptions.’

Now, to be fair, she did mention Afghanistan at one point during her visit. Naturally, she parroted the administration’s line about evacuating people with a singular focus.

‘Right now we are singularly focused on evacuating American citizens, Afghans who have worked with us and Afghans who are vulnerable, including women and children,’ Vice President Kamala Harris said during a visit to Singapore https://t.co/3D24DmpmbO pic.twitter.com/gZALUo2M65

Are you ready for President Harris if it comes down to that?

Maybe she could sleep with a Taliban.

Why use the singular?

One night with her and they wouldn’t feel liking raping for a month.

I’m sure those fellows would draw the line at that…

You mean a camel would be preferable to a kamala?

She probably already has.

probably already has, just a quickie here and there

Kamala’s strategy is to bring up another topic in an attempt to avoid the ISSUE. Avoid the ISSUE at all costs and point in another direction. Focus on something else. And don’t forget to smile. A winning smile goes a long way to winning over the audience.

Yes. The shadow government will get rid of scapegoat Biden owning Afghanistan and POTUS Harris will have no fingerprints on the mess. A clean start for the new puppet. She is in SE Asia getting briefed.

The shadow government needed a bumbling fool so the incompetency narrative would be believed. She gets the next phase where we the people are the targets.

Biden has no mind. Harris has no soul (sold long ago). The road is about to get rough.

You hit the nail on the head with a sledge hammer.

And an inappropriate cackle makes everyone more comfortable.

The cackle is the cherry on top. But even with no sound, her inappropriate facial expressions drive me crazy,

cackles just call her cackles, make a harsh, raucous sound when laughing is our cackling veep! brings joyful suggestions for Christmas gifts, then cackle some more! GOD HELP US FROM THE PEOPLE WHO VOTED BIDEN AND HER as leader FOR THE REST OF US! They are the 84% NON INDEPENDENT THINKERS WHO VOTE! U.S. Adult COMPREHENSION LEVEL 5th grade 10-11 year old thinkers voting!

Seems like that a profound disconnect with reality is a prime attribute for Leftists. Intelligence is far down the list.

A lady DOES have her priorities…!

Well sure a lady, that’s no lady.

That’s no lady, that’s the Veep!

Now I’ve got the Tom Jones song stuck in my head.

I sincerely apologize. I don’t even know the song, and given that I loathe the sound of Tom Jones, I will not bother to listen.

She is a witch in Veep’s clothing.

Hey, if you had a boss who was anxious to keep you touring out of the country to avoid getting 25th-ed, wouldn’t you also be making lots of noise about shopping-and eating-tour destinations instead of getting-raped-and-beheaded destinations?

H’mmm… (tugging on beard in thought…) I don’t know…

I sense a profound rage building in America. With the endless missteps of the Biden administration and the habitual cackling of Kamela at the most inappropriate times, this country has lost faith in our leadership. Should Biden abandon Americans in Afghanistan, then I see this rage becoming something barely contained. Should massive voter fraud be found as the cause of their “election”, then this country will explode in anger. It’s just that simple.

The Arizona audit results that nobody has yet seen should be released any day now. Or should I say, the “preemptively-debunked” Arizona results.
Baseless!
(Twists gas feed valve.)

Harris is taking orders. Her “stupidity” is a distraction for people who think. What are we not supposed to see in the next couple of days? Vaccine Nazis in action?

I’ve never hoped for a military coup in the USA until now.
I think we will see it if hidin’ Biden is removed.
Let’s hope they are on our side.

Given everything I’ve seen about recent changes in the military, I’m not sure I’d want to see one now, either.

– Afghanistan is a shining success of the Biden* junta
– no American was stranded in Afghanistan, and any American captured or killed by the Taliban deliberately close to remain
– Republicans are the Taliban, and the Afghanistan Taliban are tolerant multiculturalists
– we are enjoying the best economic recovery in the history of the Universe
– the Wuflu has been totally defeated by the brilliant Biden* plan, and we need draconian lockdowns, vaccine passports, and 100% voting by mail to defeat it
– the real enemy facing AmeriKKKa is rampant white nationalism and global warmi-, ah, climate change

You have your orders! Now BELIEVE!!

And they can get 60% of this country to believe it through their total control of news media, entertainment, Silicon Valley and education of K through graduate school.

I think everyone is missing the bigger picture of her Christmas present statement. It’s true the supply chain is broken at this point. While toys are going to be the least of people’s concerns as we head in to the fall and winter months, it’s not just toys that will see unavailability. Food and basic necessities are already becoming increasingly short on the shelves.

Ridicule the woman all you want – she deserves every bit of it. But disregard her actual comments to your own detriment. Keep your powder dry.

We are in big trouble when Biden is either impeached or taken out by the 25th article…Before dropping out of the campaign for the 2020 Democratic presidential nomination, California Democrat Senator Harris polled at 4% of the party’s voters and she was the first choice of only 7% of the California’s Democratic primary voters…scary