Pentagon also believes there was only one explosion. 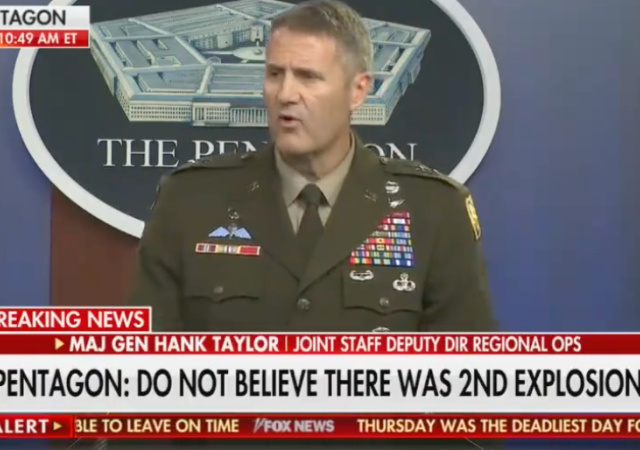 The Pentagon confirmed the terrorists killed 13 U.S. service members and at least 90 Afghans on Thursday.

Kirby: "We still believe there are credible threats. In fact, I would say specific threats and we want to make sure we're prepared for those…We certainly are prepared and would expect future attempts, absolutely, but I won't get into the specifics of what those are" pic.twitter.com/VzvQnvcq4X

Press Secretary John Kirby said the U.S. is sticking with the August 31st deadline. He also could not explain how they would evacuate Americans after August 31st.

On Thursday, officials said the terrorist bombed the airport and an area by the Baron Hotel.

Now the Pentagon says only one attack happened.

#BREAKING: Maj. Gen. Hank Taylor says there was NOT a second explosion in Kabul, saying the Pentagon isn't "sure how that report was provided incorrectly" and "we felt it was important to correct the record with you all here." pic.twitter.com/IIF5gFC085

“When your President says ‘we will not forget and we will not forgive,’ it’s exactly what he did. He forgave the Taliban. He forgot what they did. He’s leaving and there was no hunting down,” Durrani told CNN.

The US is “setting an example of the fact that every now and then when you fight a holy war and you recruit people and you murder people in suicide bombings, after two decades, you are acceptable,” she said Friday.

Durrani also offered an alternative view — one where the US has failed to offer protection to women like her despite the values they evangelize around the world, and instead, her countries [sic] much-criticized “tribes” are offering her alliance and support.

“The US came for their own benefit and for their own war, but it was just fought on our ground,” Durrani said. “Your president said that we are a country that is having petty fights about our tribes. It’s the tribes that are protecting me right now. It’s the different ethnicities that are protecting me. It’s the different allies that I have built over the course of years, who are here who are willing to protect me.”

In withdrawing from Afghanistan, Biden is sending a message that he is forgiving and forgetting the Taliban’s violence and abuses, Afghan human rights activist Pashtana Durrani says.

I’ve lost all faith in these cardboard generals. They’re nothing but incompetent, political hacks, exemplified by those two putzes Milley and Austin.

Eight years of Obama has had its consequences.

And THIS will prove to be the most important nInternet post in American history:

She wouldn’t have said it if she wasn’t being trained for it.

Why am I not surprised? Because I assumed that’s the attitude Milley and Austin have been actively encouraging.

In a sane country with a sane military she’d be immediately discharged.

“Arrogant, woke US soldier says she’ll shoot Americans who disobey her if martial law is declared”

Let her go to Afghanistan and shoot some taliban first.

She can take a bullet between the eyes as well as any other traitor.

The White House is reporting that second blast was poop exploding out of Biden’s ass when he heard the news of the attack.

How many Taliban were killed in the blast ? None?

Think maybe they knew at least enough to get out of the way? To stay away from the targeted area?

After all, they released thousands of ISIS terrorists from Afghan jails.

Taliban claims more than 20 of its fighters were killed in the blast and “strongly condemned” the attacks “against civilians,”

Just reporting what they said.

The nation is being led by one of the wise men… of Chelm.

Pray for our military still on the ground there.

Lions led by a jackass who will sooner leave them to die than take a question from the press.

Bring these lions home safe, and until them protect them in duty.

I hope everyone is paying attention to all of the Bush machine and how they are four-square behind Biden. Here’s Bolton blaming Trump:

No more nose-holding!!!! The GOP is WORSE than the Dems!

Biden has no choice but to accept August 31 as the date. He backed himself in to that corner.