Afghani Women Protest Against the Taliban Amid Crackdown

Afghani Women Protest Against the Taliban Amid Crackdown

Where are the feminists? Afghani women face actual oppression unlike the fake oppression women supposedly endure in America. 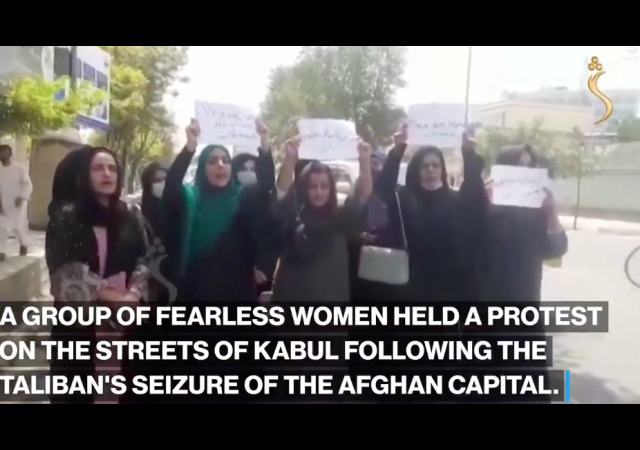 Protests erupted all over Afghanistan the last few days against the Taliban. Those protests hit Kabul on Thursday on Afghanistan Independence Day.

They celebrate their independence from British rule in 1919.

Women took charge in some of these protests. As we all know, the Taliban treat women like crap. We know the Taliban will cut women off from education, make them completely cover-up, etc.

The United States and the rest of the world demanded the Taliban respect women. The insurgents promised “to provide women with [an] environment to work and study” and place them in the government. However, they will only do this “according to Islamic law and in accordance with our cultural values.”

In other words, oppression.

As the Taliban close in, some women choose to hide. They’re terrified. Some sources said insurgents go door-to-door to find the opposition.

I cannot blame them. I do not fault the women who hide and stay home:

“I do not believe the Taliban,” said a senior female broadcaster in Kabul, who said she remained in hiding Tuesday at a relative’s house.

She said she was too frightened to return home much less to work following reports the Taliban had a list of journalists and had knocked on some of their doors after entering Kabul on Sunday.

Her father told her to stay in hiding until the security situation becomes clearer. Speaking to the AP by phone, the 29-year-old, who wished to remain anonymous for fear of retaliation, said the situation is unclear for women in Afghanistan.

But some women emerged and protested the Taliban.

Women protesting against the Taliban in Kabul, asking for political and social rights.

Independence day protest in #kabul. Women and girls, men and boys screaming LONG LIVE #Afghanistan OUR NATIONAL FLAG IS OUR IDENTITY! They marched past #Taliban with some Talibs screaming back at protestors, waving their guns at them but finally the protestors passed. pic.twitter.com/yutJcmstAP

Protest against Taliban in Kabul led by women.

Yesterday Taliban opened fire at protesters and killed at least three people but today people took to the streets again to protest against Taliban. #Afghanistan pic.twitter.com/qROeJKn4sL

'WE WANT OUR RIGHTS': A group of brave Afghan women take to the streets of Kabul to chant in protest against the Taliban. https://t.co/mr0OZLZFPF pic.twitter.com/LxFPJqWfeA

And several people were killed in the eastern city of Asadabad when Taliban fighters fired on people waving the national flag at a rally there on Thursday, Afghanistan’s annual Independence Day, according to a witness cited by Reuters.

It was not clear whether the casualties had come from the gunshots or from a stampede they set off, the witness, Mohammed Salim, was quoted by the news agency as saying.

It was a remarkable display of defiance, coming just one day after violence broke out at protests in two other cities, with Taliban members shooting into crowds and beating demonstrators.

This is Asadabad , city the capital of Kunar province. pic.twitter.com/HSohtXK00h

I've seen this reported as just Jalalabad but there are two sets of images circulating right now that show protests in both cities; left is a plaza on the Kabul-Jalalabad road; right is a tower/square in Asadabad. pic.twitter.com/EtztAZclcq

Brave women. Maybe there is hope after all.

The Taliban may struggle to keep fighters in the field as the fighting season comes to a close. Traditionally, fighters go home for the winter and enjoy their war spoils. This may give Afghans the opportunity to liberate parts of their country where they are not popular. We will see.

“Brave women. Maybe there is hope after all.”

Could be. And it could be that someone wants the outside world to think so.

Here are the feminists:

What garbage is infesting our government.

The US Government pumped $100 million dollars into the University of Kabul so that they would offer a 2 year Masters Degree in Gender Studies. Eventually, even the well bribed Afghans could not stomach it.

People who believe this whole “women will have rights” line from the Taliban are ignorant of the recent history of the group, as well as the Islamic concept of Taqiyya.

The basic concept is that total lies uttered while engaging in the furtherance of Islam, are not only forgiven, they are to be commended.

These women are incredibly brave. I would “hide and stay home.”

These Afghan women have nothing in common with the US women who constantly complain about “the patriarchy” and cancel anyone who doesn’t agree with them.

Definitely brave. Much like the women who serve in the Kurdish Peshmerga.

Women complaining about men. What else is new.

Ain’t that the truth.

They have more balls than all out “leaders” combined.

They haven’t been bought out by the Communist Chinese.

If they were women of a different color Michelle Obama would have hashtags all over the place.

That makes me wonder, where in the hell is “The Squad” during all of this? Tlaib and Omar are Muslims. They all “identify as” “people of color”.

These Afghan women are “people of color” who are actually being brutally oppressed right now in real time.

The real world outside of their bubble suddenly shows up, and AOC and the rest of those obnoxious harpies have nothing to say.

If they were to admit it’s wrong they might be asked to do something. But they are only talkers not doers.

When your job, your entire life’s purpose is dependent upon a non-existent problem, the solving of that problem becomes a mortal threat to your so called livelihood.

Those harpies should be sent to Afghanistan, it would be a character building experience.

Must you mention that disgusting POS? I just ate.

Afghan women protesting their oppressors. Real oppressors. Not like American women who protest that men don’t kiss their asses.

I don’t see too many feminazis out in front of the White (SUPREMICIST!!!!!!!!!) House protesting to Hidin’ Biden that he unleashed the Taliban on these women.

Tlaib and Somali Princess are happy that Afghan women should be forced to cover themselves. But god forbid someone telling women maybe they should cover their tits. MISOGYNIST!!!!!!!!!!!!!!!!!

These women will be hunted down and publicly stoned.

Then they’ll go after the transgender and LGBTQWERTY group and teach them to fly. Off of an 8 story building tied to a chair. The flight is invigorating. The landing? Not so much.

They have already dismembered military commanders, and are balls deep in their children. That should be a welcome change from boning goats and sheep.

But my bet is… I’ll get more shit from this comment than Biden will get for unleashing terrorists onto the streets of Kabul.

I think they quite well know they are targets for reprisal – torture, rape, death. That is what makes them quite brave. I am very impressed.

Yes, they are very brave, Sir Robbin. I think many people are very impressed.

Juxtapose with the Slut Walk for reproductive rites that deny women and men’s dignity and agency, and reduce human life to a negotiable property.

Brave but they are not going to let this go on sadly.

It is already being reported that Taliban are gang raping and murdering women. It bet that those who are murdered wish they were dead.

If they’d only turn loose on Pelosi and Clinton.

The Afghan women may be the salvation of their Nation! Organize a “Night of the Long Knives”!! Just wait till after the nightly rape and your “man” has fallen to sleep and then make sure he never wakes up! Let him drift off into that wonderland of 72 virgins! Not all will be successful, but if they can also enlist the abused little boys they have a chance!