The city building inspector disagrees. However, the artist who painted the mural insisted only an act of God or vandalism could have destroyed the mural. 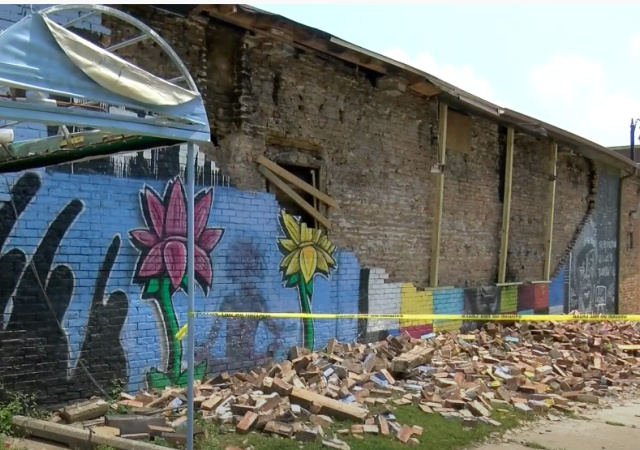 Witnesses claimed a George Floyd mural in Toledo, OH, on a building crumbled due to a lightning strike.

City building inspector Hugh Koogan disputed the account because “the wall had been showing signs of weakness for some time and literally just gave way on its own.”

David Ross painted the mural, titled “Take a Breath,” a year ago to honor Floyd.

Ross disagreed with the building inspector because “he saw the strength of the wall first-hand” and only “an act of God or vandalism” could destroy the wall.

The Toledo Fire and Rescue Department listed lightning as the cause because of the witnesses and an investigation.

The George Floyd Memorial mural at Summit and Lagrange in Toledo has come down. No word yet on the circumstances #13abc pic.twitter.com/SkB2eDhijB

The fire department said lightning. I’d tend to believe them before a building inspector who claims the walls were bowing yet never filed a report.

As Marxists they already believe that.

Lightning is white across the night sky…just another example of that evil white racist Mother Nature!

Up next on the racist chopping block: Darwinism!

This is a local story. When the lightning idea was reported, I thought as an act of God, that might mean something.

It is true, God does indeed move in mysterious ways 🤣

When are the riots?

Riot against God? How about a riot during a thunderstorm?

BLM will be declaring God racist.

Perhaps God found the rendering of George Floyd as an angel to be blasphemous or the epitome of a “graven image” (the 2nd commandment).

If that’s the case, then I hope our Father in Heaven saw the statue “Christ of the Ozarks” which was defamed by baby killers who hung a sign saying “God bless abortions” from Christ’s outstretched arms. I hope he strikes as many as raised that blasphemous sign with lightning as well.

If He found a two-dimensional mural to be a “graven image”, then He must really hate that statue, and would be more likely to strike it than those who defiled it. So I think we can reject that branch of your hypothesis.

Wow, check out all the fentanyl that was buried under that wall!

I wouldn’t discount the lightning angle. Floyd was a false idol, after all.

God reached down from Heaven and smote it to bits, due to it’s blasphemy.

Lightning needs to hit some people north of the border:

At the moment of the collapse a vision of Floyd’s momma appeared to 3 youthful negro gang members who were entrusted with 3 secrets.

and only “an act of God or vandalism” could destroy the wall.

If the building was in such awful shape I have to figure that the mural was illegal … meaning that it, itself, was vandalism.

Lightning is a nice touch but it would have been more apt if some criminal, jacked up on a neo-speedball of fentanyl and meth, had rammed a stolen SUV into it.

If a vehicle had hit that wall, the whole crappy building would probably have caved in.

If lightning was able to knock down a brick wall, I assume that the bricks were structurally unsound to begin with. If you look carefully, you notice there are no stringers within the wall. It was veneer brick, and probably not well attached to the wall behind it.

BRB, gotta go visit a church and talk to the Man Upstairs. If He’s feeling frisky enough to toss a few lightning bolts around, I better make sure I’m on His good side.

Was a muscular, blond-haired male waving a hammer anywhere near the wall when this happened? If so, perhaps Ragnarok has started. That would actually explain quite a bit.

Now do the statue.