“Russell has a benefit of having white skin” 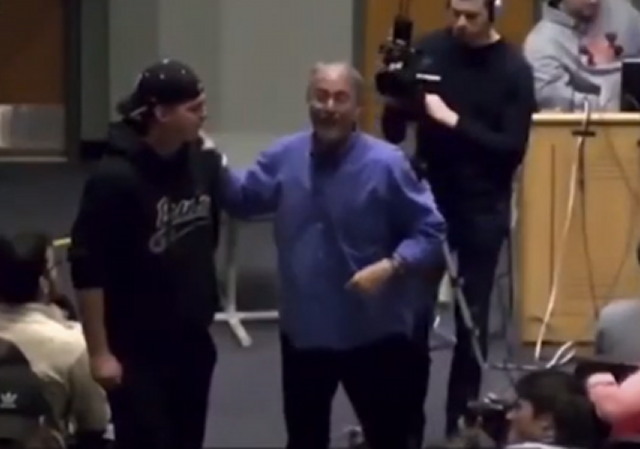 This is maddening to watch. How many parents know that this is what their tuition dollars are funding?

Professor makes ‘average white’ student stand up in lecture, explains he has inherent ‘benefit’ over black student no ‘matter what he does’

A professor at Penn State University recently made an “average white” student stand up in front of a 700-person lecture hall and explained that he has an inherent “benefit” over any black student, regardless of his behavior.

Dr. Sam Richards, a popular sociology professor at the Pennsylvania school, was attempting to demonstrate the effects of systemic racism last month when he executed the unusual classroom illustration.

“I just take the average white guy in class, whoever it is, it doesn’t really matter,” Richards said as he approached a section of students.

“Dude, this guy here. Stand up, bro. What’s your name, bro?” the professor then asked telling a student named Russell to stand up and face the class.

“Look at Russell, right here, it doesn’t matter what he does,” Richards continued. “If I match him up with a black guy in class, or a brown guy, even … who’s just like him, has the same GPA, looks like him, walks like him, talks like him, acts in a similar way, has been involved in the same groups on campus, takes the same leadership positions, whatever it is … and we send them into the same jobs … Russell has a benefit of having white skin.”

Penn State Professor pulls an “average white student” from the lecture audience and explains that he has an inherent benefit over a black student because he is white.

Critical Race Theory pedagogy teaches the same lessons to k-12 students. This is why it does not belong in k-12. pic.twitter.com/duIYlB0Jdu

Penn State Professor brings a white and black student to the front of the lecture and asks the white student how he feels about his white privilege.

Critical Race Theory pedagogy divides people and assigns worth based solely on race. This plays out the same way in k-12 schools. pic.twitter.com/xTwgrCvESS

Sociology professors. Creating a hostile educational environment since 1830. (or so)

there are many empty gibbets available for immediate occupancy

I wonder what the esteemed professor’s reaction would be had the white student told the prof to shine his shoes?

First thing I would have said was, “My name ain’t ‘bro.'”

I was at some shope recently where the salesman addressed me as “my brother”. A) he was not black. B) I am not black. C) He wasn’t even a fellow furface.

I corrected him, politely but firmly.

“Critical Race Theory” as pedagogy doesn’t belong in ANY classroom, whether K-12 OR post-secondary.

“Look at Russell, right here, it doesn’t matter what he does … Russell has a benefit of having white skin.”

I so badly want to see this prof lose his position to a diversity hire.

“Privilege” does not exist ex nihilo. It had to start somewhere with some people at some point in history.

I have no problem with others admitting to the world that my ancestors were more apt, more intelligent, more able, more sophisticated, and much more likely to come out on the winning side of any conflict with their ancestors. If they want to take it back 50 years, 500 years or 5,000 years I am up for that. The better team apparently won the privilege game and took home the trophy. The 2nd place team took home — well — 2nd place.

No matter how you slice it… they are making the claim for me that their ancestors could not quite hack it when it came to competition for the “privilege” of being on top. They were weaker, ineffective, and overall a fine example of Darwinism in action. Seems to me as if they are pointing the “finger of blame” at the wrong set of ancestors. I’d suggest they have a heartfelt talk with their grandma and grandpa and ask them why ~their~ grandmas and grandpas were so pitiful in the game of life.

Now understand that ~this~ is how ~they~ see the world. This is what ~they~ are admitting happened. Unless, of course, they want to somehow claim that “privilege” just happened along one day from out of nowhere and someone picked it up off the ground and has been using it ever since. Should be an interesting and amusing read.

Now there is a movement to remove and undermine the accomplishments of those that came before in this new age of being Woke. The question is, who is going to win this fight in this day and age? Given what is happening and how, ultimately, fight there will have to be.

Just to be clear, it isn’t white vs people of color either, though that isn’t how it is being framed by the would-be overlords. It is a fight for the future and freedom of thinking people, whatever their skin color.