Juan Tang is now on her way back home to China as average Americans begin questioning the priorities of American law enforcement officials. 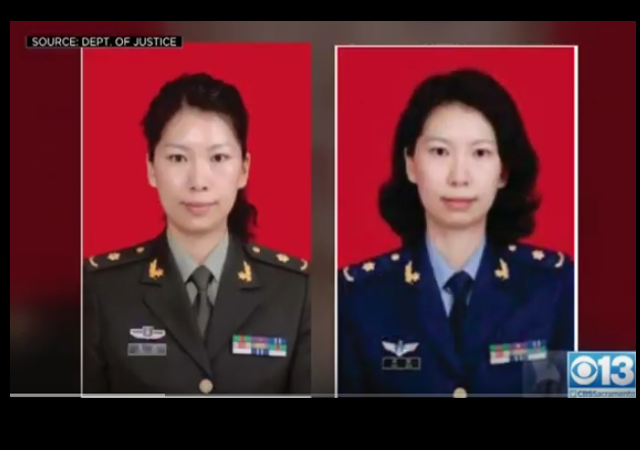 Last July, I reported that the Trump administration ordered the closure of the Chinese consulate in Houston, a severe diplomatic step that was a response to a surge in Chinese espionage in this country.

At that time, a University of California-Davis researcher who had fled to the Chinese consulate in San Francisco after allegedly lying to investigators about her Chinese military service was arrested.

This July, it appears that with a different administration there are different priorities. U.S. prosecutors are dropping their case against Juan Tang, the researcher accused of concealing her ties to the Chinese military on a visa application so she could work in this country.

In documents filed in federal court in Sacramento, prosecutors asked a judge to dismiss a charge of visa fraud against Juan Tang but gave no reason why.

The trial was set to begin on Monday. A message seeking comment from the U.S. Attorney’s office in Sacramento was not returned.

Tang’s attorneys told the Sacramento Bee they provided “ample reason” to the government for dismissing the case.

“We hope Dr. Tang is allowed to return to her daughter and husband on her own,” Malcolm Segal and Tom Johnson said in a statement.

The case has now been dropped, just ahead of the trial that was slated to begin Monday. The U.S. Attorney’s office in Sacramento has not offered comments to press inquiries.

Tang’s lawyers argued that she really wasn’t a member of the Chinese military.

Tang’s attorneys had argued that the doctor was not a member of the Chinese military but had worked as a civilian at a Chinese military facility. They said the charge of lying on her visa application likely would have resulted in a six-month sentence, less than the 10 months she has already spent in jail and under house arrest.

U.S. District Judge John A. Mendez previously dismissed a separate count charging Tang with lying to the FBI because agents violated her Miranda rights by not advising her that she did not have to answer their questions.

Tang never was able to begin her cancer research at UC Davis because the coronavirus pandemic shut down the lab where she was to work.

Tang is now on her way back to China. She appears deeply grateful to her lawyers.

Thursday afternoon, she first got word that the U.S. government was dropping her case, and Friday morning the word became official when Mendez signed an order dismissing the lone remaining count against her.

“I think at first she was stunned, not quite understanding how it happened, why it happened,” Johnson said in an interview Friday inside Segal’s office.

“She was, of course, thrilled,” Segal added. “We had to talk to her with a (Mandarin) interpreter on the phone, but we accomplished that and immediately made contact with the court to arrange the removal of her ankle bracelet and to get the return of her passport so that she could return home.”

Before noon Friday, Tang was on her way to catch a flight back to China, stopping long enough outside the federal courthouse in downtown Sacramento to pose for a photo holding her passport up and standing between Johnson and Segal.

This development has many Americans scratching their heads about the choices being made by the nation’s law enforcement authorities.

Fbi is to busy making up fake crimes and fake documents to go after real crimes, must me nice to have plush government job and benefits and do nothing but entrap the innocent American citizens

that’s 3 cases in the last 24 hours that under Trump if they were dropped would be headline news.

US prosecutors cannot be bothered with prosecuting Chinese Communists who have infiltrated our government systems. They must devote their time to prosecuting average American taxpaying citizens who felt their voting rights were stolen via the fraud that is slowly being uncovered in spite of the Democrat’s attempts to shut down any and all investigations. AntiFA? Nope, they were just peacefully protesting. Those peaceful protests cost Americans millions of dollars. BLM? Yep, their peaceful protests also cost Americans millions of dollars. The January 6th rioters? They cost those in Congress working so diligently to cover up the Big Steal hours of sleep therefore, they need to be Manaforted! We watched the Mueller/Weissmann “team” destroy families via imaginary charges stemming from imaginary “facts”. Old Joe was right on the campaign trail that we should have listed to the real truth over the Democrat “facts” (Fictionally Attributed Clandestine Truthless Subterfuge)!

Antifa and BLM , billions of dollars in damage, not millions. All else totally accurate.!!!

Apparently there some people who are above the law.

China’s “investment” it made with Hinter is paying dividends

Gee what a surprise. First AG Merrick Garland has decided he isn’t going to initiate an investigation into the unnecessary elder care facility deaths caused by Cuomo and Whitmer and now he’s dropping a case against a Chinese national that lied on her visa application for entry into the Unites States.

Sounds like the Biden regime is getting their moneys worth out of Garland. I wonder what’s next.

To be fair, we’re at the point where I don’t trust Federal investigators regardless of the accusation of guilt or innocence.

Nope, I’m not being fair. Merrick Garland got his job running the DOJ for one purpose and one purpose only. To make sure that no democrat is ever going to be held responsible for their criminal actions going for in the Biden regime. So what I said stands, sounds like the Biden regime is getting their money’s worth out of Garland already. I wonder what case(s) he’s going to be dismissing next are. One things for sure, it won’t be the illegal criminal prosecution of any of the Jan 6th protesters cases that get dismissed.

The left installed Merrick Garland into the DOJ for precisely the same reason that the Dodge City Gang installed Hoodoo Brown as town coroner.

Just another example of the country dodging a bullet as a result of McConnell ensuring this extreme partisan (not a jurist) never became a Supreme Court Justice.

On top of the reality that, given his performance in his Senate hearings, he and Joey the Drooler are vying for the least competent President and AG in history.

What’s the difference between this case and the one invovling General Flynn? Flynn was innocent and these are guilty. The judge in this case has no objection to the guilty being set free while the judge in Flynn’s case objected to the innocent being released.

It pays to own the King, even if he is mindless

The FBI failed to advise Ms. Tang of her rights?

Isn’t that Investigations 101 — read the Miranda warning off the card you keep in your shirt pocket, ask the perp if he/she understands their rights, and then keep going?

The actors on the TV series “FBI” apparently are better FBI agents than are our FBI agents.

They conveniently didn’t Mirandize Hillary Clinton either. It’s happening so often that it starts looking like a pattern of misconduct not error.

“The actors on the TV series “FBI” apparently are better FBI agents than are our FBI agents.”

These days, rumor has it that they always have been.

How much did China pay Biden to drop the charges?

They probably don’t even need to pay him anymore – they have so much to extort him on.

Nothing. It was already covered by his retainer.

It isn’t as if the Biden Admin has made illegal immigration and visa fraud priorities, why should we be surprised?

It’s almost as if Beijing has undue influence in Washington, or something.

Gee, I and a lot of my colleagues did the same thing at the Pentagon. Absolutely none of us got uniforms, though. Isn’t there something in the Geneva Convention about that?

“agents violated her Miranda rights by not advising her that she did not have to answer their questions.”

God bless the American legal system. I’m sure if all the shoes were on the other feet, the Chinese legal system would have had a Buddha-sized belly laugh at this defense.

Miranda only kicks in if the cops want or need to use your statements. If they have it all on video, Miranda is irrelevant.

Enough is enough! The entire Dem. Party and many RIONO’s have been compromised by the CCP. We are watching the self immolation of our once great Republic. LtGen. Mike Flynn must be prosecuted to the fullest extent after clearly being setup by the FBI and yet a a Chinese Spy…, meh. ENOUGH!

“We are watching the self immolation of our once great Republic…

It was probably said in German at one time:

Between the teachers’ unions, the DOJ, FBI, and so many more parts of our government, I find myself continually asking “Whose side are they on?” for clearly it is not America’s.

This is almost as infuriating as Obama’s Department of Injustice dismissing a voter intimidation case against members of the New Black Panther Party in Philadelphia AFTER essentially winning the case.

Leslie Eastman: This development has many Americans scratching their heads about the choices being made by the nation’s law enforcement authorities.

Lucifer Morningstar: The charges were dropped and she was allowed to go back to China, penalty free.

Being held in confinement for months is hardly “penalty free.” Nor do we know why charges were dropped. There may be a diplomatic reason, or the case was weak. She wasn’t charged with spying.