The State Department acknowledged that “this is the first time a NATO member has been listed in the child soldier prevention act list.” 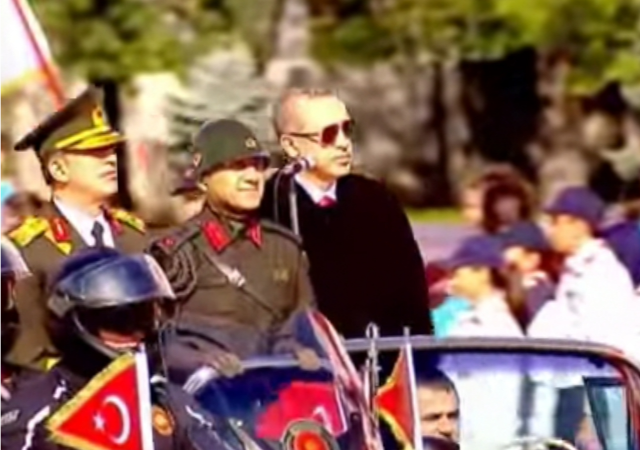 The United States placed Turkey on the list of countries implicated in using child soldiers.

On Thursday, the U.S. State Department accused Ankara of providing “operational, equipment, and financial support” to Turkey-backed militia in Syria and Libya that recruit child soldiers.

The State Department acknowledged that “this is the first time a NATO member has been listed in the child soldier prevention act list.”

The decision could curb U.S. military assistance going to the NATO ally. “Turkey and 14 other nations, including Afghanistan and Pakistan, were hit with the same designation, which can result in the loss of U.S. military training assistance,” The Associated Press reported.

Thursday’s decision could further jeopardize Ankara’s ambitions of joining the European Union. The Muslim-majority country wants to join the European bloc, which will open Europe’s borders to more than 80 million Turkish nationals.

The U.S. State Department determined in its 2021 Trafficking in Persons (TIP) that Turkey was providing “tangible support” to the Sultan Murad division in Syria, a faction of Syrian opposition that Ankara has long, supported and a group that Washington said recruited and used child soldiers. (…)

In a briefing call with reporters, a senior State Department official also made a reference to the use of child soldiers in Libya, saying Washington was hoping to work with Ankara on the issue to address it.

“With respect to Turkey in particular…this is the first time a NATO member has been listed in the child soldier prevention act list,” the State Department official said. “As a respected regional leader and member of NATO, Turkey has the opportunity to address this issue — the recruitment and use of child soldiers in Syria and Libya,” she said.

Turkey has carried out three cross-border operations in Syria against the so-called Islamic State, as well as U.S.-backed Kurdish militia and has frequently used factions of armed Syrian fighters on top of its own forces.

Some of these groups have been accused by human rights groups and the United Nations of indiscriminately attacking civilians and carrying out kidnappings and lootings. The United Nations had asked Ankara to rein in these Syrian rebels while Turkey rejected the allegations, calling them ‘baseless’.

Turkey, through proxies and its own armed forces, has also been involved in the Libyan conflict. Ankara’s support has helped the Tripoli-based government reverse a 14-month assault from eastern forces backed by Egypt and Russia.

Governments placed on this list are subject to restrictions, according to the State Department report, on certain security assistance and commercial licensing of military equipment, absent a presidential waiver.

Turkey’s support is not limited to militias in Syria and Libya. President Recep Tayyip Erdoğan’s regime is among the leading supporters of the Gaza-based Islamic terrorist group Hamas. The Turkish leader has repeatedly made vile antisemitic remarks and tried to rally Muslim nations against Israel. Last October, the Turkish leader even staked a claim on Israel’s capital, Jerusalem. “Jerusalem is ours, Jerusalem is from us,” he said, referring to the Ottoman-era rule over the Holy City.

The Trump administration had been vocal against Turkey’s support of Palestinian terrorist groups. “President Erdogan’s continued outreach to this terrorist organization only serves to isolate Turkey from the international community, harms the interests of the Palestinian people, and undercuts global efforts to prevent terrorist attacks launched from Gaza,” Mike Pompeo-led State Department said in August 2020.

The State Department’s decision shows how Turkey, under President Erdoğan has degenerated from a Cold War-era ally to a regressive jihad-sponsoring regime. The sole Muslim-majority NATO ally is ramping up military ties with Russia and projecting itself as the leader of the Muslim world by supporting terrorist groups and Islamist causes.

We know who our friends are. And who they aren’t.
.

But none of that keeps our masters from sending lots of our money to both.

Yes! Let’s meet in Byzantium and have a beer while we sign the agreement.

Doesn’t that guy in the helmet bear a really strong resemblance to Mussolini?

Kind of. He needs to tilt his head farther back so he can look down his nose at the peasants.
.

Turkey should be kicked out of NATO.

We needed Turkey for military bases. Turkey needed our money.

But Erdoğan is no ally. He’s a shrewd dictator building up his nation – and why not? But the US’s welcome to Erdoğan is fading, especially given the weakness of the US with Biden-Cackles administration.

But at least we don’t have a person making mean tweets on Twitter® any longer. That’s a good thing, right?

“The Muslim-majority country wants to join the European bloc, which will open Europe’s borders to more than 80 million Turkish nationals”

Otherwise known as the final invasion and conquest of Europe by Islam. Jan Sobieski is rolling in his grave.