Turns Out the ‘Fully Constructed’ U.S. Capitol Lego Set Was Not Constructed

Turns Out the ‘Fully Constructed’ U.S. Capitol Lego Set Was Not Constructed

Have any of the authorities involved at the scene ever seen a fully constructed LEGO set? I guess not. 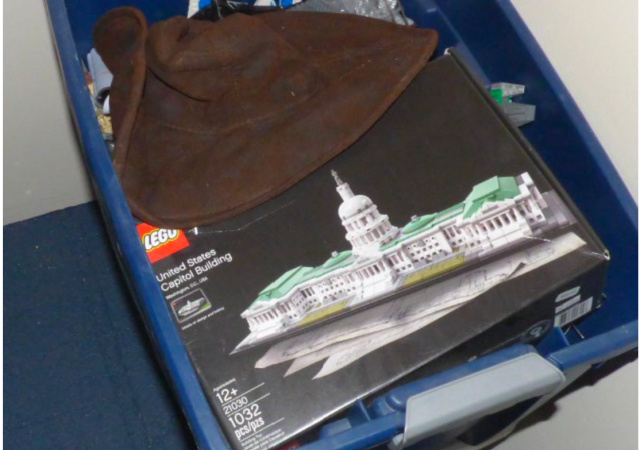 The FBI arrested Robert Morss at his home in Glenshaw, PA, for allegedly taking part in the Capitol Hill riots.

The mainstream media went crazy because the FBI supposedly seized an entirely constructed Lego set of the U.S. Capitol.

During his arrest, law enforcement recovered some clothing and other items that appear to match those he carried with him on the 6th – including a “Don’t Tread on Me” flag, a neck gaiter, a military utility bag, a black tourniquet, and military fatigues. (Law enforcement also recovered [sic] a fully constructed U.S. Capitol Lego set.) In addition, MORSS had three different firearms including a handgun, a shotgun, and a rifle.

Except the authorities found the Lego set in the box.

The United States Attorney for the District of Columbia had some updates for the original detention memorandum, so the office submitted a supplemental memorandum. It admits the massive mistake:

In the original detention memoranda, the undersigned stated that law enforcement found a “fully constructed U.S. Capitol Lego set.” Please note that after a review of the photographs from the search, there appears to have been a miscommunication and that statement appears to be inaccurate. The Lego set was in a box and not fully constructed at the time of the search, as pictured below. 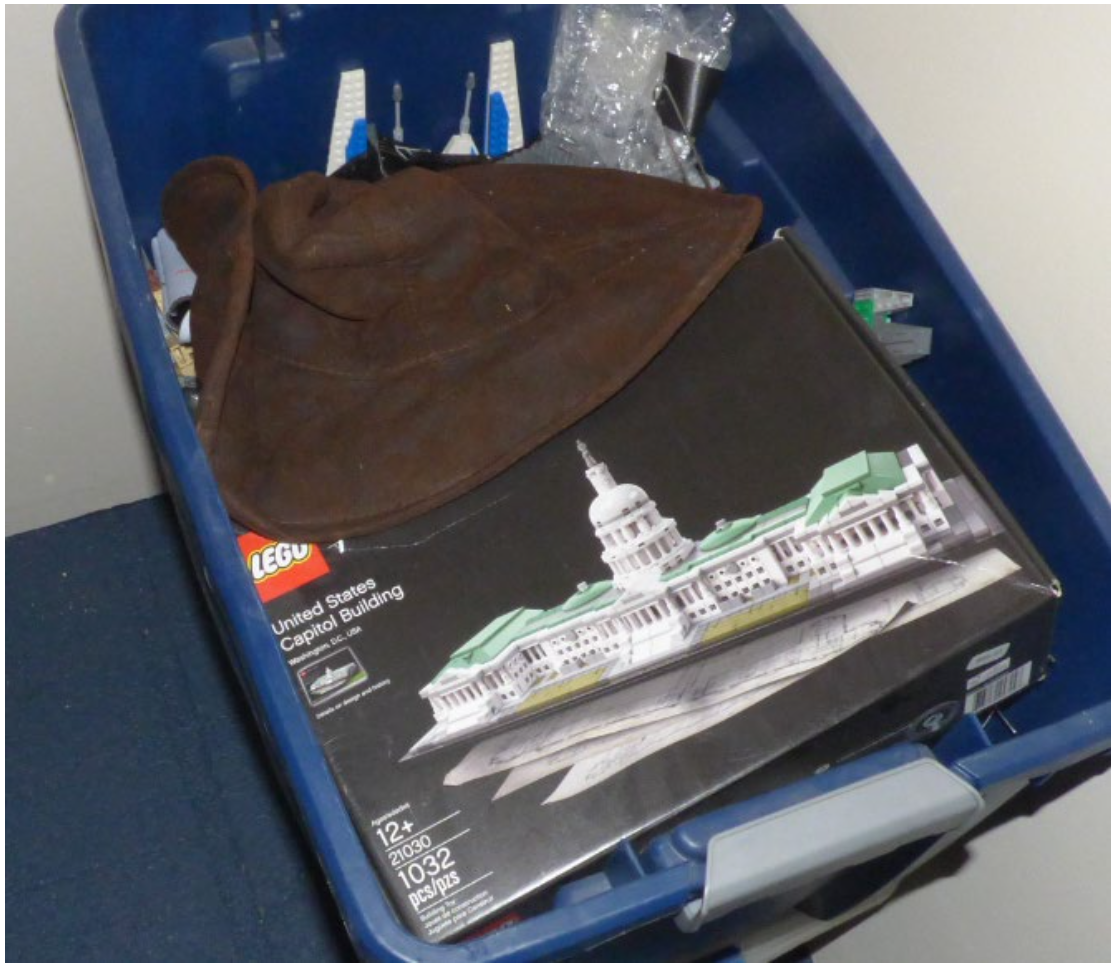 Miscommunication? Have any of the authorities ever seen an entirely constructed LEGO set before?

The FBI will lie about anything to get their man.

And they’re all about the process crime. Find the man, the find the crime.

It will be comical watching agents trying at assemble it.

Does it come with the lost Glock in the bathroom?

If a citizen files a document with the court and swears to the truth of the information contained, they can end up charged with perjury or maybe just “lying to the FBI,” but if the FBI or DOJ atorneys do it…crickets. Striking example of the double standard, isn’t it?

Oh, so it was non-functional? Hey, they should call Kim Gardner. She’ll have it assembled correctly.

I dunno, maybe it had a ghost receiver.

It was an 80% Capitol. Or 8%, maybe. But absolutely no serial number on it, anywhere.

Also, they didn’t actually find it *in* the suspect’s home… they found it in a huge, government warehouse, where it had been scheduled for examination by
Top!
Men!
back in 1943.

That does not change the fact that it is still too easy for anyone to buy a complete set of Legos. Without a permit. Without a criminal background check. Without training. No age limit. Without even determining if they actually need one.

Any underage child could today walk into Walmart and buy a Lego kit, and tomorrow use it to storm the Capitol. It is time for sensible, common-sense Lego reform.

The most dangerous are the unregulated Assault Legos. A very reliable and knowledgeable anonymous source told me they are used by American military planners.

We absolutely must ban Legos with bayonets.

I would love to see some congressman give a speech with those points.

How many others in congress would take him seriously?

Probably the same number who signed a petition to ban deoxyribonucleic acid (DNA), or who want to end the US military campaign against Wakanda.

What about the evils of dihydrogen monoxide?

Paddy M: and how we’ve suffered…!

Regarding the “no age limit,” I suspect there will be a lot of paper flying between the Consumer Product Safety Commission and DOJ on the matter. LOVE your post!

Wonder if there will be a strict version for California…

Still laughing three days later, but crying too! 47% of the country believed the FBI,

OMG, its worser and worser. It is a fully deconstructed LEGO set., That probably means that he intended to destroy the Capital completely. (/sarc)

He should be let off on a technicality.

Why did they take the other Legos though? I see a mandalorian fighter in there as well as some others.

They are part of a Rebel Alliance and must be dealt with. Take them away!! 😳

Are you in the Central Time zone? LI is eastern.

Be thankful they aren’t in New Jersey.

Herr Goebbels could only dream of having such a fast and pervasive propaganda machine.

There are sooooooo many people who believe it, too.

What other weapons of mass destruction LEGO set did he have? A Death Star or Blaster? I just don’t know because I’m a pacifist and don’t allow legos in my home.

This has been utterly and unspeakably insane. Frankly, had I the time, money, and inclination to be a Lego nerd, building a replica of the Capitol is something I might just do regardless of political predilection.

As for the Capitol “insurrection”, it seems that the bulk of the people they arrested did little more than mill about gawking at (not vandalizing) the statues and plaques– a very stark contrast to the Left’s trashing of our cities for the better part of 2020. No wonder Winnie-the-Pooh Xi thinks the USA is on its last legs!

The feds have released all the PDX rioters and dismissed all charges with prejudice. INCLUDING those who assaulted federal officers.

Some riots are more equal than others.

They will pry my Erector Set from my cold dead paws!

Will the Stasi sweep the country arresting kids because they have the same set and LEGO is now a sign of terrorism?

Your hornor, this is CLEARLY proof of a conspiracy to blow up the Capitol. CLEARLY, the perpetrator planned to collect the set and keep it in the box. Once he blew up the Capitol the in box set would be worth a tidy profit on the eBay. Lock him up and throw away the key!

This isnt the only kit sold. Now to round up the other 499 people who bought the kit. And the 6,739 who searched for it on line. As well as anyone selling Legos on eBay.

Don’t forget, that evil Thomas Jefferson said something about tree of liberty and blood, next up – those carrying nickels.

…and this hat, which needs deblocking….

So Lando and Admiral Ackbar don’t need to worry about the attack because it isn’t ‘fully operational’.

Every single instance of falsehood in every representation by the prosecution needs to be addressed. Quickly and severely. The DoJ and FBI are undermining themselves. Good luck earning back credibility and willingness to cooperate.

I would recommend every Rally detainee read the unabridged version of Gulag Archipelago. Most have the time, they are not going anywhere.

I have ‘military assault’ pants. In woodland camo too.

Me, too! Except mine are a pretty pink pastel camo. And more painter’s pants. But camo! Must be a sign of extremist, white supremacist, blah blah!

Where were our intrepid, federal law enforcement officers in the FBI, when the Dhimmi-crats’ goose-stepping, nihilist-terrorist-thugs in “Anti-fa” and “Black Lives Matter” were torching cities and businesses, murdering scores of innocents and desecrating synagogues? Zero response from federal law enforcement, in response to ten-plus months of Dhimmi-crat-led anarchy, violence and destruction.

But, oh, boy — the G-Men are sure on the case, now, going after conservatives who dared trespass for an hour upon the allegedly hallowed halls of the Capitol.

Not to mention the new rapid-response #FBI team created to immediately jump into action if an unlicensed semi-automatic garage door pull-rope is reported.

Secession discussions, anyone? It’s going to be now or later. Better now.

You run. We’ll catch up later.

A FBI agent lied? What a shocker!

How did Denmark get such detailed knowledge of our Capitol? How did a foreign corporation get such crucial information about our nation’s infrastructure? Will we bomb Copenhagen? If not now, when?

Maybe we can use this as leverage to get them to sell us Greenland!

I really hope no one ‘storms’ the Statue of Liberty or Fallingwater. I also have a model of the Titanic so maybe I should hide that too.

In the photo above there also appears to be a ‘military assault’ spacecraft under the hat. I didn’t realize the ‘rebels’ were so advanced militarily. Put down the rebellion at once, Emperor Biden!

This is funny, but seriously, suppose he had put the thing together, as was originally reported, so ****ing what?? What was the point of the report in the first place? Why would they even bother making up such a thing?

Obviously, he would have used a fully assembled model to carefully plan the assault!

I’m surprised the FBI didn’t plant a box of those little plastic army guys to strengthen their case….

Have any of the authorities involved at the scene ever seen a fully constructed LEGO set?

Those are quite serious charges. Morss was wearing a tactical vest and carrying a knife. Videos show him in the midst of those attacking the Capitol. After the riot, he considered fleeing from the law.