Secretary of State Blinken Invites United Nations to Investigate Racism in the U.S.

Secretary of State Blinken Invites United Nations to Investigate Racism in the U.S.

“Responsible nations must not shrink from scrutiny of their human rights record. Rather, they should be transparent with the intent to grow and do better.” 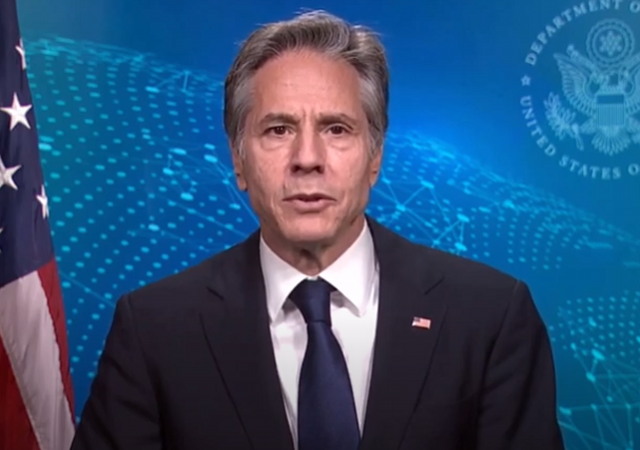 Democrats, specifically members of the Biden administration, frequently insult the United States of America by claiming that our country has a problem of systemic racism.

The only thing that could be worse is for them to invite a corrupt, hypocritical body like the United Nations to investigate those claims.

They did just that.

Matthew Lee of the Associated Press:

US invites UN’s racism and human rights envoys to visit

The Biden administration is formally inviting United Nations racism and human rights envoys to visit the United States amid a contentious ongoing domestic debate over the treatment of minorities in America.

The State Department announced late Tuesday that the administration would issue a standing invitation to all U.N. envoys, known as special rapporteurs, who compile information on race and discrimination and report back to the world body.

Secretary of State Antony Blinken also welcomed the adoption of a resolution by the Geneva-based U.N. Human Rights Council to address racism directed against Africans and people of African descent.

In a statement, Blinken said President Joe Biden’s administration “is deeply dedicated to addressing racial injustice and inequities at home and abroad.”

He said the administration would “lead by example” on the global stage by allowing international scrutiny of its own issues and publicly confronting them.

Responsible nations must not shrink from scrutiny of their human rights record. Rather, they should be transparent with the intent to grow and do better. That is why I'm announcing a formal invitation for @UN Special Rapporteur on contemporary forms of racism to visit the U.S.

There are countries where slavery still exists, and China has people in concentration camps, but the UN is coming to America to investigate us?

It's disgraceful that President Biden and Secretary Blinken have invited the UN to our country to review human rights abuses.

Why isn't the UN concerned with the genocide in China? pic.twitter.com/Nc8ZO7HKRD

Blinken was also called out in a recent editorial from the Wall Street Journal:

Mr. Blinken rightly says “great nations such as ours do not hide from our shortcomings.” But the U.S. doesn’t hide from its shortcomings: All across America, citizens and legislators are debating policing, while the Minneapolis cop responsible for George Floyd’s death was convicted of murder and sentenced to more than 22 years in prison. By contrast, will any of the police now cracking heads in Havana ever be held to account?

It’s easy to write Mr. Blinken’s remarks off as naive. But they are dangerous. They come at a moment when China is committing genocide against its Uyghur minority, when Cubans are risking their lives to claim their freedom, and when Moscow has jailed a man walking around Red Square in a T-shirt saying “Freedom for Navalny,” a reference to imprisoned opposition leader Alexei Navalny. The leaders in these unfree nations are all taking President Biden’s measure.

Perhaps while the UN is here, they could look in on the American citizens the Biden administration has been holding in solitary confinement for months without trial over January 6th.

If we were really a racist country, we’d be the head of the UN Council for eliminating Racism.

If the U.S. was a racist country, the vile narcissist-incompetent and empty-suit, demagogue-hustler, Obama, never would have been elected President, twice. An obese black woman named “Oprah Winfrey” never would have become a billionaire. And, dumb, semi-literate, sanctimonious basketball players, such as LeBron James, also wouldn’t become billionaires, or, near-billionaires. Black Americans have risen to the top of every profession.The accusation of “systemic racism” in the U.S. is as manifestly fallacious and farcical, as it is easily disproved.

Start at the divisive regime in the WH.

That is the location of the most racist of the racists in the US!

I hope they headquarter the UN folks in DC. It would be nice to limit the rape damage.

Another tug of the curtains revealing even more of the d/progressive world view.

Is it shark week? Maybe that’s why they seem to be one upping each other in jumping the shark?

We’ve got the “deep state” and also the “rogue shadow government” called the State Department, and of course the bastion of socialism England entrenched in both of the former anti-liberty cabals. … All need to be reined in. … Let’s begin by focusing the “People’s” enmity on England. It’s a failed empire, should not have influence in America’s governement and offers the American People nothing; as anyone who has ever worked for a Brit or a british company knows.

Start with “if you don’t vote for me you ain’t black/they gonna put y’all back in chains” Biden.

If someone trespassing in Nancy Pelosi’s office and putting his feet on her desk is “insurrection”, then what the hell is this?

Blinken was confirmed by the entire Senate 78-22. That means a majority of Republicans voted for him. In an allegedly 50-50 Senate the Biden* nominees are almost always getting comfortable margins courtesy of the GOP.

I wonder how many of the Franz von Papen Republicans who voted for Blinken are now pretending to oppose this latest Biden* administration quackery. Republican Failure Theater (TM) is getting to be such a bore…..

Republicans spend too much time doing the “honorable” thing. They need to be a little more like the Democrats who believe in the Shove It Up the Ass of Every Republican thing!

Let’s resign from the UN and then kick them out of the USA!!!

“Send in the Clowns”, part deux. Literally. Meanwhile, Winken and Nod are pissed that Blinken has been ignoring them and not showing up for date nights.

This apparent male figure is an American Sec-State?

All the things Blinken is, first and foremost he is a pussy.

This is another indication that literally no one is in charge of this country. Each Department and even agency heads say whatever they want without check, hire whomever they want regardless of ethics or job requirements, and establish policy without regard to any other national objective or even law.
Biden and Harris are absolutely incapable. Frankly, I don’t know who Harris even became an attorney. She is stupid, ill-tempered, and behaves like a loon.

“Each Department and even agency heads say whatever they want without check, hire whomever they want regardless of ethics or job requirements, and establish policy without regard to any other national objective or even law.”

It is true that government bureaucrats do pretty much whatever they want regardless of the law. But they are (sort of) melded together in a Borg-like unity that pursues a single worldview. The problem for us is that worldview is Communism.

In their pursuit of power these agencies will sometimes step on each others’ toes or cross each other up, but they pursue the goal of Communism with increasingly amoral, violent tactics. The FBI and ATF have a history of slaughtering people who get in their way, the military is being repurposed to make war on “domestic terrorists” (read: American citizens), and BLM/Antifa operate as quasi-government enforcers of Communist ideology.

As Judge Joe Brown said, she ‘f—d her way to the top’.

That’s probably how she got through the steps to become a lawyer.

Great idea! Let’s start investigating human right abuses in the US with a look at Biden keeping political prisoners locked up indefinitely w/o parole on spurious charges!

Oh that’s easy. Obama had that one worked out back in the day. You just declare those being unconstitutionally imprisoned either “domestic terrorists” or “enemy combatants” and then all bets are off. No charges need be articulated. No legal representation need be provided, No bail. Not even a trial. Just amazed they haven’t been sent to Gitmo at this point.

Right. Let’s let some of the most racist authoritarian totalitarian America hating nations on the planet critique racism in America.

That can only make sense on to a Marxist. And a traitor.

Next, UN troops will be invited in. You’ll see.

And lest we forget: impeach Biden.

How do you impeach a president that wasn’t lawfully elected nor sworn in. And even if it happens that leaves us with Kamala Harris. And I’m sure she’d be no better, and possibly much worse, than Slow Joe.

Once we get the House, we impeach her, too. The left showed the way.

If we don’t play as ruthlessly as they do, they”ll enslave us.

That insane general Miley needs to be dragged before the Senate. But don’t look for a rat like mcconnell to buck the swamp. He’s part of it.

Would those be the same “UN troops” that are regularly accused of rape and sexual assault and other human rights violations? I can hardly believe that they’ve effectively stopped such abuses. But could be wrong.

Bring them in. Blue helmets cover the greatest bunch of rapists and abusers alive. The first words out of any UN troop is ‘WHERE DA WHITE WOMEN AT?”

Would this be the same “UN” that has some of the worst human rights abusers on their so- called UN Human Rights Council? Just asking.

Guess what? I am a nice Episcopalian boy who actually cares about the culture, knows it’s source and is willing to exert himself to preserve what made America great.

So being slightly below the Mason-Dixon Line, my church building actually has a stained glass window featuring….are you ready….Robert E. Lee on his knees in prayer. This seems to be causing pain. Actually I am not unsympathetic, but there aren’t any racists in the church and the local KKK doesn’t rally around the window. I don’t think there is much to be gained by removing the window.

I did some research and found out many amazing things, the two best being:

1) FDR…..yes that FDR… personally dedicated a statue of RE Lee in Dallas in 1935 and proclaimed him to be one of the great Christians of the era. Ohhhh the humanity!!!!

2). RE Lee was due a pardon after the Civil War, but the State Department screwed up his paperwork. It was discovered in 1970. In 1975, the Senates voted unanimously and the House by about 400 to 10 to restore Lee’s citizenship and basically pardon him for any misdeeds associated with the War/Secession. President Ford signed it. Guess who was in the Senate and voted to restore Lee these 46 years ago? That’s right. Joesph Robinette Biden, Jr.

I believe that I will meet that UN commission at the airport and ask them to raze the FDR memorial and throw that ray is Biden out of the White House.

Let me guess, Winken and Nod will co-chair the “investigation”!

This is part of Biden’s “China First” policy. It will embolden China to claim that the US treats its minorities worse than China does in its detention camps.

Getting the world’s Socialists and Marxists to come help the Amerkan Bolsheviks get control of the population is their plan.

Why isn’t this guy dragged before the Senate???????

The U.N. investigators should start their inquiry by seeking answers to the question of of why If the U.S. was founded upon and operated with unredeemable & systematic racism against black peoples, it is the best place in the history of the planet for black people at the end of the day, where almost none chose to leave and millions line up to get in here?