According to NBC News, “[Editor-in-chief Jeffrey] Goldberg has privately expressed fear that Powell Jobs and her organization, Emerson Collective, might pull the plug if the magazine doesn’t reach profitability within the next four to five years, Atlantic sources said.” 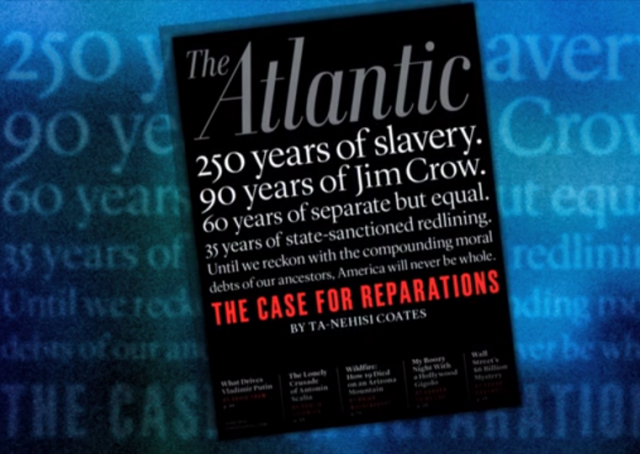 The Atlantic publication has been around for 164 years in differing forms. They’ve been able to boast an impressive array of authors and contributors in that time, including Ralph Waldo Emerson (one of their founders), Harriet Beecher Stowe, Teddy Roosevelt, Booker T. Washington, Ernest Hemingway, and Martin Luther King, Jr.

They’ve published various pieces from authors on the left, the right, the center over the years. But in the past decade or so, The Atlantic veered off into a more sharply left-wing direction, endorsing Hillary Clinton in 2016 – only the third time they’d ever endorsed a presidential candidate.

The publication brought on a stable of hard-left authors that helped further propel them into the national spotlight at various points. These authors includePeter Beinart and Ta-Nehisi Coates, the latter who became a liberal icon and media darling after his controversial 2014 “Case for Reparations” article was published (Professor Jacobson dissected the piece at the time here).

But a new report from NBC News suggests The Atlantic is in deep financial trouble. It noted that despite substantial subscription numbers in 2020, thanks in part to their coverage of then-President Trump and the COVID pandemic, they still lost $20 million and are projected to lose $10 million this year:

Nicholas Thompson, the chief executive of The Atlantic, gave a presentation to employees last month in which he disclosed some uncomfortable truths about the state of the magazine.

Subscription growth, which had skyrocketed in 2020 thanks to the Covid-19 pandemic and the presidential election, had come back down to earth. For the first time, the number of subscribers had plateaued and started to slightly decline. And even with last year’s substantial surge, the magazine had lost more than $20 million and was on track to lose another $10 million this year, according to slides of the presentation shared with NBC News.

But Thompson was optimistic, according to four employees who saw the presentation and spoke on the condition of anonymity. The company would lose just a few million dollars in 2022, Thompson projected, and turn a small profit in 2023. When that happened, he said, every staff member would be given $10,000 or a 10 percent salary bonus — whichever was bigger.

One issue they’ve come up against is how to keep their new subscribers and bring them in post-Trump. Since Trump left office and Wuhan coronavirus case numbers have been on the decline, the magazine has only seen a fraction of new subscribers in comparison to what they got last year:

The Atlantic needs to make $50 million in annual subscription revenue in order to break even, according to Thompson. Hitting that target has become more complicated since Trump left the White House and the pandemic let up. New subscribers are coming in at about a quarter of the rate they did last year (10,000 a month, on average), and the magazine faces challenges keeping some of its existing audience, which may have less of a need for The Atlantic’s journalism in a post-Trump, post-Covid world.

The Atlantic was one of several left-leaning publications last year that had to cut staff, reportedly due to loss of ad revenue during the pandemic:

But on Thursday the 163-year-old publication announced that it would lay off 68 employees, or 17 percent of its staff, evidence that even the most robust media businesses are vulnerable to the crisis that has ravaged news organizations nationwide.

The announcement followed a burst of layoffs in the news media business last week: 155 jobs lost at Vice, 100 at Condé Nast, 90 at The Economist, 80 at Quartz. The cuts at those companies and publications came in the wake of a free fall set off by the coronavirus pandemic, which has cut deeply into advertising revenue.

Editor-in-chief Jeffrey Goldberg allowed NBC News to interview him for the piece. However, he balked at the claim from Atlantic sources that he was worried that Laurene Powell Jobs – who is now the majority investor of the publication – “might pull the plug if the magazine doesn’t reach profitability within the next four to five years.” Goldberg told NBC News that “I think Laurene is an excellent owner who is in this for the long run.”

Maybe so, but according to other NBC News sources, she invested in The Atlantic, not as a philanthropic experiment but “in part to demonstrate that there can be a sustainable model for journalism if you invest in it.”

“Goldberg has privately expressed fear that Powell Jobs and her organization, Emerson Collective, might pull the plug if the magazine doesn’t reach profitability within the next four to five years, Atlantic sources said”

In private conversations, Laurene Powell Jobs has referred to herself as a “generational leader” of The Atlantic. She meets with its leadership frequently and has professed a love of its journalism. But she isn’t willing to cover its losses forever, sources close to her said. https://t.co/UNhNYxU1Vc

Worth mentioning that the Atlantic was turning a modest profit of about $10 million when Emerson invested, which flipped to a $20m loss as it expanded https://t.co/JplhLbyqS3 https://t.co/sxYAVCPKGk

Whether or not The Atlantic ultimately proves to be financially sustainable remains to be seen. But considering their goal of reaching a million subscribers (which is where “the bulk of new revenue will have to come from,” according to CEO Hunter Thompson) anytime soon is increasingly looking like a pipe dream (right now their subscriber numbers stand at 750,000), it’s not looking too promising.

If there is any justice in the world it never will.

Businesses should never piss off half the population, That is what Atlantic has done. I am looking forward to seeing them dry up and blow away.

She’s kinda like gigolo John Kerry – but even Kerry made it to the Senate without his rich wife (who also did nothing to gain her wealth, other than marry into it).

They know they can’t make money telling the truth to Progressives.

But now we see they can’t even make money with lies.

The owner, Emerson Collective, doesn’t have to wait for “four of five years” to see if Atlantic might make money. PULL THE PLUG NOW and save $10+ million.

As long as they are useful, someone will pump money into the Atlantic. It’s all for the cause.

Every once in a while, I click a link to something on the Atlantic before realizing the destination. Everything I find is “New Journalism.” You know the kind of thing. It starts out with something like, “I drove into the noonday sun, wondering if the pain from the light in my eyes was worth the interview I was about to do …”

Garbage. Let it all burn.

Sounds like it needs some NPR sound effects, maybe of a trickling stream–or a grinding garbage truck.

If I want to see what the anti-American side is saying, I go to RT. Generally better, more thoughtful and unabashed as to their positions.

I’d like to feel bad for them, but I just don’t. This is what happens when you put essentially all your eggs in a basket named “Trump”.

The source of this story is NBC, which should never be taken at face value.

To me it stretches credibility to the breaking point that the murderous hate the Atlantic pedals could sell so well in one year and so poorly the next. This drop off (if it really exists) might be caused by any number of things NBC wants to conceal. Lousy marketing, too many overpriced hacks on the payroll, sexual harassment payoffs, embezzlement, loss of one or more sugar daddies who keep the rag afloat, accounting gimmicks designed to conceal the real trouble – those are possibilities, and to me more believable than the lame-o “election is over” alibi.

Again I stress: don’t take ANYTHING that NBC says at face value. Ever.

That being said, remember what happened to Newsweek?

“The Atlantic” is not viable? Abort it, cannibalize its profitable parts, sequester its carbon pollutants. Karmic justice.

Please crash and burn. Same with the WSJ. Subscribed to that newspaper for almost 35 years. In the last ten, it started to look like it reprinted their stories in the Washington Compost. I have dump all print newspapers and glad I kicked the WSJ out of my house. Their connection to GPS Fusion is damning.

Epoch Times is starting to print, in some places.

Yea, been reading that. My father had a subscription to it. Has a WSJ look and feel to it, but they too have a lot of fluff stories. I am getting sick of New Age BS. I want to mainline good news. Disclose.tv and Revolver are pretty good for that. I only get like 50 emails from them a day.

Hopefully it doesn’t make it at all.

To The Atlantic: The cliff is to port. Steer hard left.
.

Interesting. But could have been more informative if it included some understanding of how the Atlantic’s readership demographics are changing, as opposed to just discussing the editorial shift.

Regardless, my sense is the Atlantic’s style and articles are historically too long and tedious; they read like short stories as opposed to in depth analysis.

But, why discourage Powell-Job from “pissing away” her ill gotten wealth ? … There’s a multiplier effect and thus it benefits the economy.

There’s only so much market for self hating, d/progressive, upper middle and upper class women who feel guilty about getting their kids into a good school and their country club membership.

Not guilty enough to drop the membership or put their kids into public school though. Oh heavens no. Instead they subscribe to the Atlantic and watch CNN or MSNBC and strut and posture their support for CRT/Equity in our children’s schools, not theirs, as a form of penance.

“… public school …” ? As in “‘birthing the Child’ was not enough” … “I should be involved in their ‘education’ ?” … “My husband and I do not have time for that. Which is why he works so very, very hard (as did my (his) parents) that our children might qualify for the very best schools.”

“according to CEO Hunter Thompson”

Well, that explains it. The dead have no interest in profits.