Comes soon after statues of Queens Victoria and Elizabeth II torn down in Winnipeg. 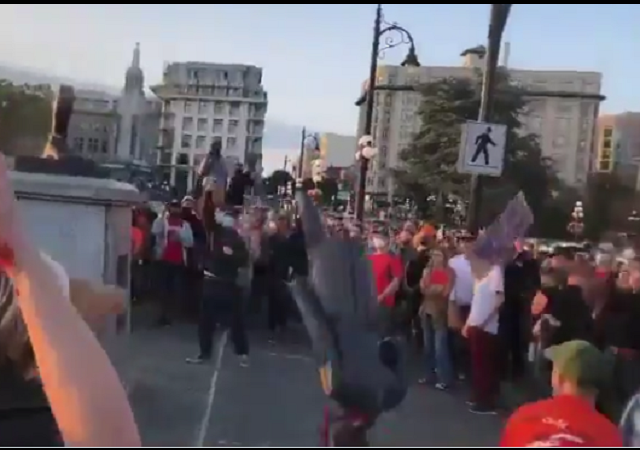 On Friday, Mary blogged about the statues of Queens Victoria and Elizabeth II being torn down, the former statue decapitated.

This is Captain Cook in Victoria, British Columbia, torn down and thrown into the sea. See how this is not about Residential Schools. It's anything British. It's Canada itself. pic.twitter.com/QQF5vbxArq

A large crowd gathered around the Capt. James Cook statue at Victoria’s Inner Harbour on Thursday night and pulled it down from its base, leaving behind a portion of a leg. The statue was tossed into the harbour.

. . . . Members of the crowd smeared the pedestal with red hand prints.

In the statue’s place, they erected a wooden red dress, a symbol representing murdered and missing Indigenous women.

People had thoughts, of course.

The new warriors. Cheering and high fiving themselves for pulling a statue down as if they landed on the beaches of Normandy or took Iwo Jima. What courage!

In a couple of months this will lead to a "Change the constitution" trending topic. Check what happened in Chile.

Silly people. You really thought it was about Confederate statues in the American South. Purging never stops once it starts.

In apparent retaliation for these outrages, a wooden totem pole was set on fire.

A native totem pole was set on fire on Canada’s Vancouver Island in what is suspected to be retaliation for the destruction of a statue of Captain James Cook.

The Salish Bear Pole was seen smouldering at the summit of the Malahat Highway hours after a mob ripped down a statue of the British explorer in the provincial capital of Victoria, took off its head, and “drowned” it in the Inner Harbour.

The fire brigade were able to bring the fire under control, leaving the totem largely intact but its lower sections charred and blackened.

“This was a very dangerous act that could have had far reaching consequences. We will be working with partners along the Malahat for video and dashcam footage in an effort to identify suspect(s),” he added.

“Fresh graffiti was also located at the scene, speaking to recent events in Victoria where a statue of James Cook was pulled down and thrown in the Victoria Harbour, based on what was written, we feel the two incidences are related,” the policeman said. The words ‘ONE TOTEM – ONE STATUE’ had been scrawled in front of the burning totem in black spray-paint.

What has Canada become?

Re the burning totem pole:

Important life lesson that Canadian nutjobs can’t or won’t learn: what goes around comes around.

We don’t learn much either. If we had a totem pole in America Obama would be on the bottom claiming to be a founding father, Biden would be in the middle claiming to be a centrist and Kamala would automatically rise to the top by the power of suction.

Soon we may need to start defending what was formerly the longest undefended border in the world and in human history.

From insane, frothing at the mouth, spittle spewing radical lefties.

There’s 40 miles of salt water ‘tween us and the Canucks on Vancouver Island. And the border remains closed. The MV Coho / Black Ball Ferry between Port Angeles and Victoria has been docked since the start of Covid, as far as I know. Wonder if the protesters will mount an attack on the wax museum? Lots of figures they’d likely despise there. http://www.greatervancouverparks.com/WaxMuseum01.html

Shows ya what I know … wax museum in Victoria closed in 2010. Owners couldn’t afford gov’t mandated seismic upgrades to the building. Probably the same nincompoops who put up all the tsunami warning signs on the US side of the strait.

Sorry but they are already here.

So just tear down all of the statues and be done with it. They aren’t anything but pigeon targets anyway.

Canada is a socialist shithole. Used to be a fun visit, now it’s just a big prison camp run by fascists.

And….how do the authorities know the totem pole was burned in retaliation?

Perhaps we should wait for a suspect(s) to be arrested and evidence provided before we jump to the conclusions the Joseph Goebbels media wants us to jump to.

Because they want to make it look like it isn’t just one group doing all the damage.

Right now there is a push to get federal legislation through that would essentially criminalize any form of speech that isn’t considered acceptable by the government. Sheesh, one of the people heading up Nova Scotia’s CD-19 effort flat-out admitted they’re banning indoor gatherings in the province to prevent “misinformation” being spread. Pinning the burning of the totem pole as “retaliation” is a way to make it look like there are dangerous right-wingers and wrong-thinkers who need to be stopped. The people wreaking the havoc, not so much.

It’s okay! Their sitz-pinkler Prime Minister Trudeau says he understands their frustration. It’s time for manly men of honor to return to the fight. The kind of men that didn’t have to walk through their basic training. The androgynous new world of amoral anarchy just isn’t working out. And everyone thought installing lights in Wrigley Field was a bad idea!

The next thing to do after tearing down our statues is to burn our history books.

It’s going to keep on happening because nothing is being done to stop it and everyone knows it.

In Quebec there’s been a long-standing joke that oh, it’s summer, time for the indigenous people to shut down roads and railroad tracks for weeks to protest something, just because they can. This year, though, and certainly encouraged by what has been seen down here over the past few years, the tactics have changed and gone nationwide.

Airlift the protesters to Nunavut.