The office photoshopped two handicapped people into the photo. 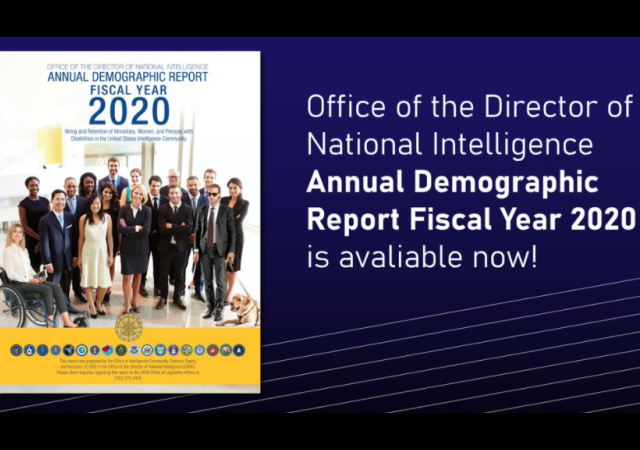 This is not The Onion or The Babylon Bee.

The Office of the Director of National Intelligence used a stock photo on its annual demographic report.

It gets worse because someone photoshopped a woman in a wheelchair and a blind man into the photo.

You can download the photo, named “Portrait Of Multi-Cultural Office Staff Standing In Lobby,” on Shutterstock for free.

The press release states the “report presents key data and efforts addressing diversity and inclusion across the IC.”

Then why not take a picture of your diverse workforce? OK, say it is normal for them to use stock photos. But why photoshop two handicapped people in it?

Can’t someone do a better photoshop job, too?

The Worst using of photoshop for the year: For the cover of its diversity report, ODNI bought a stock photo called "Portrait Of Multi-Cultural Office Staff Standing In Lobby" and then photoshopped a woman in a wheelchair and a blind guy into it. pic.twitter.com/e2tObbToeo

This D and I is as phony as anything else the regime does. It’s more kool-aid for the low IQ.

THIS SUMS IT ALL UP

So far – style is winning.

Winning as in getting crowned Miss Congeniality, right? 😉

It worked for the Soviets for years. You can add and you can take away……………

And this cartoonish propaganda site thinks the “leckshun wuz stoalun!!!”

No…. But some of your comments make
Me think perhaps some parts of your brain were stolen..

Aw come on Doc, those parts might never have been there to begin with.

Using an ‘everyone who opposes me, or I think opposes me’ is a”hick trope” on a site run by a Cornell law professor, with degrees from Harvard and Hamilton;and whose staff is educated and informed is absurd.

But I suspect they are immersed in incongruent absurdities on a daily basis, if they think at all about the whole of what is embraced by their tribe.

When you watch cartoons at home do you yell and shout nonsensical statements as well or do reserve that behavior for public venues?

Asking for a friend who specializes in involuntary commitments.

“Involuntary Commitment “. Sounds like a fancy name for “shotgun wedding “.

Wedded to nurse Ratched for the duration of his confinement. Works for me.

Love how liberals think anyone who disagrees with them are uneducated bumpkins. Tell us where this cartoonish propaganda site hurt you….

Oh wow! Just love your posts. I read them over and over. I can hardly wait for you to post again.

Good thing you’re posting here. We may have gotten to you in time:

I see you’ve been using too much veneer shlickem on your wiener toobin.

This from the guy who thinks Trump stole the 2016 election with help from the Russians.

Yet another infantile, dim-witted, narcissistic, obnoxious, self-reverential and totalitarian Dhimmi-crat. One whose net worth is less than his IQ. I’ve seen squirrels who possessed more intelligence than this twit.

The Onion was on to photoshopped diversity several years ago.

The blind guy is real amateur hour. It must have been an affirmative action person who inserted him.

Yes, his job is to read Hillary Clinton’s emails.

I wonder if the thought ever entered the foolish minds of these “diversity is our strength” ideologues that their advocacy of diversity will lead to one mono-race of sameness, whereas the conservative philosophy would have maintain the diversity.

Nothing demonstrates an organizational commitment to diversity quite like a downloaded stock photo of people that are not employed by the organization.

Except perhaps the addition to that download the Photoshop images of even more persons with no connection to the organization.

Lets avoid adopting the definition of “Diversity” that the National Democrat Party Intelligence Office uses. According to them a Pole, a Jew, a Russian, a Frenchmen, a Greek and an Armenian are all exactly the same.

Is it laziness, or the stupidity of an affirmative action hire? Or arrogance? Or all of the above?

My experience is mostly just lazy.

Are these percentages worthy of boast?

If you’re going to Photoshop, at least do a believable job of it. The shop of the blind dude is laughably bad, with the lighting on him totally different than the others.

His job was to review Hunter Biden’s laptop for crimes.

Well, look, I’m sorry, but the explanation is something completely different.

The last thing they’re going to do is to take a real photo of real people who work there, and then doxx them by putting them on the cover of a publicity pamphlet. It makes them targets. It just isn’t done.

So yeah, I can see them using an illustration of a bunch of generic professional models. Adding two disabled people to the photo is tacky, but as long as you’re lying anyway, in for a dollar.

And yes, they made a big point of “we improved our diversity numbers” in the text, but that same text would have been there even if the cover had been a featureless geometrical design. It’s not like they said, “as you can see from our photo on the cover.”

Yeah, viewed as a whole, the exercise is tacky as Butters when Cartman catches him sleeping, but their motives were coming from somewhere else entirely — spook paranoia.

Everything promulgated by the vile, narcissistic and totalitarian Dhimmi-crats is artifice, lies, theatrical props and stagecraft. Designed to propagate a fallacious and self-serving narrative.