It’s almost like the more ridiculous and ludicrous the Democrats get, the more Americans tune out. 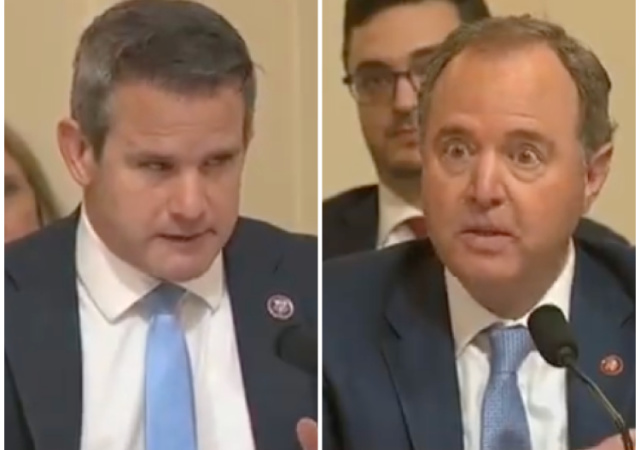 Nancy Pelosi’s latest clown show—replete with weeping United States Representatives—isn’t riveting the nation; indeed, according to a new poll by Morning Consult, Pelosi’s January 6 hearings aren’t on the radar of any but the already faithful.  Hilariously, Morning Consult notes that the panel “is largely preaching to its own choir.”

The poll was taken on July 28-29 and specifically addresses the hearings (archive link).

But outside of the nation’s capital, a new Morning Consult poll suggests that the panel — whose members were appointed by House Speaker Nancy Pelosi (D-Calif.) — is largely preaching to its own choir, as relatively few Republican voters viewed or listened to the daytime hearing and even more are seeking to disassociate their party and its leader from the deadly riot.

According to the July 28-29 survey, less than half of voters (49 percent) said they tuned in to at least some of the hearing live, with 1 in 10 saying they watched it in full. Three in 5 Democrats said they caught at least part of the 3.5-hour session live, while 39 percent of Republicans said the same. 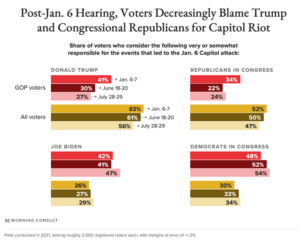 It’s almost like the more ridiculous and ludicrous the Democrats get, the more Americans tune out.  Weird, right?

Morning Consult concludes that Pelosi’s partisan (notwithstanding the presence of Pelosi-approved nominal Republican Reps. Adam Kinzinger and whatshername Cheney) clown show better deliver the goods because so far weeping and wailing Congressmen and the histrionics of Capitol police—who know who signs their paychecks—are not working.

The survey found that 56 percent of voters said the 45th president is at least somewhat responsible for the mob of his supporters who stormed the Capitol, down 5 points since a survey conducted last month. Those trends indicate that unless the panel, which is armed with subpoena power, is able to unearth some new information about Trump’s conduct as it relates to Jan. 6, perceptions of his culpability for the riot have likely already hit their high-water mark.

The drop in the share assigning blame to the former president has chiefly been driven by Republicans: Twenty-seven percent say he is at least somewhat responsible, down 3 points from last month and a 14-point drop since immediately after the Jan. 6 riot. Since June, the share who blame Biden increased 6 points, to 47 percent, and even more blame Democrats in Congress (54 percent) and Pelosi (59 percent).

The American people are just exhausted by Pelosi’s haranguing shrew impression and by the Democrats’ all drama all the time, everything’s a crisis, and we’re all going to die messaging.

Even before House Democrats’ latest descent into partisan lunacy, people were already tuning out.

Among Republicans and independents, support for a congressional investigation into the events of Jan. 6 is plummeting just as Democrats are gaveling in on the first hearing of the select committee on the Capitol riot.

A new Politico/Morning Consult survey found that 52 percent of Republicans are against a congressional probe, up 9 points since June. Likewise, independents reported their support for it has dropped 13 points, coming in at 52 percent approval.

These numbers jibe with two polls last week, one from CBS News that found the number of Republicans who “strongly disapprove” of the Capitol riot fell from 51 percent to 39 percent, with most shifting to “disapprove somewhat,” and a Rassmussen Poll that reported 66 percent of Americans want investigations into last summer’s Black Lives Matter protests that descended into riots, while only 49 percent approve of House Speaker Nancy Pelosi’s Jan. 6 select committee.

That trend appears to be continuing apace.

Face it, the TV audience for the 17th stanza of “The Bad Orange Man is Bad” chorus just ain’t what it used to be.

Especially with that Old Gray Mare in charge.

It’s all kind of pointless.

Oh, it’s very pointy. The goal is at least two-fold: to gin up Americans for a domestic war on terror and to prevent Trump from running/winning in 2024. One thing stands between Democrats and their dream of one-party commie rule for time immemorial: the American people. Trump was our voice, so they want to silence him and to disgrace him, and they want to silence us through the power of the state and its hold on Big Tech and the Democrat propagandist media.

They want to believe we are nothing without Trump, so they seek to destroy him with these hearings, but they also know that we were all here before Trump hit the scene, and that we are dangerous to them, to the dystopic DIE nightmare they wish to inflict upon our great nation and her people.

So no, they won’t do the right thing, and there will be no inquiry into Pelosi’s / the FBI’s, / antifa’s role in the events at the Capitol. Instead, Pelosi and her ever-present tears of a clown clown show, kabuki theater drama will try to use this to further justify the Democrats’ war on middle America (i.e. “white supremacists” and “terrorist insurrectionists”). That’s what this is about. And it’s not nothing.

I disagree. I think there is exactly one and only one goal: To raise money. “See! We fought back against the evil Republican Trumpist scourge! But we need your help to continue fighting …”

Aw, that’s so cute! You think that these divisive, destructive, anti-American, anti-capitalist , anti-Constitution, Green New Deal commie zealots are cuddly little pols who just want a buck. So cute! I think it might be best if you sit down. Just for now, until the rest of us fix this mess.

Money is part of it but that’s a secondary or tertiary goal. This is about Pelosi jamming a sharp stick into the eyes of r in general and DJT in particular because they can.

They benefit from media attention and more articles and commentary about the ‘insurrection’ that keep the narrative in the news. They appease their base and keep them energetic for the midterm.

So it’s primarily about the exercise of power in an act of punishment. The added benefits include fundraising.

Forgive me but I think you forgot Pelosi’s #1 reason for this is revenge and a desire to inflict harm on people she hates (so same motive as Liz Cheney).

I also don’t think she fears Trump running again, note how the witness (in addition to perjuring himself nobody used the N word that is something that would have been shown to the public and played non stop if it happened) launched an attack far wider than Trump. Pelosi will occasionally shout Trump for Democrats who would otherwise find her behavior revulsive but people like us any Republican she could make life hell for are her intended targets even if they turn out to be nobodies.

Start with the basics…who shot Ashli Babbitt? Proceed from there….

Or, how come some men instigating the crowd to be rowdy and enter the capitol were never arrested or even searched for?

Dan Bongino has been focusing on the real violence on Jan 6: the evacuation of the White House as the violent Antifa mob was attempting to storm the building. He is promising more to come when his Secret Service friends give him the go-ahead to talk. He and his wife were there and had to be rescued from assaults. THAT is the real story of Jan 6.

Instead of showing the same carefully selected and edited few minutes of video the Regime should let us see all of the video.

Release all of the tapes/video. All 14,000 hours of it. AKA, the truth. Let the American people see the truth.

How can we possibly view 14,000 hours in any reasonable time frame? It will be easy for a few people to FF (x64 or so) thru the parts with no ‘violence’. My guess is it wouldn’t take very long at all.

My guess is the little we are shown over and over by the Regime and its Dem-media propaganda complex is about all the ‘violence’ there is to be found in the 14,000 hours of video.

What we would see is a hundreds or thousands of hours of video of people peacefully entering the Capital building and then wandering and looking around — almost as if they were tourists — while hundreds of Capital Police officers are standing about doing nothing.

That’s another thing. The video evidence won’t be “ready” until sometime in 2022. So we are talking about people being held in captivity without trial for possibly more than a year.

The whole exercise, from January 6 to this “hearing”, is nothing more than Soviet style kabuki.