The lawsuits come from people in healthcare, the state government, and. school district: “I see a racist and divisive ideology of race essentialism taking over our nation and my institution.” 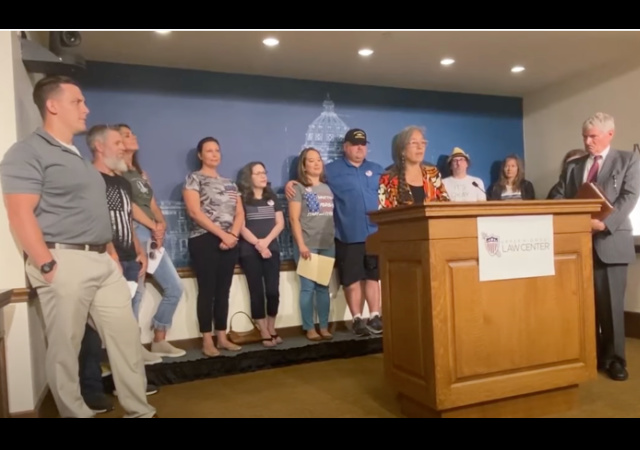 Alpha News reported the Upper Midwest Law Center in Minnesota is representing a handful of Minnesotans in their fight against Critical Race Theory training.

The people in healthcare and the state government must “present their claims to the U.S. Equal Employment Opportunity Commission before proceeding with the lawsuit.”

The law center filed a lawsuit against the Lakeville Area Schools in federal court this week.

Tara Gustilo served as the OB-GYN chair at Hennepin Healthcare System, but got demoted after she spoke out about the CRT “saturating her organization“:

Gustilo, a Filipino-American doctor, discussed the rich diversity of her background at Monday’s press conference.

“It’s with a heavy heart that I’m bringing this lawsuit forward. My reasons for doing so are similar to my reasons for speaking out in the first place,” she said. “I see a racist and divisive ideology of race essentialism taking over our nation and my institution. Further, there seems to be this growing intolerance for people with different opinions or ideas and it seems that this tribalistic ideology is fostering that kind of intolerance.”

Gustilo started a program to help others “better understand the varying traditions and cultures of the diverse community” around them. CRT took over:

“However, I noticed that members of the department instead began to transform the program from one that simply sought to respect and appreciate the various cultures to one of segregated care based on race,” she writes in her complaint.

Gustilo also objected to her department’s public support of a Black Lives Matter event, a group she opposes because of its advancement of CRT. The event also violated HHS policy against affiliating with political groups, she writes.

A third element of her complaint alleges that HR and “the medical executive team” took issue with some of her anti-CRT Facebook posts, which they said hindered her “ability to lead.”

Gustilo did not appreciate that her colleagues assumed she would embrace CRT since she is a minority.

Native American Joe Norgren claims he had to retire after 27 years at the Minnesota Department of Human Services because he refused “to subscribe to CRT and abandon [his] religious beliefs”:

Norgren, a Native American, was required to participate in a training on “How to be Anti-Racist” and another called “Understanding Gender Identity and Expression.”

He participated in the first training, which taught him that America is the “source” of “racist ideas,” but asked for a religious exemption to the second. His request was denied.

Norgren claims that he faced similar religious discrimination in October 2018 when his supervisor asked him “how many genders existed.”

“While I felt uncomfortable answering, because he was my supervisor and I was on shift, I responded that I believed there were only two genders and two sexes, based on everything I read and researched on DNA and biology,” he writes in his complaint. “As we continued to discuss and disagree on this topic, he told me I could be fired for the way I think or talk.”

Like Gustilo, Norgren accused his superiors of discrimination because they “attempted to indoctrinate me with the views and theories on race that they believe I should subscribe to as a person of color.”

According to the lawsuit, the school district launched an “Inclusive Poster Series” in April that included displays with the “Black Lives Matter” slogan.

“At Lakeville Area Schools, we believe Black Lives Matter and stand with the social justice movement this statement represents. This poster is aligned to School Board policy and an unwavering commitment to our Black students, staff and community members,” read a caption underneath the posters.

District taxpayers like the Cajunes reportedly asked for alternative ideological viewpoints to be presented alongside the posters. They were told that the district “does not approve of All Lives Matter or Blue Lives Matter posters in the classrooms or other areas of the school, and teachers/school staff are not allowed to wear shirts with these sayings to school.”

There’s nothing wrong with critical race theory except that it wants to be the only voice in the discussion.

Say anything you think is true but then defend it.

That’s actually not true. Another thing basically wrong with critical race theory is its claim of systemic racism. Which in non-falsifiable. You either believe it or you don’t. It has all the qualities and stature of a pseudo-religious belief.

Well they’d have to defend it, is all. I say it’s phlogiston, the cause of fire. Fires exist, hence phlogiston exists. It’s called a reification error.

In this case systemic racism is the cause of blacks not doing as well as whites. I’d say it’s an average IQ of 86, and it’s cover to avoid noticing that at all costs.

But that’s what they’d have to defend against.

They’ve been making that same claim for decades and they’ve never had to defend it. When called on to do so, the goalposts get moved, or the person asking the difficult question is smeared as a racist.

And if they do defend it to your satisfaction, then what? Allow its principles to rule over us? You find nothing wrong with in-your-face racism and Marxism?

The core of CRT is judging people on the basis of their race. This is racism and always evil. It’s the Democrats returning to their racist roots.

Yet the Liberal media, and others in the propaganda-industrial complex, have brainwashed most people to believe Republicans are racist. If I say a word outside the Liberal talking points – my college age kid warns me that I “sound like a racist”. I reminder her that I was a Democrat until about the time she was 14. She also thinks Tucker Carlson is a racist but she cannot point to any example of him saying or doing something racist.

There is an effective campaign to brand all opposing views as “racist” or “insurrectionist”. I always thought that the truth prevails – but developments in the last few years have caused me to question that.

The BORG culture of mono-views is assimilating everyone.

No, teaching people to be racist and judge other by skin color or other immutable characteristics is never a good thing.

The place CRT has in our public discourse is the same as the place Nazism has and I applaud the plaintiffs for fighting back.

Are we not conflating issues?

The normative question regarding substance (CRT is true or false) is a different issue from silencing people or forcing them to accept a certain philosophy or religion (a process issue). Totalitarians silence/intimidate people to prevent any examination of the truth or falsity of a claim. The behavior of the leftists tells you they fear any honest examination of the truth of CRT. Such fear indicates that they know CRT is false.

True. I have family who have been infected with this brainwashing. They don’t want to have a discussion or debate or hear any opposing views. I tell them that if their view is so righteous then why not discuss it? I am open to hearing a convincing argument for CRT and open borders and other policies. They have yet to make a better argument other than my views are “old fashioned” or “outdated” and “out of line with most others” (meaning their teachers and their friends).

Sorry third grade classrooms are not a marketplace of ideas, neither for that matter is any public school classroom and that is ever.

The question is what values and beliefs are taught there, it isn’t totalitarianism to say radical racialist ideologies like Nazism, CRT and Maoism not be taught at or permitted in public school.

The plaintiffs are exceptionally courageous for standing up to the subversive, mendacious, racist, neo-communist, U.S.-denigrating, Jew-hating, corrosive and poisonous ideology of “Black Lives Matter.” Their example gives one hope that this country may not be irreparably lost.

What do the Democratic supporters of CRT hope to achieve?
A war between races so they can continue to divide and conquer?