“Masks also make us anti-social. They interfere with relations. As the Catholic faith teaches, we are relational beings.” 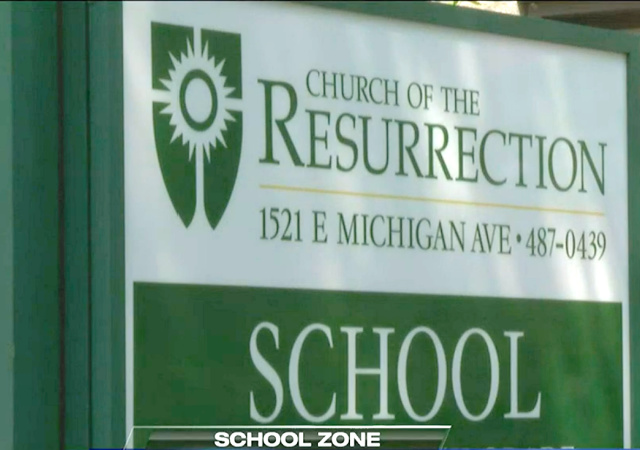 Most private schools sued over mask mandates because of religious liberty concerning the right to worship.

The lawsuit from the Resurrection School in Lansing, MI, could form a new precedent:

In the original lawsuit filed, the school argued against the state-imposed mask mandate on religious grounds, saying it ultimately interferes with Catholic education.

“Unfortunately, a mask shields our humanity,” the lawsuit read. “And because God created us in His image, we are masking that image.”

“Masks also make us anti-social,” the lawsuit said. “They interfere with relations. As the Catholic faith teaches, we are relational beings.”

The U.S. Court of Appeals for the 6th Circuit in Cincinnati will hear the appeal on Wednesday.

The Resurrection School filed the original lawsuit in October 2020 in the U.S. District Court for the Western District of Michigan.

However, “the court denied the school’s request for a preliminary injunction to stop the mask mandate.” The school appealed two days later.

Rev. Steve Mattson, the Church of the Resurrection pastor, said the school did not have school transmissions. Students fifth grade and below never wore a mask:

“We didn’t, over the past year, have any cases of in school transmission,” said Rev. Steve Mattson, Church of the Resurrection pastor.

The lawsuit says the “mask shields our humanity,” “masks God’s image” and “make us anti-social.”

“Teaching is a relationship between individuals, and we know non-verbal interaction is very powerful,” said Rev. Mattson.

Mattson wants to make sure the state cannot instill another mask mandate because “it’s really the students who suffer.”

“It’s the ones who struggle the most that are most harmed by having to wear their mask,” explained Mattson.

The theological argument. It makes sense that a Catholic school would think of it.

But how does it go. Is hiding God’s image necessarily bad? Perhaps it’s modesty, as with other parts of the body. Let the courts decide!

The Court has no jurisdiction over theology (except when it comes to LGBTQIGDRJVDGHQ+, and increasingly with vaxxes, these days).

That probably won’t stop the black-robed tyrants from telling people how they may exercise their religion, though….

Now that’s what I call a prima facie case!

Lawfare, with God on your side.
Sure, why not? It worked for Hobby Lobby.
I wish “philosophies” had the same BOR protection as “religions.”
If my bedrock belief is “liberty and choice” rather than “Supreme Being no one can verify,” isn’t it just as valid?

Moses wore a mask, to hide the light that shone from his face from his conversation with God. (Exodus 34:33)

The LORD Renews the Covenant:
…32And after this all the Israelites came near, and Moses commanded them to do everything that the LORD had told him on Mount Sinai. 33When Moses had finished speaking with them, he put a veil over his face. 34But whenever Moses went in before the LORD to speak with Him, he would remove the veil until he came out. And when he came out, he would tell the Israelites what he had been commanded,…

Should Rev. Steve Mattson go into the hospital for an appendectomy, will he insist the surgeon not wear a mask? Or is he a fool?

It has never been shown that wearing surgical face masks decreases postoperative wound infections. On the contrary, a 50% decrease has been reported after omitting face masks….

Context matters. Viewing pornography is generally sinful but not, for example, if part of a legitimate police investigation. So, masking wearing when it becomes too oppressive generally strays beyond prudence’s middle way.

Well, actually, the kind of masks they are requiring for school children are worthless against respiratory viruses, which COVID-19 is. ALL of the research demonstrates this, including that silly CDC article that found a 1% effect.

But here is what the CDC has to say about other respiratory viruses, such as influenza

Disposable medical masks (also known as surgical masks) are loose-fitting devices that were designed to be worn by medical personnel to protect accidental contamination of patient wounds, and to protect the wearer against splashes or sprays of bodily fluids (36). There is limited evidence for their effectiveness in preventing influenza virus transmission either when worn by the infected person for source control or when worn by uninfected persons to reduce exposure. Our systematic review found no significant effect of face masks on transmission of laboratory-confirmed influenza.

What works is zinc plus an ionophore, applied as soon as symptoms emerge. In a week, you can have the whole school clear, for cheap.

You don’t even have to pull out the big guns at that stage, but you can, again, for cheap and quick resolution.

How many lives could be saved? Even a modest underfunded partially successful vitamin D “supplementation or sunshine” program (“SOS”) could easily cut the death rate in half. Look at the death rate chart. The increase in deaths for the nations with the lowest vitamin D is more than twice that of even the nations that had only modestly better vitamin D levels.

Not an apple and oranges comparison. A surgery is a clean room requirement. Life is not a clean room enviornment.

Looking at their website/letters to parents the argument made by the lawyer is not precisely what the school requires. Over 5th grade they require masks, plus social distancing, one way hallways, and have plastic dividers around desks. One way entrace/exits. Sanitation stations in every room.

Under 5th grade it is parents’ decision on mask based on the child’s individual needs. See through plastic dividers around desks, one wall halls, no contact with any student not in their grade and those with social distancing requirements.

Whitler’s power was chopped somewhat by a petition the legislature passed. She’ll probably use HHS to make up some bullschiff mandates. Basically what she did when the courts ruled against her.

Republican state senators on Thursday approved the repeal of the Michigan law that Gov. Gretchen Whitmer used to order emergency lockdowns at the beginning of the pandemic when Michigan was among the states hardest hit by COVID-19.

The state Senate’s 20-15 vote along partisan lines came two days after the Board of State Canvassers certified Unlock Michigan’s petition drive to repeal the 1945 law Whitmer used to maintain a state of emergency and lockdown past 28 days without the Legislature’s input. The petition received about 460,000 valid signatures, far more than the approximately 340,000 needed.

Because it resulted from a petition drive, Whitmer would not be allowed to veto the repeal if the Republican-led House also approves it, as it’s expected to do. (they did)

The Michigan Supreme Court in October declared the law Whitmer cited unconstitutional. After that decision, Whitmer used the state’s health department to create rules for the pandemic.